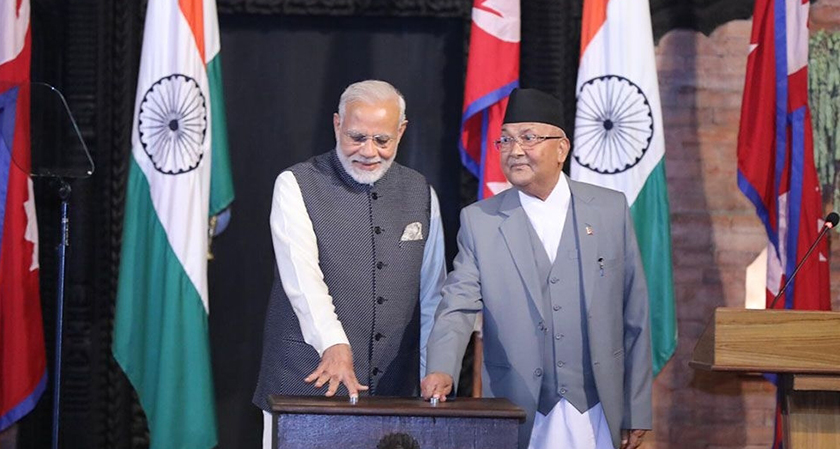 KATHMANDU, May 11: The prime ministers of both Nepal and India jointly laid the foundation stone for the 900 MW Arun III Hydropower Project on Friday. Prime Minister KP Oli and India's Prime Minister Narendra Modi inaugurated the construction of the project by pressing a button during the bilateral talks in Kathmandu on Friday evening. The project is located in Sankhuwasabha district in eastern Nepal.

Two prime ministers pressed remote-control buttons which unveiled a granite plaque at the project site in Sankhuwasabha. The plaque read that the two prime ministers jointly laid the foundation stone. According to government officials, work to divert the Arun River for building a dam is currently underway.

The export-based run-of-the-river project, which is being built by India's government-owned company Sutlej Jal Vidyut Nigam Limited (SJVN), has recently received generation license from the Investment Board, Nepal. The government of Nepal awarded the project through competitive bidding in 2008 and project development agreement with the company was signed after Prime Minister Modi came to power in 2014, particularly after his first visit to Nepal in August 2014.

The project's work at the site in Sankhuwasabha has already started and the Government of India has sanctioned an investment of US $ 854 million (NRs 91 billion) for the project. This is the largest amount of investment inflow for a single project in Nepal till date. The project's estimated cost is US$ 1.2 billion.

Upper Karnali is another major run-of-the-river project, which will be developed by an Indian firm. The project was awarded through an open competition to Indian private company GMR in 2008 and the Government of Nepal signed a project development agreement with GMR in 2014. But this company has not yet done the financial closure for the 900 MW project, which will be developed in western Nepal.