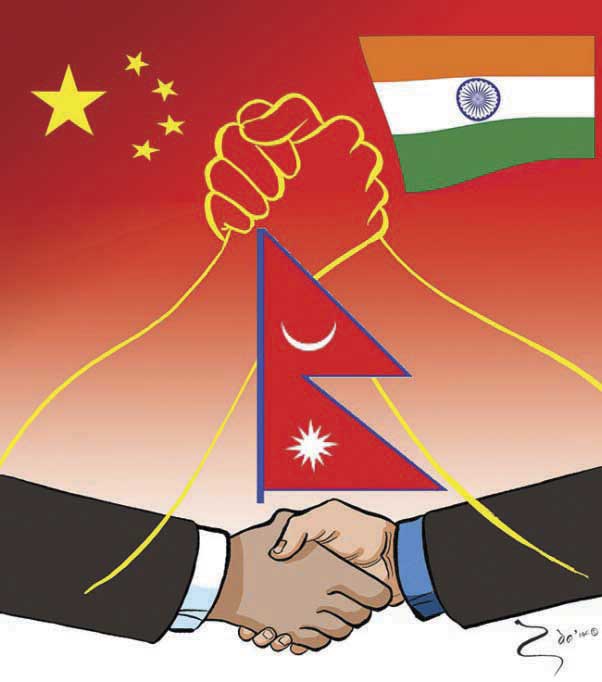 Two economically powerful countries are our permanent neighbors. They should be Nepal’s natural strategic partners for development

The White Paper unveiled by Finance Minister Yubaraj Khatiwada last month presents a bleak economic scenario, if not Damocles’ sword but there are no concrete indications on how the government will tackle the challenges. This could be a political ‘insurance policy’ in case government fails to address the challenges. Clearly, government had no economic blue-print on policy strategies in place. That said it is no exaggeration to say that our economic outlook is bleak.

That Prime Minister K P Oli’s India visit would instantly heal badly bruised relationship between the two countries was like a fable. It is one thing to win election and quite another thing to build divided nation. The deep divides between two countries during Oli’s first term in the office and his party’s continued anti-India raucous during election campaign are still fresh in public memory. Bridging deep and wide gaps on either side of the aisle with a sudden outburst of trust without convergence of interests is premature. Political assurances from India could not be expected to shower with investment funds while being seen capitulating under Nepal’s demand for ‘equal status’ without meaningful progress on unresolved political issues most notably those culminated after India’s blockade to Nepal.

We lost excellent opportunities in
our quest for republicanism and federalism and
missed to see
economic trends.

India’s uncharacteristic gesture during India visit, multiple telephone calls to Oli prior to visit and surprise advance visit of Indian Foreign Minister to Kathmandu were a sort of diplomatic coup de grace, for such moves were unexpected in Nepal. PM Modi’s moves not only surprised the nation and political elites and bureaucrats. India’s pre-emptive moves were timely, smart, and beyond symbolism. Let’s hope Oli understands the significance of this, and develops and enhances proximity into a productive working relationship between the two proud nations.

Despite claims of a breakthrough in mending relation, it is unclear if trust deficit has been adequately bridged to a level both establishments are comfortable to work with. India visit has certainly produced overwhelming reactions with no discernible results. PM Modi has made smart moves and openly displayed friendly gestures to PM KP Oli. If anything turns sour in future it would squarely fall on PM Oli’s lap. At international level, stakes are high.

Global scenario
Despite being the closest US ally in Asia, President Rodrigo Duterte of the Philippines was not deterred from forging economic alliance with China while running, side by side, bitter dispute over sovereignty over South-China Sea claims. Duterte recently said he was befriending President Xi for China now is rich with money to spend. His realistic but pragmatic approach is proving beneficial with China’s increased investments in infrastructure development and tourism sectors without compromising its traditional partnership with the US.

Philippines’s economic diplomacy continues despite some domestic political controversies. Recently, one senior Asian Development Bank expert was quoted by print media by alluding to this growth like a golden age in economic development.
Vietnam and Cambodia in Asia and Rwanda and Ethiopia in Africa have also adopted realistic pragmatic approach allowing former political enemies’ participation in development. These two Asian countries are driving ASEAN growth at much faster rate than China and India.

Nepal needs to be realistic and pragmatic to grab all available opportunities without political prejudices and misgivings. It must not get lost in transition. Economics matters in Nepal as well.

Some observers and political pundits argue that Nepal’s relation with China and India should be based on ‘equi-distance’ or ‘equi-proximity.’ This implies the relationship that is neither close nor mature, nor historically strong nor culturally close. We must not fall into this fallacy. Mature relationship is based on frank and constructive engagement through open dialogues, but with excellent understanding of mutual interests, strengths, weaknesses, capabilities, and respect for each other.

Two economically powerful neighbors are our permanent neighbours. Both should be Nepal’s natural strategic partners for economic development. Government must seek trustworthy partnership and engage with them in development process by not playing India card or China card against them or else we will be losing better economic future for our generation.

What we did and what we are doing with our neighbours since Nepal became a democratic republic could generate never-ending and passionate debate. It will lead us nowhere. The fact is we lost excellent opportunities in our quest for republicanism and federalism and missed to see economic trends and opportunities sweeping the entire region and the world.

We should stop blaming one another other for we too have failed in many respects to see and recognize emerging challenges of political discourses and emerging economic forces. We are still lucky. We should now tie-up with both neighbors in acceleration of our national economic programs.  We should not be playing negative rhetoric, if we expect to maintain healthy relations. Instead, we need to invite and involve them in development streams.

We ought to maximize proximity advantage with clear articulation of each other’s interests, priorities and continue to build economic bonding, and maintain cultural and historical relations. Otherwise we will fail to lead the nation, manage economics and take this country toward the next level. Political leadership must look beyond tunnel vision without blocking realism and pragmatism. Otherwise, economic well-being of citizens will remain a pipe-dream for long.

KATHMANDU: Firebrand leader KP Sharma Oli is back at the helm of affairs in Singha Durbar, two years after he... Read More...

Interaction on Nepal's growth opportunities in the offing

KATHMANDU, July 21: An international team of experts is hosting an interaction in Nepal to suggest the government on tapping the... Read More...

31 staffers including a justice of SC contract COVID-19, apex court to hear only six types of cases from tomorrow
12 hours ago