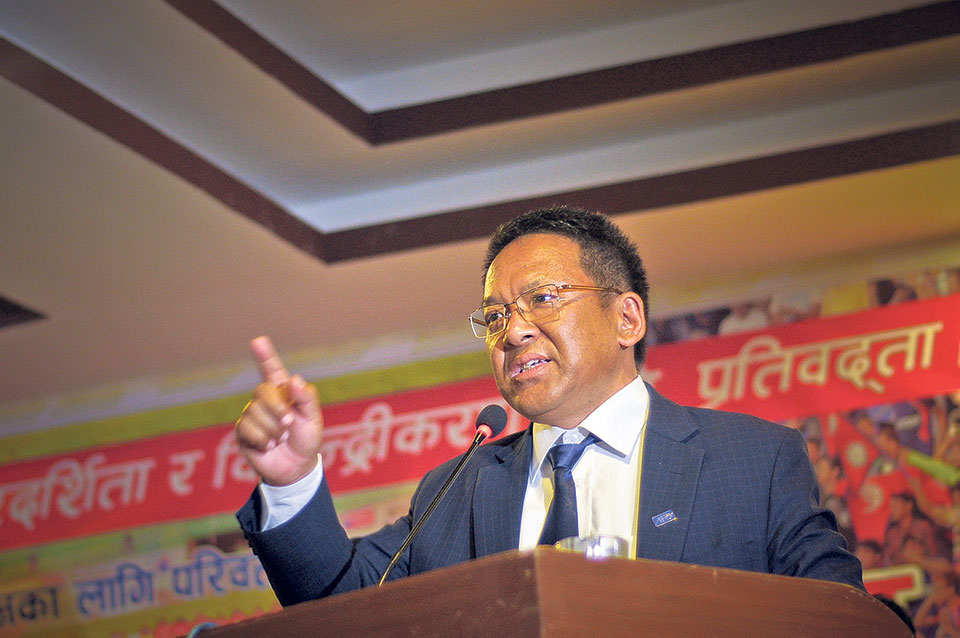 KATHMANDU, May 5: One of the two presidential candidates Karma Chirring Sherpa is likely to get elected as president of the All Nepal Football Association (ANFA) as his rival candidate Mani Kunwar withdrew from the election process on Friday.

The other presidential candidate Kunwar declared not to take part in the Saturday election claiming that the election result will certainly be challenged at the Supreme Court “as the elections is being conducted in contravention of the ANFA statute”.

Despite Kunwar’s withdrawal announcement, his name however will not be deleted from the list of presidential candidate as the nomination period has already been closed. So, technically, there will be two candidates in the process of election for the ANFA’s top post.

“As I am also the coordinator of the statute drafting committee, I stood against the elections as it is being conducted by breaching the laws and statute of the ANFA and I have decided to pull out from the election process,’’ said ANFA’s senior vice-president Kunwar, at a press meet in Kathmandu. “The dreams of those who are hell-bent only to get the top post and only for their personal benefits even by holding an illegitimate election will never be fulfilled. We will foil such conspiracies. We will continuously fight for electing proper leadership in accordance with the ANFA’s statute.’’

After hearing on the writ petition, a single bench of justice Ramesh Raj Pokharel, refusing to issue an interim order to stay the elections, had issued a 15-day show-cause order to petitioners.
While the decision of the court was welcomed by the Sherpa panel saying that the court always stands for truth, the Kunwar panel claimed that it was erroneous. Kunwar was of the view that it would not be right to conduct the election in this situation as the court is yet to issue the final verdict.

“It is our duty to obey the decision of the court. I respect the decision as I believe in the rule of law and statute. But, we fully disagree with the Thursday’s ruling of the Kathmandu High Court,’’ Kunwar further added. “Since the case is still sub judice in the court, we are fully confident in getting justice from the court’s final verdict because the ANFA statute has clearly stated that a 60-day notice must be issued prior to the election.’’

Along with Kunwar, vice-presidential candidate from the same panel Ganesh Bahadur Chand, who is also President of the Kanchanpur District Football Association, has also announced to boycott the election. Chand said he decided to withdraw from the elections as he was also one of the petitioners to file the case, which is not yet settled.

As Sherpa remains the only candidate for the presidential post, he is most likely to be elected to the ANFA’s top post. Sherpa has been challenging the leadership of the ANFA for years. He always raised issues of transparency, good governance and change among others.

The current president Narendra Shrestha, who is preparing to retire from football leadership after the elections by handing over the leadership to the newly-elected team, said that despite Kunwar’s decision, one can’t be declared elected unopposed. The election committee must complete all the election process taking both of them as official candidates for the post.

“Kunwar’s withdrawal has only been announced in a press conference. All the elections process will be followed thoroughly as the deadline to withdraw any candidacy has already crossed and one can’t be elected unopposed,’’ said Shrestha. “I will retire once the new leader is elected.’’

KATHMANDU, April 26: With the High Court Patan withdrawing on Wednesday its interim order to stay the elections of All Nepal... Read More...

Govt awards construction contract of flyover in Gwarko, Lalitpur
57 minutes ago
Residents can install EVs charging units for their personal use: NEA
12 hours ago