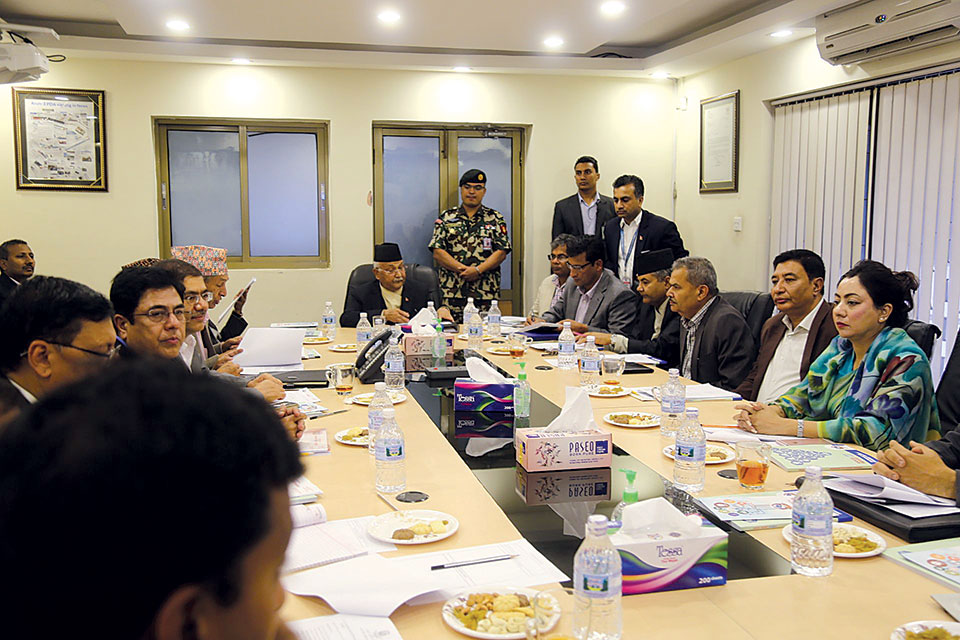 KATHMANDU, April 30: With limited projects in its ambit, Investment Board Nepal (IBN) has now started exploring new projects, which will be later showcased at different forums to draw foreign investments.

The IBN’s board meeting on Saturday decided to conduct feasibility study of five different mega projects. The projects, if found feasible both technically and financially, will later be awarded through open competition.

The meeting led by Prime Minister Khadga Prasad Oli has approved the documents for inviting expression of interest from interested firms and companies for feasibility study of five projects -- a glass mine industry, Shey Foksundo luxury resort, an integrated agriculture project, a ski resort, and a city of health, education and sports.

The IBN’s spokesperson Uttam Bhakta Wagle said firms or companies that are selected will conduct feasibility study within the next six months. The IBN said all projects will be awarded to the prospective developer through competitive bidding.

Having very few projects with it, the IBN has now started exploring new projects, as several other projects that are to be implemented by the board are either denied or taken away secretly by private parties.

Unlike his predecessors, Oli has put the IBN’s work in priority. He has already called two meetings of the board after assuming office. The IBN, which is for mega projects dealing with investments of over Rs 10 billion or 500 MW in case of hydropower projects, has so far been neglected. The ministries have been denying to hand over projects such as Upper Tamakoshi III (650 MW), Kathmandu-Tarai Expressway, and Budhigandaki Hydropower Project to the board.

Upper Tamakoshi III project has secretly been awarded to a company of Bhawan Bhatta, president of Non-Resident Nepali Association, while the expressway was handed over to Nepal Army.

Budhigadaki remains undecided at the moment, but it is expected to be awarded again to the Chinese company, with which former government of Prime Minister Sher Bahadur Deuba had terminated project contract that was signed by his predecessor Prime Minister Pushpa Kamal Dahal. The project was initially awarded without competition. On the other hand, the Ministry of Energy is not handing over projects of above 500 MW to the IBN despite clear legal provisions to do so.

In addition to the new initiative, IBN has also approved a proposal to allow Muktinath Darshan Pvt Ltd to conduct detailed project report (DPR) for building a cable car from Bire Thati to Muktinath, according to a press release from the IBN. But the government will not bear any cost incurred on the DPR.

Likewise, the IBN will soon begin a process of carrying out detailed project report of metro rail along Nagdhunga-Kalanki-Koteshor-Dhulikhel. This will be an extension of a study of metro rail in the ring road area in Kathmandu, conducted with assistance from the Korean government few years ago. Expression of interest will be invited from private firms and companies for the study. According to IBN officials, this project might be feasible in line with the government’s proposal of building satellite cities in Kathmandu and its periphery.

Likewise, the IBN will also conduct two separate studies on exploring potential solar projects and a new special economic zone for setting up industries. Funding for this study will be done through DFID grant. The board IBN has also planned to conduct screening of mega hydropower projects and promote them to invite investors, for which support will be received from the World Bank.

Over 10,000 people enter Nepal via Gaddachauki in a week for Dashain
19 minutes ago

Coronavirus infection confirmed in 38 people on Wednesday
59 minutes ago