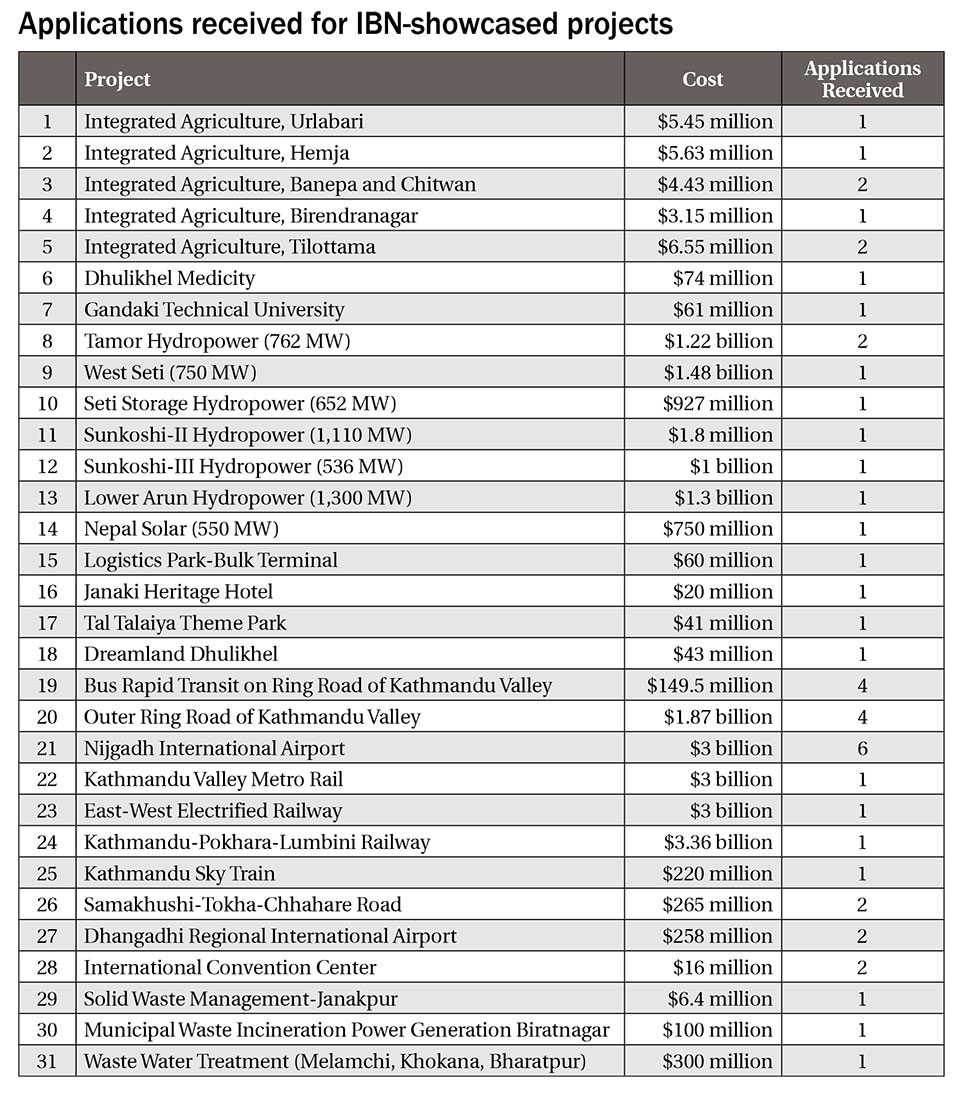 KATHMANDU, April 22: Investment Board Nepal (IBN) has said that it has received as many 48 applications for 31 out of 50 projects showcased during the recently held Nepal Investment Summit 2019.

Cost of these 31 projects are more than Rs 2,500 billion, IBN said in a press release issued on Sunday.

“As many as six investors, the largest number for a single project, have applied to build Nijgadh International Airport,” the IBN added in the statement.

“The IBN has divided the projects into three categories. We will review the applications accordingly,” IBN CEO Maha Prasad Adhikari said.

According to Adhikari, 27 projects have been kept in the first category. IBN plans to select eligible developers for these projects within three months, or by August 20. The IBN will review their Expression of Interest (EoI).

IBN will select developers for the  projects in second category within nine months or by February 20,2020. Developer of these projects will be selected by reviewing their Request for Proposals (RFP). There are 17 projects in this category.

Projects in the third category are big and are of complex nature. The IBN plans to take help of an expert team or transaction advisory services which are led by secretaries of concerned ministries. There are six projects in the category and the IBN plans to select developers for them within 14 months or by August 20, 2020.

The meeting of board of directors of the IBN held last week decided to form a six-member panel under the Secretary of the Office of the Prime Minister and the Council of Ministers, who oversees infrastructure sector, to evaluate the applications and implementation of 15 memorandums of understanding signed during the investment summit. The panel will have joint secretaries of Ministry of Physical Infrastructure and Transport, Ministry of Culture, Tourism and Civil Aviation, Ministry of Energy and Water Resources, and Ministry of Industry, Commerce and Supplies and the IBN as members.

IBN officials say they are still studying how they can facilitate development of 27 projects showcased by the private sector during the summit.

KATHMANDU, April 30: With limited projects in its ambit, Investment Board Nepal (IBN) has now started exploring new projects, which will... Read More...