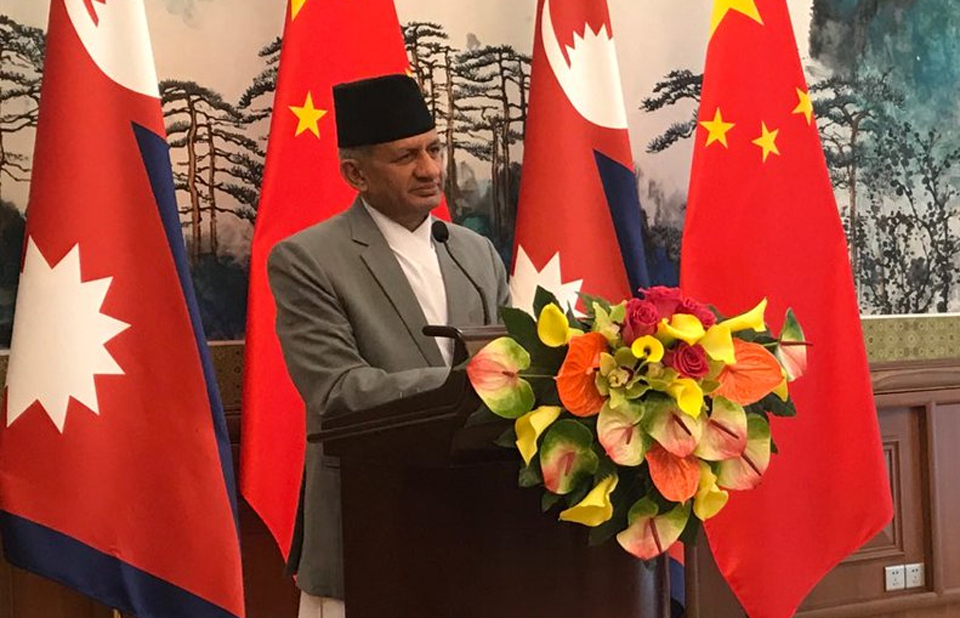 KATHMANDU, April 20: Minister for Foreign Affairs Pradeep Kumar Gyawali has stated that Nepal and China were set to gear up their cooperation to a new height for mutual benefit and win-win outcomes.

He stressed that it was a moment of pride for Nepal to work together with China in the historic mission of Belt and Road Initiative (BRI) for greater peace, prosperity, and harmony.

Addressing a talk program on Nepal-China Relations and Development Prospects in Trans-Himalayan Region at the Sichuan University in Chengdu of China today, he said the projects under the proposed Belt and Road Initiative encompassing cross-border roads, railways, oil pipelines, information highways, energy grids, skyways and transmission highways should aim at utilizing the rich resources along the Himalayan range, and improve the quality of lives of peoples in those areas.

He observed, "At a time of historic socio-economic transformation across the globe where poverty levels have fallen down to record lows and global prosperity has shored, we cannot afford to let underdevelopment and poverty wean the talents and promise of people anywhere in the world."

Dwelling upon his meetings with senior leaders in Beijing, he said that the scope of further enhancing co-operation between Nepal and China was on top of his current visit and China had remained an enthusiastic supporter of Nepal's developmental efforts.

Foreign Minister Gyawali said that the development of infrastructures along the trans-Himalayan region was critical for promoting economic opportunities by ensuring efficient movement of people, services and goods across the region.

"Time is ripe now to revive the ancient glory acquired from exchanges between Nepal and China. Nepal stands ready to work together for trade and economic integration towards common prosperity," he said.

He laid emphasis on enhanced cooperation between Nepal and China for building the critical infrastructure in the Himalayan region and removing the barriers for a seamless movement of people, goods and services.

The Minister for Foreign Affairs appreciated Sichuan University for being at the forefront of supporting socio-economic development through education, and science and technology. RSS