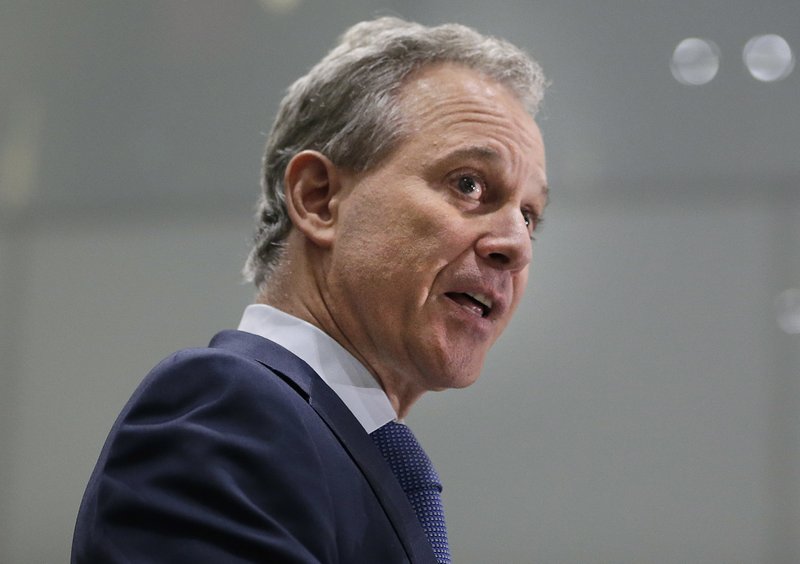 FILE - In this Wednesday, Sept. 6, 2017, file photo, New York Attorney General Eric Schneiderman speaks at a news conference in New York. Four women who have had romantic relationships with Schneiderman have accused him of physically abusing them, and two of the women spoke on record to The New Yorker, which published their claims, on Monday, May 7, 2018. (AP Photo/Seth Wenig, File)

NEW YORK, May 8: New York Attorney General Eric Schneiderman, whose office has taken on a high-profile role in the fight against sexual misconduct, was physically violent with four women he was romantically involved with, according to their accounts which were published on Monday in The New Yorker .

Two women spoke on the record, saying Schneiderman repeatedly hit them during the course of their relationships with him in recent years, and never with their consent. Neither woman filed any police complaints, but both said they sought out medical attention and confided in people close to them about the abuse.

A third woman who also was involved with him told her story to the other two women, but said she was too frightened to come forward. A fourth woman said Schneiderman slapped her when she rebuffed him, but also asked to remain unidentified. The New Yorker said it vetted the third woman’s allegations, and saw a photo of what the fourth woman said was her injury.

The accusations led Democratic New York Gov. Andrew Cuomo to call for an investigation and for Schneiderman to immediately resign.

The two women who spoke on the record, Michelle Manning Barish and Tanya Selvaratnam, both said the physical abuse escalated over time, including choking and hitting, and that Schneiderman also was a heavy drinker. The Associated Press is identifying the women because they agreed to tell their stories publicly.

Manning Barish said Schneiderman started getting violent a few weeks after they began dating, slapping her one night after an evening out and escalating to choking her. She said she confided in friends, including novelist Salman Rushdie.

Asked for comment, Schneiderman, a Democrat, issued a statement to The New Yorker saying, “In the privacy of intimate relationships, I have engaged in role-playing and other consensual sexual activity. I have not assaulted anyone. I have never engaged in non-consensual sex, which is a line I would not cross.”

His representatives sent the same statement to The Associated Press when asked about the accusations. They also sent a statement from his ex-wife, Jennifer Cunningham, who said, “I’ve known Eric for nearly 35 years as a husband, father and friend. These allegations are completely inconsistent with the man I know, who has always been someone of the highest character, outstanding values and a loving father. I find it impossible to believe these allegations are true.”

Cuomo in his statement said, “No one is above the law, including New York’s top legal officer. I will be asking an appropriate New York District Attorney(s) to commence an immediate investigation, and proceed as the facts merits.”

He said that his “personal opinion is that, given the damning pattern of facts and corroboration laid out in the article, I do not believe it is possible for Eric Schneiderman to continue to serve as Attorney General, and for the good of the office, he should resign.”

Schneiderman has been a vocal supporter of the #MeToo movement. He filed a lawsuit in February against movie producer Harvey Weinstein and the Weinstein Co. following an investigation into allegations of sexual misconduct, saying the company broke New York law by failing to protect employees from “pervasive sexual harassment, intimidation and discrimination.”

He launched a civil rights probe into the New York City-based company in October after The New York Times and The New Yorker exposed allegations of sexual assault and harassment spanning decades. The company later fired Weinstein.

The women accusing him said seeing him speak out on sexual misconduct issues was part of the impetus in them coming forward.

“This is a man who has staked his entire career, his personal narrative, on being a champion for women publicly,” Selvaratnam said. “But he abuses them privately. He needs to be called out.”

Schneiderman, who won a state Senate seat representing a Manhattan district in 1998, became attorney general in 2010 and is running for re-election this year. He has a history of recognition for activism on behalf of women’s causes, including reproductive rights.

The 63-year-old also has been a longtime critic of President Donald Trump, and has been part of several efforts to push back against some of his actions in the White House, like the rescinding of protection for immigrants brought to the U.S. illegally as children.

Last month, he urged state lawmakers to close a loophole that he said could be used to fight state charges by anyone who has received a federal pardon for similar federal charges.

A Republican opponent, Manny Alicandro, had just officially launched his candidacy on Monday. After The New Yorker report, Alicandro said, “If true, he is a disgrace and wholly unfit for the role of New York State’s chief legal officer. I believe the accusers. He needs to resign his office effective immediately and the New York City Police Department needs to get to work.”

NEW YORK, May 8: The Latest on allegations of physical abuse against New York’s attorney general (all times local): ... Read More...

When I was in high school and college whenever I read or heard stories of abuse and domestic violence I... Read More...