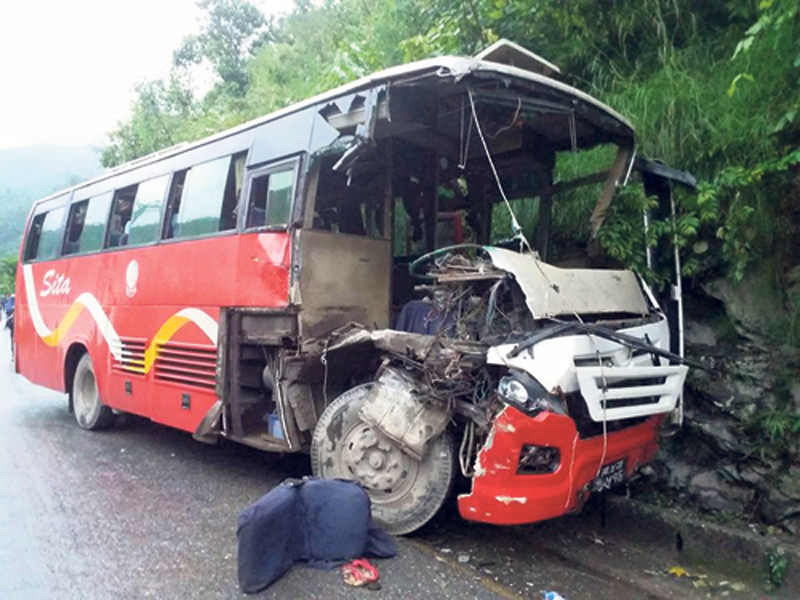 One of the two buses that collided along the Muglin-Kurintar section of the Prithvi Highway on Tuesday evening. Four people died in the accident while 29 were injured. The photo was taken Wednesday. (Photo courtesy: Hira Lal Gurung)

CHITWAN, Aug 17: In yet another road accident, four people, including a 10-month-old infant, lost their lives and 29 others sustained injuries when two passenger buses collided head-on in Chitwan district along Mugling-Kurintar road section of Prithvi Highway on Tuesday evening.

A bus (Lu 1 Kha 9361) was heading to Kathmandu from Bhairahawa when it collided with another bus (Na 4 Kha 4516) en route to Dharan from Kathmandu, according to the District Police Office (DPO), Chitwan.

“Our preliminary investigation shows that overspeeding at a turning section caused the collusion,” said Superintendent of Police (SP) Basanta Kunwar of the DPO. “However, as both the bus drivers are injured and currently undergoing treatment, we are yet to get more information about the matter,” he added.

As it was raining lightly at the time of accident, police suspect it may also have contributed to the accident.

Among the deceased are Manju Gautam, 22, of Jugum VDC-8, Gulmi district, her 10-month-old infant Sanyog, and Samjhana Chepang of Rapti Municipality-1, Chitwan district. Identity of a man who also died in the accident could not been ascertained as of Wednesday evening.

SARLAHI, Oct 9: As many as 65 people were injured in a bus collision in Makawanpur district on Sunday morning. Read More...

Prime Minister moving to new residence with bunkers
12 hours ago

Prime Minister moving to new residence with bunkers
12 hours ago