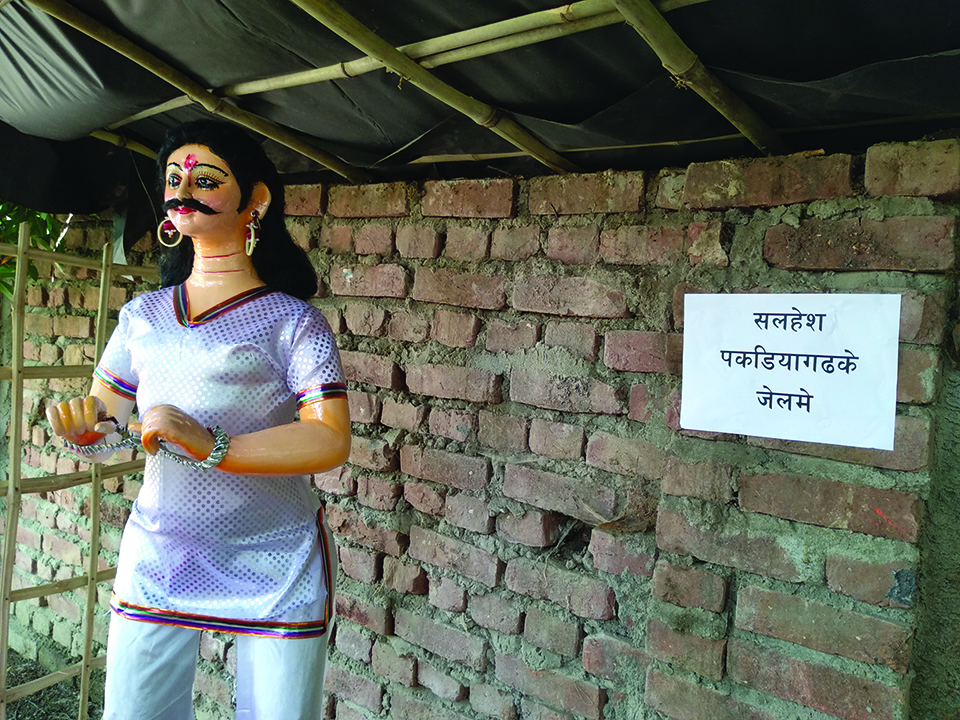 Photo by: Mithilesh Yadav  A statue of King Sahlesh with handcuffs is placed nearby the Malini Temple in Lahan in this recent picture.

LAHAN, April 15: Religious and historical sites related to Mithila King Salhesh receive visitors mostly during annual celebrations related to the king. A fair is organized in Lahan every year that centers around the legendry deeds the king did.

The king is believed to have reigned over the Mithila region about 1,500 years ago and is widely revered in Mithila folklores and imagination. Legends and folklores associated with the king center around his initiatives for delivering justice, social and economic development, cohesion in society and his immortalized love story. These are widely popular lore in the Madhesi community.
On Saturday, coinciding the new year, people from the Mithila community celebrated the special day while stressing that the king's action and deeds should act as inspiration for the present leaders.

Province 2 is rich in many aspects, but we need to recognize and promote the lesser known personalities and sites associated with them. - Swarup Mahato, Lahan

According to Swarup Mahato of Lahan, who has been a part of the campaign that aims to accord the status of national luminary to the king, much remains to be done to make the king's deed known to the world. He claimed that initiating discourses on the king's achievement and life by relating them to religious sites in the Madhes region will also help in promoting culture and tourism.

“It is good to know that the provincial government's plans and policies have mentioned of utilizing the sites associated with the king in promoting tourism in the region. We will be further pushing the government to implement the plan for developing this into a tourism site,” he added.

He claimed that a special trekking circuit should be developed by connecting religious sites related to the king. Such circuits, he stated, will play crucial role in bringing to the fore the achievements of the king while also serving as a great tourist attraction. As part of their campaign to given recognition to the king, the campaigners are presently collecting signatures for the people to support their cause.

Apart from these efforts, Mahato said efforts to make biopic centering on the king's life is also underway. The movie named 'Sahlesh: The People's Hero is presently in its initial phase, he informed.

“Province 2 is rich in many aspects, but we need to recognize and promote the lesser known personalities and sites associated with them. We only know about popular temples like the Janaki Mai, Gadhi Mai, Chhanamasta Mai temples. But people rarely know about the sites related to King Sahlesh. Stories related to him are gold, and we need to dig them out, polish and present to the public,” he noted.
Locals believe that proper promotion of cultural, historical or religious sites of the province will open multiple doors of development. They urge that apart from focusing on the development of the agricultural sector, the region should also focus on tourism development.

Mahato stated that the younger generation is less likely to engage in agriculture unless they are familiar to modern technologies and equipments. To generate employment opportunities for this segment of the population, promoting Mithila culture should be a core component of tourism development.

"This a 1500 year-old-history and few people outside the Mithila region know about it," said Mahato. "If we are able to bring all the aspects of the king's life, his time, his deeds as a ruler and his role in maintain social harmony and cohesion, viewers will be thrilled. In fact, we are living such a time where we need to learn a lot from him," he added.

For the locals of Mithila, the fair organized on the first day of Nepali New Year is an age-old tradition that centers around the folklore about the king. As per the folk tale, King Sahlesh used to visit his garden to collect flowers regularly. Princess of Pakriyagardh also used frequent the same garden for flowers. One day, she expressed her love for him. But Sahlesh showed no interest towards her. This enraged the princess who then complained to her father that the man picking flowers in the garden was some thief.

Sahlesh was taken captive by the king and put behind the bars. As he did not return the overtures of princes, he was further accused and convicted of stealing the princes necklace. The king decided that Sahlesh should be hanged. However, King Sahlesh's beloved came to his rescue. With her breathtaking beauty, she hypnotized all the prison guards and the freed him. The two have many other interesting episodes of great love.

It is believed that the flower that blossom at the site in Lahan serve as a reminder for their pure love to the world. The flower that blooms on every first day of Nepali New Year attracts tourists from not only inside the country but also for India. The site is four kilometers away from Lahan and is considered highly important from archeological, religious, cultural and historical point of view.

Nearby the Malini temple where the flower blossoms, there is a temple of Sahlesh. People who know the story visit both the temples with great interest.

Debates on naming of Province 2

Instead of inserting an elitist identity of Mithila, it would serve greatly if “Tharuhat,” an identity of a subdued community,... Read More...

KATHMANDU, June 2: Nepa-laya’s next -- Ranahăr’, meaning defeat in war-- is a fictionalized account of the historical portrayal of the... Read More...