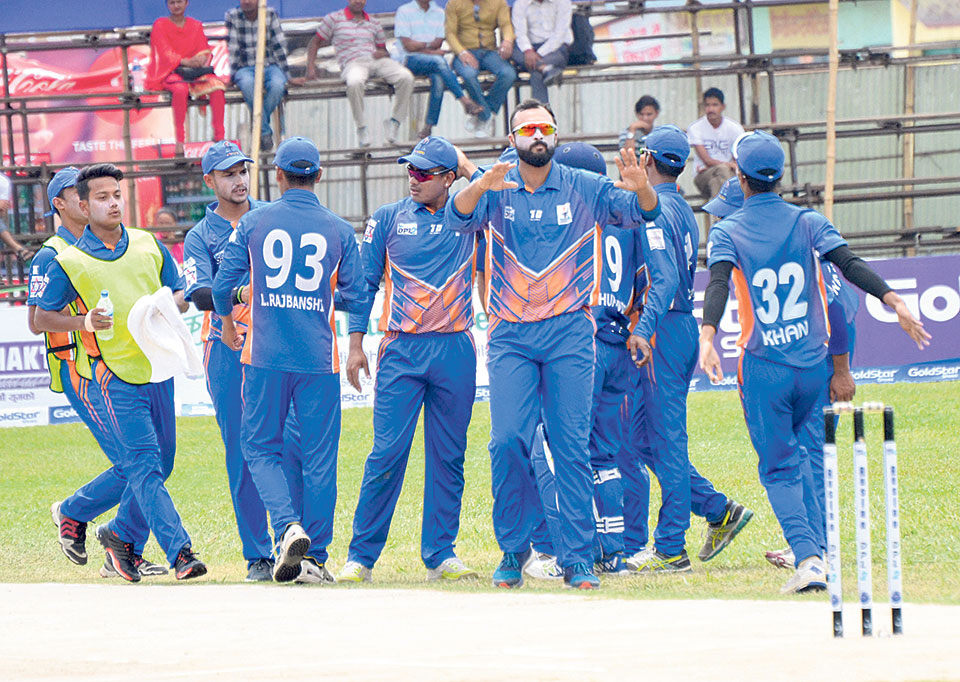 DHANGADHI, April 13: Kathmandu Goldens has advanced into the final of the ongoing second Dhangadhi Premier League (DPL) with a five-wicket victory over Mahendranagar United in the qualifier two match played on Thursday.

After losing to Team Chauraha Dhangadhi by one wicket in the qualifier one on Tuesday, Kathmandu got another chance to contest for title and played against the winner of the eliminator match Mahendranagar United, who beat CYC Attariya by 15 runs on the same day.

Kathmandu won the toss and elected to field first and was given a target of 143 runs for the loss of nine wickets in the allotted 20 overs by Mahendranagar in the match played at the Seti Zone Police Cricket Ground. In reply, Kathmandu chased the target for the loss of five wickets in 18.2 overs.
Mahendranagar did not start brightly as the first four batsmen managed to make only seven runs between them, while the score until 4.6 overs was 10-6.

The two openers captain Binod Bhandari and Aasif Sheikh went out for ducks, while Punit Bisht made seven runs and Harishankar Shah was out for a duck.

Puneet Mehra was the standout player for Mahendranagar as he hit 58 runs off 42 balls including four sixes and four fours, while Aarif Sheikh scored 43 runs off 39 balls which included a six and four boundaries. Karan KC, coming down the order for the losing team, contributed 21 runs off 12 balls comprising of two sixes.

But, no other batsman could add runs to the board for Mahendranagar. Rohit Kumar Paudel and Bhuvan Karki also returned to the pavilion for ducks. Robeen Chhetri did not get a chance to face a single ball.

Sunny Patel became the first bowler to take more than four wickets in the tournament as he pocketed six wickets giving away 10 runs in the four overs he bowled. With an economy of a staggering 2.5 in the match, he has also become the highest wicket taker of the tournament with 12 from seven matches. Likewise, Suboth Bhati and Pushpa Thapa nicked a wicket each for Kathmandu.

In reply, Kathmandu started better than Mahendranagar as their first wicket fell for 76-1 in 5.3 overs. The opener Amit Shrestha was the first Kathmandu player to go back to the pavilion making 26 runs off 19 balls including five boundaries.

The standout batsman for the winning team was the other opener Bhati as he scored 52 runs off 18 balls which included five sixes and four fours. Likewise, captain Gyanendra Malla again showed another decent batting as he added 25 runs off 31 balls comprising a six and a four, while Bhupendra Thapa hit 15 runs off 21 balls with a six. Thapa hit nine, Naresh Budayair scored seven and Patel made five runs for Kathmandu.

Mahendranagar bowlers could not do much against Kathmandu as the most wicket taker for the losing side was Mehra, who took two wickets giving away 15 runs in the four overs he bowled. Likewise, Karki, Bisht and Chhetri nicked a wicket each.

The Indian recruit Patel was named the man-of-the-match and was prized with Rs 10,000.
Kathmandu will take on Chauraha again for the title on Friday as the former will be looking to get their first DPL title and strip off Chauraha, who are vying to get their second consecutive title.