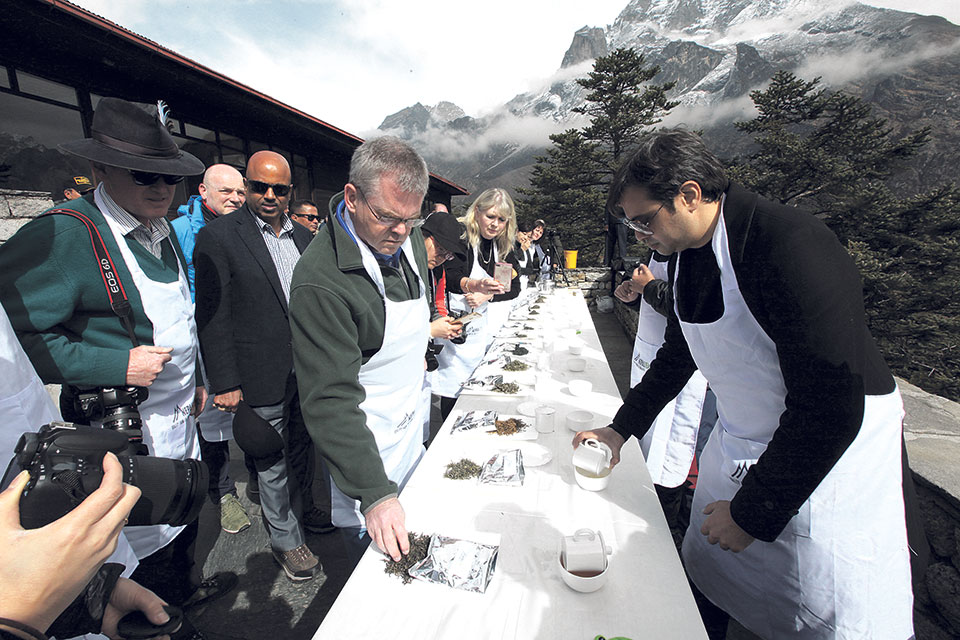 KATHMANDU, April 8: A tea tasting event was conducted at the Everest region on Saturday as part of the ongoing Third International Tea Festival.

The three-day festival organized by National Tea and Coffee Development Board is currently going on at the capital city Kathmandu.

The tea tasting event in Syangboche in the Everest region was organized in order to promote Nepali tea in the international market.

Deepak Khanal, president of the board, said that 29 foreigners from 13 different countries participated in the tea tasting event. They tasted several products of Nepali tea producers.

"A logo of Nepali tea also has been launched from the Everest region," Khanal added.

The event was inaugurated by Minister for Agriculture, Land management and Cooperatives Chakrapani Khanal, .

Speaking at the inauguration ceremony, Minister Khanal  said that the ministry would play a role of mediator to carry Nepali tea to the international market.

"More than half of the population of Nepal is dependent on agriculture. I assure you that the government will not take any excuses for the development of agriculture," Minister Khanal said.

The minister further committed to bring new strategies to promote Nepali products in the international market.

Currently 28,000 hectares of land in the country have been covered by tea farming, of which most of the land lies in the eastern part of the country.

According to National Tea and Coffee Development Board, every year 24 million kilograms of tea is being produced in Nepal, of which 5.5 million kilogram tea is orthodox tea.

'Hello Doctor' to be launched in the Everest region