No new accord with India that harms Nepal's interest: PM 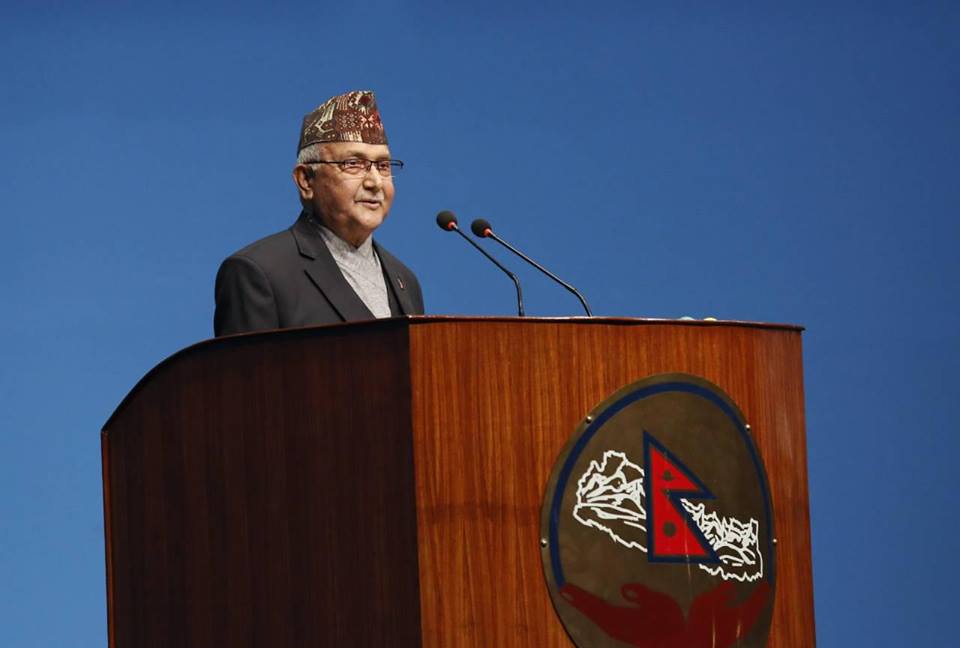 KATHMANDU, April 4: Prime Minister K P Sharma Oli has said that there will be no new agreements or understandings during his state visit to India that will humiliate Nepal or undermine her standing and dignity.

In his briefing to the House of Representatives about his three-day visit to India beginning April 6, Prime Minister Oli clarified that he was not in favor of entering into any new agreements that would harm Nepal's national interest.

The prime minister is paying a three-day state visit to India at the friendly invitation of Indian Prime Minister Narendra Modi. A cabinet meeting held here Tuesday approved the visit.

Addressing parliament, Prime Minister Oli said that the visit is aimed at deepening the relations that have subsisted between Nepal and India since ages.  “We want to maintain relations with India that are free of mistrust and misgivings. We will maintain relations that are dignified and not do anything that will humiliate the country or require her to bow down,” the prime minister said.

Arguing that the main agenda of his government is to expedite the development in the country, Prime Minister Oli said he expects his visit to ensure mutually cooperative relations with India. “I will focus on how to make the visit as result-oriented as possible for the country and the people,” he further said.

Oli also said the visit will focus on bringing past deals into implementation. “Instead of focusing on the number of agreements, my efforts will be to see how to expedite the implementation of agreements already reached in the past,” he added.

The prime minister went on to say that no one can harm the friendly relations subsisting between Nepal and India inspite of some elements that are trying to do just that. That again brings us to the point of improvement in ties. If we put forth our stance clearly and in a friendly and confident manner, bilateral relations will get strong,” he added.
Oli said his government will also maintain friendly, balanced and mutually beneficial relations with all neighbors.

Besides briefing parliament about his India visit, the prime minister also responded to questions raised by parliamentarians. In a stern warning to the Netra Bikram Chanda (Biplab)-led Maoists, Prime Minister Oli said the government won't tolerate any activities that create terror and violence in society.

He said the government will leave no stone unturned to punish those involved in creating terror and extorting from people in the name of a revolution. “I say this with determination: the government shall counter such activities. This is the demand of the time and the wish of the people. The government will not tolerate; will not countenance such doings,” the prime minister added.

PM leading 53-member  jumbo team to India
KATHMANDU, April 4: Prime Minister KP Sharma Oli is leaving for southern neighbor India at the invitation of Indian Prime Minister Narendra Modi on Friday. The prime minister will be leading a 53-member jumbo team for the April 6-8 trip.
The entourage includes 44 members including journalists from private media houses from Nepal and nine others from Delhi-based Nepali Embassy. A cabinet meeting on Tuesday has finalized the delegation of the government team while the list of those from the private sector joining the delegation is being prepared.
The announcement of the jumbo delegation comes amid Prime Minister Oli and his cabinet colleagues making public remarks that the government would exercise austerity measures to cut down the government expenses.