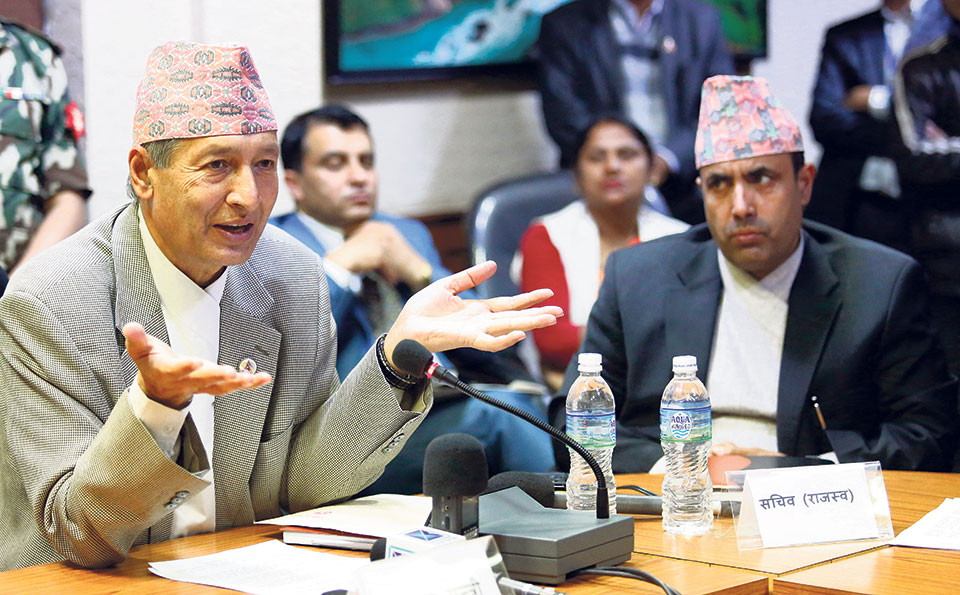 KATHMANDU, March 31: Minister for Finance Yuba Raj Khatiwada has said the economy is rife with challenges with only few indicators on the positive side.

Unveiling ‘white paper on country’s current economic status’ exactly a month after he assumed office, the technocrat has carried out a diagnosis of the economy and portrayed the economy in a bad shape.

Khatiwada, tabling the white paper in the National Assembly and House of Representatives separately on Friday, criticized past governments, and also the policies of Nepali Congress on privatization of public enterprises, saying they have not generated any revenue to the government due to flawed modality of privatization and process.

He was also blunt on several issues like of banks’ lending on an unproductive sector -- the stock market -- which he termed as ‘limited only to banking sector’ and ‘unreliable’.

“Real economic activities have not expanded. There is a height of both fiscal and financial indiscipline,” he said. In the annual budget of Rs 1.28 trillion, there is no source of funding for Rs 200 billion, he added.

Khatiwada was picked as the finance minister by Prime Minister K P Oli, disappointing many political aspirants of the coveted post.

“There is a vicious circle of revenue generation on import and remittance-fueled consumption of imported goods,” the white paper states.

“Not all agreed foreign assistance has been utilized and lacking is effective use of same,” according to the white paper.

Khatiwada, who knows the economy inside out, also claimed that mobilization of capital by financial sector is delinked to the economic growth.

Khatiwada, who had earlier capped real estate financing during his tenure as the governor of Nepal Rastra Bank, also said that over three fourth of the credit of the financial sector as of mid-February has been disbursed on assets as collateral with inflated valuation.

“The government treasury is empty due to fiscal indiscipline. Tax discount was given against established system and norms, and several projects were distributed out of budget in the name of resource assurances,” the white paper stated.

The activities of capital formation are slow and development projects have seen both time and cost overrun. Recurrent expenditure is 110 percent of the revenue collection target for the current fiscal year, and the revenue goes mainly for paying salary and regular spending.

Khatiwada stressed on increasing income of farmers promptly to end poverty that stands at 36 percent of total population. He also stressed on bringing in foreign investment, which is only around 1 percent of GDP, and creating jobs.

Toward the end of the white paper, Khatiwada briefly talked about the course ahead for the country, which includes controlling current financial indiscipline The minister has also said that endorsement and implementation of an ‘austerity policy’ would be needed. “The government will increase tax base, control revenue leakage and make better use of information technology in the billing system. Financial sector will be made stable and disciplined to mobilize financial instruments towards productive use and enhancement of quality services,” says the white paper.

Talking to the media at the Ministry of Finance, Khatiwada said that he will chart out the details of programs and activities to address challenging economic status in the upcoming budget that will be tabled in the first week of May.