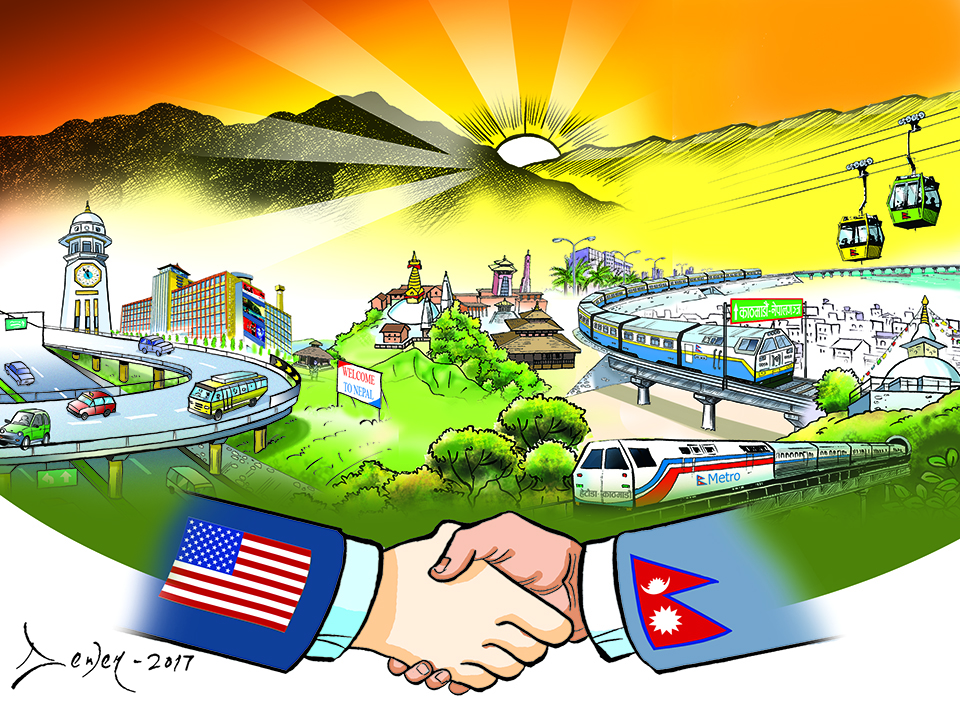 Although Nepal has struggled to emerge from poverty for decades, I believe it already possesses the fundamental economic ingredients needed to fuel broad-based economic growth and job creation.  Last year’s elections created a clear mandate and public expectation that the government will develop a modern economic framework, one that must promote international best practices to address some of the pervasive challenges that have stymied growth.  Bold reforms can help spur economic development.  Adding these reforms to the ingredients the country already has, I am confident Nepal can join and even surpass its neighbors on the path to prosperity.

The most successful free market environments are those where the government has enabled—but not attempted to direct or control—the economy.  Enabling economic growth requires vision, a strategy, openness to international norms, receptivity to entrepreneurial creativity, the ability to match words with actions, and precision streamlining of oversight, tax, and registration or licensing regimes.  If the government gets policies, laws, and regulations right, then the private sector is empowered to develop, adjust, and create opportunities that result in new jobs.  Strong economic policies will both attract foreign investment, and grow a spirit of local investment, innovation and entrepreneurship.  A foundation of solid economic policy results in more domestic and international investment, more jobs, new opportunities, less vulnerability to external shocks, and even a reduction of Nepal’s trade imbalance.

Nepal has economic advantages that other developing countries lack.  This country’s macroeconomic indicators are encouraging with low unemployment and a manageable level of debt while resources are available to support economic development.  While many developing countries routinely spend far more than their budgets would allow, Nepal underspends.  Last year, the government spent just 75 percent of its allocated budget.  Not being able to fully spend its budget is a reflection of a bureaucracy that rewards inaction.  With too many layers of subjective approvals and decision paralysis stalling progress, critical infrastructure projects take years to complete, and are sometimes abandoned, even though the money for those projects is in the treasury.  With hundreds of millions of dollars not being injected into the economy, the private sector suffers, too.  So, the central government should improve its budget execution.  At the same time, the shift to federalism presents an opportunity for provincial and local governments to ensure that government funds are used transparently and effectively to provide public goods and to generate local level initiatives to advance economic growth.  Public participation in local governance mechanisms can ensure that this happens.

Nepal also has a geographical advantage, since South Asia is the fastest growing region in the world.  According to the World Bank, India averaged 7.4 percent GDP growth, Bangladesh averaged 6.2 percent, and Sri Lanka averaged 5.9 percent, while Nepal managed four percent GDP growth over the past decade.  A recent report by the Brookings Institute notes that by 2030, Asia will be home to two-thirds of the global middle-class population, and in less than five years, India will overtake the United States to become the second-largest middle-class market in the world.

Harmonized regional trade policies, a strategy for increasing exports, and improved physical infrastructure to connect Nepal with its neighbors could help Nepal reap the benefits of South Asia’s rapid economic growth.  Increased trade would help Nepali producers and exporters reap the benefits of South Asia’s economic growth. Currently, imports to Nepal have been skyrocketing, exports have been stagnant.

If Nepal increases exports to the 400 million people that live in Indian states bordering the Tarai, the economic impact would be tremendous.  Nepali farmers should be able to take advantage of this enormous market, and might reach their potential if the Government of Nepal changes existing policies to allow foreign investment in this sector.  This would result in more modern equipment and techniques, increased value addition through processing, and ultimately more and higher value exports from Nepal.  Better land-use policies, including an updated Land Act that emphasizes productivity would also benefit the agricultural sector, ultimately leading to more exports.

One of Nepal’s biggest assets is its industrious and youthful human capital—a workforce increasingly well-educated and globally connected.  While Nepal has benefited from remittances, an economy that depends on the mass export of a society’s young workforce is not sustainable.  Fortunately, a growing network of entrepreneurs is creating new businesses focused around the digital sector and creative industries.  The government can help foster these growing industries by reducing the number of steps needed to open a business or making it easier for aspiring entrepreneurs to access capital.  Additionally, these creative industries would benefit from stronger laws to protect their intellectual property and straightforward policies that encourage e-commerce in Nepal.

Nepal has a clear and straightforward path to greater prosperity, but achieving its full potential requires deeper connectivity with the dynamic South Asian economy.  The government must fully execute Nepal’s budget, and implement legislative reforms that will improve the business enabling environment.  Free and fair enterprise competition—currently absent due to syndicates and cartels—must be fostered.  These are some policy steps that the new government has spoken in favor of which can increase economic growth.  The public has voted for, and expects, action.

The United States will continue to work with Nepal to meet its development goals and help it transform into a middle-income country.  We want to evolve our relationship with Nepal from one focused around foreign assistance to a partnership between two prosperous countries that is conducive to investment, trade, and a better economic future for both countries’ citizens.  Nepal has all the ingredients it needs to become a prosperous country.  The government has said that it welcomes investment and will make economic development its top priority.  Now is the time for the government to match these words with bold action.

The author is US Ambassador to Nepal