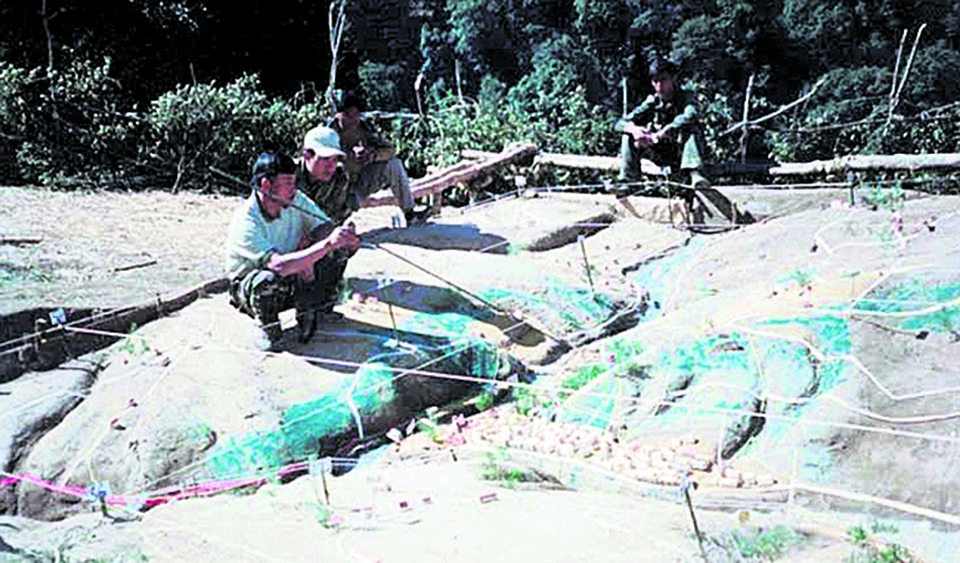 MYAGDI, March 22: Fourteen years ago, Beni witnessed a devastating offensive launched by the then rebel Maoist rebels during the decade-long armed insurgency. On the night of March 20, 2004, the rebels infiltrated the town, the district headquarters of Myagdi, and launched a deadly attack on security personnel from all sides.

To this day, some locals still vividly remember the sound of blasts and gunfire as if it happened just yesterday. Some of the witnesses recall locking themselves up in their house, holding on to their children, and praying for their lives as crossfire between security forces and the rebels continued through the night.

When the dust settled the next morning, the devastations were horrifying - bloods splattered everywhere and piles of dead bodies. It was like a scene from a action war movie, except it was very real.

By the time the Nepal Army took back control of the town, the causalities were reported to be at 140, which included 19 civilians, 14 Nepal Army personnel, 17 police and 90 rebels.

The scene of the deadly battle and its aftermath is etched in the memory of the town's residents. Those who remember the fateful night still get gloomy feeling, evoking bitter memories of pain and losses. Although 14 years have passed, for them, the wounds from Beni attack still bleed fresh.

Family of Jhilke Sarki of Beni Municipality-6, who was killed during the battle by bullets fired by security forces, is one among the many households affected from the battle. After a dreadful night, Sarki had left his house to perform menial labor work for survival in morning. But while on his way he was shot Nepal Army personnel from their helicopter mistaking him for a rebel, whom they were chasing. He had died on the spot.

Sarki's wife remarried following his death. The children from the first husband, Kalpana and Bishal, have been living a very difficult life since then. The children were forced into menial labor since a very early age.

The stories of family of the deceased Thakane Damai, Sunte Damai and Fauje Damai and Khanbe Damai of Pulachowr Purenne are no different. They too were killed with Sarki while performing daily wage labor. The families of the victims depend on menial labor works that barely fetch enough money to buy two times meal a day. Needleless to say, the fateful night had forever changed their lives for worse.

Although the government has provided relief to the victims' family, little initiatives, if any, have been taken to provide for their basic needs including education and health facilities. For this reason, families of the deceased have expressed severe dissatisfaction.

“The Maoist assault killed many innocents. Many families lost their breadwinner. However, the government has shown no interest to ease our daily struggles,” said Tikaram Darji of Pulachaur. “Although the CPN (Maoist Center) has reached the government multiple times after the peace process, they have not bothered to do anything for the family of those who lost their lives in their war,” he added.

He further added that the victims have much hope from the current government led by the CPN-UML and the Maoist Center.

Although the government has provided relief to the victims' family, little initiatives, if any, have been taken to provide for their basic needs including education and health facilities.

The victims said they cannot express the pain of losing their beloved family members and sole breadwinners in the attack 14 years ago. Organizing various programs, they have been criticizing the government for treating them as second-class citizen. Time and again, they have been demanding that they should be accorded priority status for employment in government and non-government organizations, along with availing providing better education opportunities to their children.

According to District Administration Office, Myagdi, they have provided Rs 500,000 to the family of the deceased labors who were killed by Nepal Army, mistaking them for being Maoist rebels. Furthermore, the office said they are prioritizing to provide skill-based training to help their family in making decent living.

According to Bigyan Subedi, district representative of Local Peace Committee, lack of budget has deeply affected the relief and compensation package among other schemes to the family of the deceased.

“At the moment, there is no program aimed at the welfare of those families,” he informed. “Although a long time has passed, there is still urgent need to reach the settlements and tend to the wounds of the victims,” he added.

Pushpa Kamal Dahal aka Prachanda, chairman of the Maoist Center and the leader of the rebellion, has already led the government three times. Despite becoming the country's Prime Minister thrice, many have accused him of neglecting the need to provide compensation and facilities to families of those who lost their lives during the insurgency. Even cadres of his own party have expressed dissatisfaction for the same reason.

“We have been pressing to provide relevant relief package and opportunities to families of the victims who lost their life in the rebellion,” said Govinda Paudel, district coordinator of CPN Maoist Center. “Now we will also demand the current left government to make appropriate budget available for such activities,” he said.

Such pledges have been repeatedly limited to words only. Nonetheless, the victims continue to pin their hopes.

ISTANBUL, Jan 2: The Islamic State group on Monday claimed responsibility for the New Year's attack at a popular Istanbul nightclub that... Read More...

BAGHDAD, July 8: The death toll from an attack on a Shiite shrine north of Baghdad has risen to 37 overnight,... Read More...