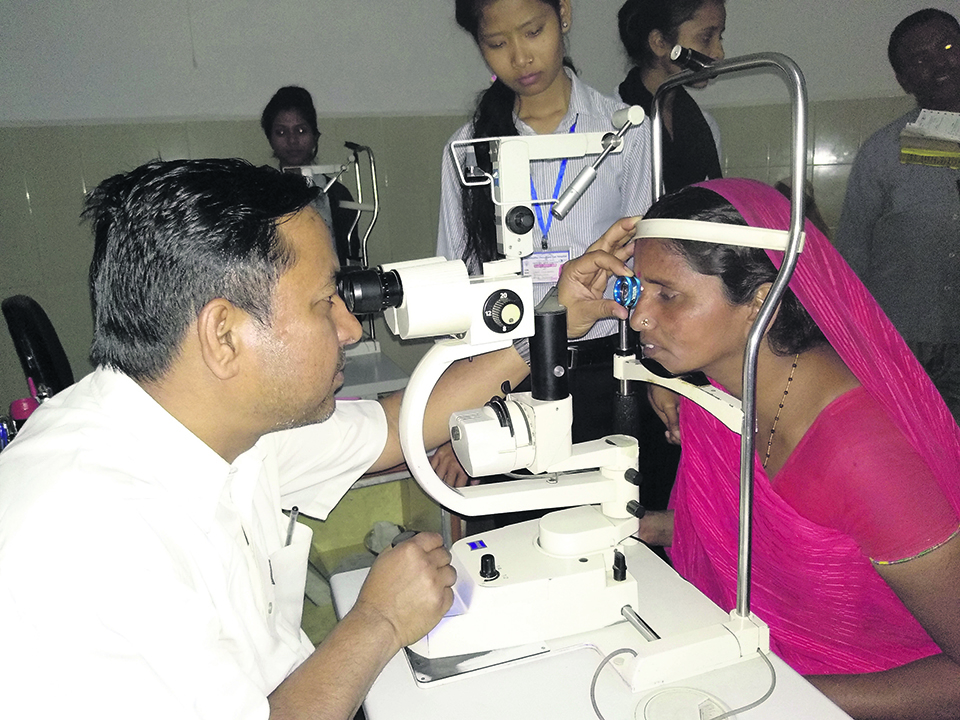 LAHAN, March 19: After his left eye started seeing blur vision, Suman Devi Thakur, 48, a local of Bihar State in India, visited Sagarmatha Chaudhary Eye Hospital in Lahan of Siraha district seeking treatment. That was back in 2010. At that time, the doctors had diagnosed it as glaucoma and initiated treatment accordingly. He was asked to come for follow-up visit after three months.

The medication improved his vision. However, he did not go for follow-up treatment as asked by the doctors. Eventually, this negligence started weakening his vision. He visited the hospital for treatment after a long gap of seven years, but by then it was too late.

“Doctors tried everything they could but to no avail. They said they cannot bring back my sight as I delayed too much to seek treatment,” said Thakur, after consulting a doctor at the same hospital on Friday.

Thakur is was full of regrets. “Had I came for follow-up treatment after three months of my first visit, my left eye's vision would have remained intact. My negligence cost me a lot,” he said.

According to Dr Lila Raj Puri, Medical Superintendent of Sagarmatha Chaudhary Eye Hospital, glaucoma can be hereditary as well. “If one member of a family gets glaucoma, it could mean the other members also may have it. Genetics play a big role,” he said.

According to the 2010 survey, there were 20 million people worldwide with glaucoma. The report estimated that the number of glaucoma patients could reach 80 million by 2020. By that year, the WHO estimates that 10.1 million people could lose their sight due to the disease.

We can get glaucoma from eye injury, hereditary, aging, problem in blood circulation, imbalance sugar as well as blood pressure among other many causes. - Dr Lila Raj Puri,  Sagarmatha Chaudhary Eye Hospital

According to a study published in 2010, glaucoma is one of the leading causes of blindness in Nepal. According to the report, 3.2 percent of the country's population had glaucoma in 1981. The report states that the number reached to 5.9 percent in 2012.

“People can receive all sorts of treatment on glaucoma in the country itself. However, people identify glaucoma very late, increasing the risk of going blind,” said Medical Superintendent Dr Puri. “In order to decrease such risk, everyone should periodically visit hospitals for check-up from time to time,” he added.

According to doctors, Glaucoma is a group of related eye disorders that cause severe damage to the optic nerve of eyes. When optic nerve, which carries information from the eye to the brain, sustains damage, eye vision gets blurred. This eventually leaves the person blind.

“It is very difficult to diagnose glaucoma as it usually does not have any symptom. As victims usually don't feel pain and any other symptom, the disease can be very dangerous,” said Dr Puri. “By the time people notice problem in the sight, the diseases could progress to the point that many a times it would prove too late to restore the eyesight.”

Due to difficulty to identify the disease in early stage, glaucoma is also known as 'silent thief', he added. Doctors warned that people of any age, from children to elderly, could be having glaucoma without being aware of it.

“We can get glaucoma from eye injury, hereditary, aging, problem in blood circulation, imbalance sugar as well as blood pressure among other many causes,” he said. “Likewise, use of medicines in the eyes that are categorized in steroid groups could also increase the risk of glaucoma,” added Dr Puri.

As glaucoma develops in later stages, victims lose side vision. They would be able to see only straight. Eventually, this result in blindness, doctors warned.

“Normally, our eye pressure ranges from10 to 21 millimeters of mercury (mm HG). If the pressure increases beyond that point, there are higher chances of causing damage to eyesight,” said Dr Puri.

Eyesight damaged by glaucoma cannot be restored. However, timely diagnosis and treatment of glaucoma could prevent additional damages in eyesight, preventing persons from going blind, according to doctors.

“The main treatment of glaucoma is to maintain the eye pressure and prevent further damages on eye's optic nerves,” said Dr Puri.

According to him, there are three possible treatments. The first method is through medication and another way is through laser treatment. And the last resort is through surgery.

Doctors said there is a huge need to raise awareness about glaucoma as thousands of people could be silently suffering from it without knowing. Until and unless awareness about the condition is spread, doctors said it would be very difficult to eradicate blindness.

KATHMANDU, March 31: Pressure to purchase a specific radiotherapy machine for Bir Hospital, the oldest and biggest hospital in the... Read More...