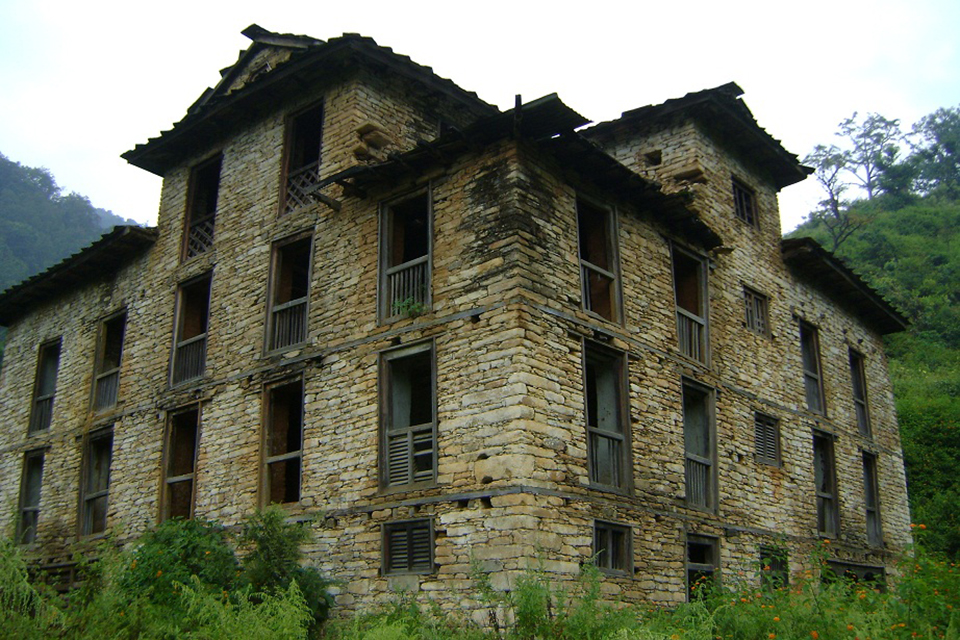 Bimkot based palace belonging to the king of Bimkot, a descendant of one of the erstwhile Baise Chaubise kings, in Achham. The family abandoned the house and fled for safety during the Maoist insurgency. Khamma Khatri/Republica

ACHHAM, Mar 12: Migration from villages and towns of Achham for the last few decades has left many of the settlements deserted. Even palaces, which were considered posh back then, now are in ruins.

“Well-to-do families were the first to move away to cities,” states Dhan Bahadur Shah, vice chairperson of Mellekh Rural Municipality. “Their houses are now in ruins,” he added.

He shared that locals of Achham started migrating to other places right after the end of the Rana regime. The migration was triggered by political and social changes in the country he claims and categorizes the migrants in two broad categories.

“The high-class people who used to live in good houses with all kinds of facilities choose the capital city as their future destination. They had capacity to settle down instantly in the new place. And there are the poor class of people for whom migration was more a compulsion than a choice,” Shah explained.

Only a handful of people are left in villages. Considering the trend, one day they too will go away from here and our villages will have only deserted houses. - Sher Bahadur Shah, a resident of Payal VDC-3

The poor families, according to Shah, landed in the Tarai districts as, unlike in Acchham, they could get earn a living from farming in the plains.

“In the hills, you cannot grow all types of crops. Even though you work very hard, your toils are hardly reciprocated by the yield. But in the Tarai, even if you don't own your own land, you could work in others' fields or take fields in lease and start farming. Because of these factors, people have been gradually migrating away from here,” he stated.

Due to the consistent migration to other places, population in many villages and towns continues to decline. For instance, there were 65 households in ward number three of Payal VDC during the census of 2011. Now, there are no more than 20 families in the village.
According to Sher Bahadur Shah, local of the village, it is not only his village which is losing human population to the migration but similar trend is evident in Siddheshwor, Chandika, Bahidyanath, Shodasha, Kalika, Timilsen, Darna, Oligaun, Basti, Kuika and Bhairabsathn villages.
“Only a handful of people are left in villages. Considering the trend, one day they too will go away from here and our villages will have only deserted houses,” he noted.

Those who are 'delaying' to migrate either are poor or have some family situation that restricts them from migrating. Affluent families and families, who have no means of earning livelihood here, have found it better to set off.

Even though these migrants have settled in several parts of the country, most of them have settled in Kailali. It is estimated that Tikapur and other eastern zone of Kailai alone have received around 60 percent of the Achhami population. In Tikapur most of the population are migrants from Accham and owing to this fact the town is also termed as 'mini Achham'.

Most of the migrants settled in Kailali are the poor people. Some of them claim that they would not have left their ancestral place if the 'leaders from their own place had worked towards developing Achham.

Shah claims that the migration trend could have been slowed down if political party leaders had addressed the concerns of the population in time. “Even if it could not be fully stopped, it could have been surely slowed down. Many would have opted to stay instead of migrating to Kailali or other parts,” he said, adding that many of his relatives have become Tikapur locals for a long time now. “They migrated from here and they are doing well there. But, they would have done well here as well if we all had been able to focus on developing our locality here,” he added.

Shah pointed two reasons for Kailali to be the choice of most of the migrants. One of the major factors is the availability of fertile lands in the district. Second, he pointed out was that people mostly migrate in groups rather than single. “When the process begun, early migrants settled in Kailali, Later on, others simply followed the suite. Therefore a huge chunk of Achham's population settled in Kailali,” he noted.

Mahendra Khadayat, president of FNNCCI, Accham, stated the lack of remittance in the district has left it very poor in terms of human development index. He claimed economic and social backwardness has persisted in the district in lack of integrated efforts from the stakeholders and the public.
“It is not that the people from here have not reached to high levels. But they are not putting in their skills and investment for developing this place,” Khadayat said.

He lamented that despite holding important posts in politics, bureaucracy, industries and other sectors, former and present residents of Achham have not done as much as they could for developing the district. “They are slowly forgetting this land,” he said.

PARBAT, March 3: There was a time when the locals of all 55 VDCs of Parbat had to reach the district... Read More...

Let's not overshadow the issues that Prem Archaya tried to raise: Dr Toshima Karki
2 minutes ago