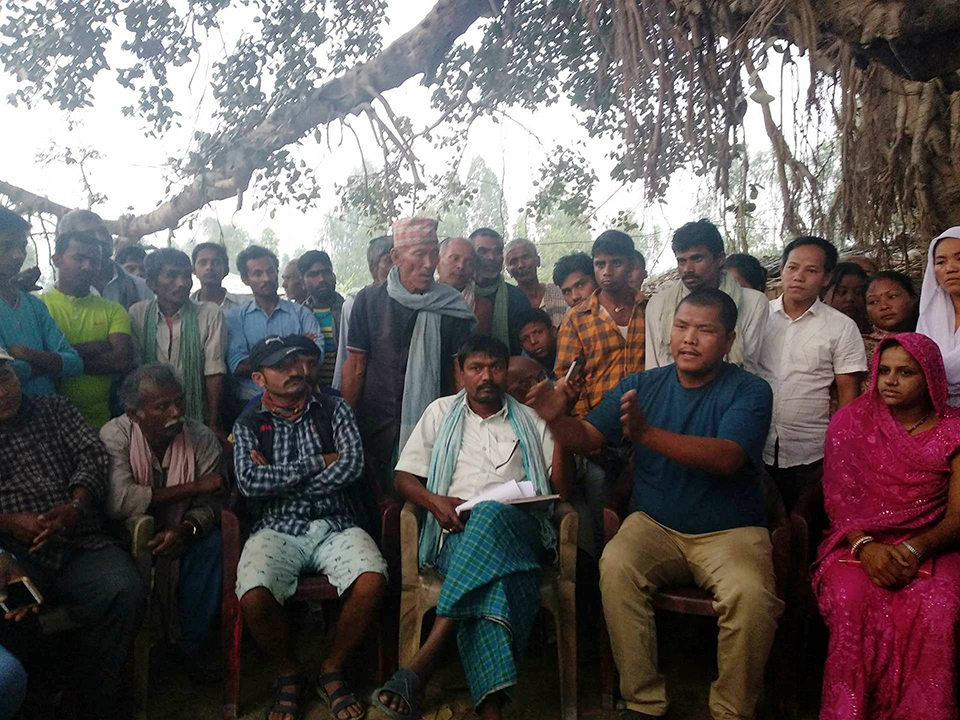 Squatters holding discussions after government decides to provide the public land they were using for a long time to the army. Republica

MAHOTTARI, Mar 12: Squatters of Mahottari have warned of taking to the streets if the government provided 61 bighas of unregistered land in Bardibas Municipality for the construction of the middle-east headquarters of Nepal Army in Province 2. As the squatters have long been using the land for growing crops and vegetables, they have accused the government of trying to snatch their source of living.

On Saturday, the squatters and their representatives gathered at Pashupatinagar of Bardibas Municipality-9 and formed a 25 member committee. Keshav Pokharel, the coordinator of the committee, stated that the government has irked the squatters by handing over the land to the army without thinking about their future.

On February 11, the squatters submitted a written statement to Bardibas Municipality and Service Center Bardibas urging them to solve this issue. Later on February 17, they submitted a letter to the chairperson of the CPN (Maoist Center) Pushpa Kamal Dahal in order to draw his attention towards the issue. However, nothing has happened yet. "Now, we will take to the streets and stage peaceful protests," said coordinator Pokharel, adding, "Picketing the municipality and service center, general strike, pen down, relay sit-in and fast-unto-death will  be among our protest programs."

According to Pokharel, the committee will make efforts to resolve the problems of squatters in a couple of days.  They have demanded that the government offer compensation to the squatters by understanding their problem.

The chiefs of wards 7, 8, 9 and 13 of Bardibas have agreed to co-operate with the squatters in their protest. Falgun Sushiling, ward chief of Bardibas Municipality-7expressed disappointment over the government for not informing the representatives before handing over the land to the army. For many squatters, this land was the only source of earning.

In 1997, the Squatters Commission had offered nine bigha land to 15 farmers along with land ownership certificates. But they accuse the government of handing over that land to the army without giving any compensation to the victims.

On January 4, the government announced to create divisional offices of Nepal Army in all the seven provinces. After that, the District Land Revenue Office, Mahottari, handed over the land certificate of 287 bigha,12 kattha and 17 and half dhur land to the army for the construction of the provincial army headquarters.

Why a deadline for sexual assault victims to get justice?
47 minutes ago

Why a deadline for sexual assault victims to get justice?
47 minutes ago