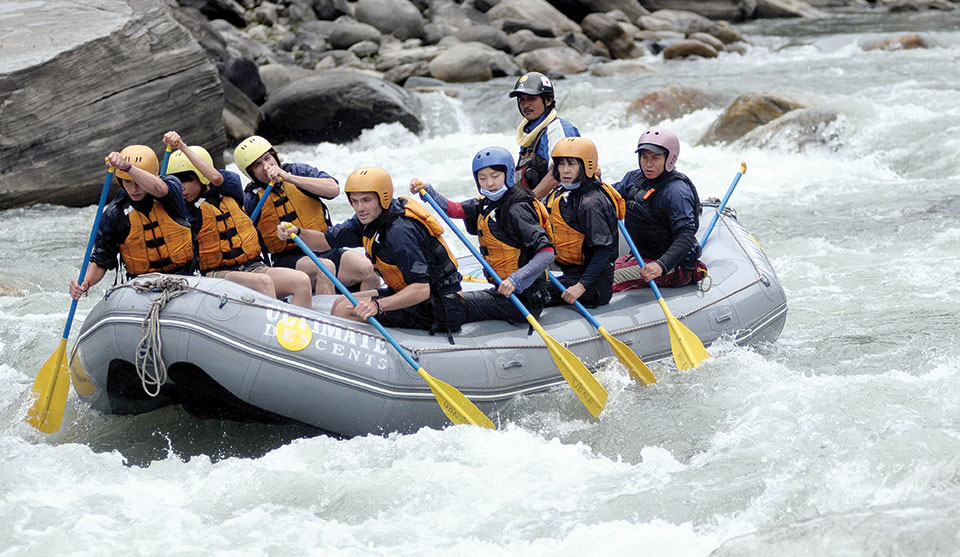 KATHMANDU, March 10: White water rafting, an adventurous tourist activity with high business potentials in Nepal, is threatened by the government’s failure to separate hydroelectricity projects from rafting sites in rivers allowed for rafting.

Thapa further said that irresponsible decisions of the government and growing water pollution have caused the number of tourists to go down.

“We are not against development projects such as hydropower, indeed it would be a big achievement for the country to make a progress on such projects. But the government should also consider tourism based on water activities,” Thapa added.

Not only the number of foreign tourists arriving Nepal to raft has been going down, long trips to river sites has also being affected in recent years.

Foreign tourist used to come to Nepal for up to 12-day-long trip to Karnali, Sunkoshi and other rivers where they used to enjoy different water activities, according to Thapa.

“In the last few years, long trips for water-based activities have been completely stopped,” Thapa added.

Currently, the government has allowed white water rafting in 16 rivers of Nepal.

“We are not against of hydropower projects, but the government should not ignore the significant role of water-based tourism as well,” said Chandra Bahadur Dahal, immediate past president of NARA. “We have asked the government to allocate certain areas in the rivers for rafting.”

On the one hand, the government is yet to allow NARA to keep records of the tourists coming for rafting. “We are just receiving assurance from the government but they are yet to manage a proper policies and regulations for the water tourism industry,” he added.

Dahal however expressed his hope toward the local government that they might play any positive role to preserve and promote water tourism. Unstable government posting of secretary for tourism ministry in every six months has troubled the industry.

Not only the pollution and hydropower projects but the lack of promotion is also affecting the rafting industry.

Nepal has more than 6000 rivers and most of them are all Season Rivers which are suitable for rafting.

Currently the rafting industry is surviving because of the domestic tourists only. “Indeed the attraction of domestic tourists toward rafting has saved us but we need to increase the number of foreign tourists as well,” Thapa told Republica.

KATHMANDU, Nov 15: Federation of Contractors Association of Nepal has demanded that the government immediately arrest the mastermind of the... Read More...

KATHMANDU, Nov 15: Federation of Contractors Association of Nepal has demanded that the government immediately arrest the mastermind of the... Read More...