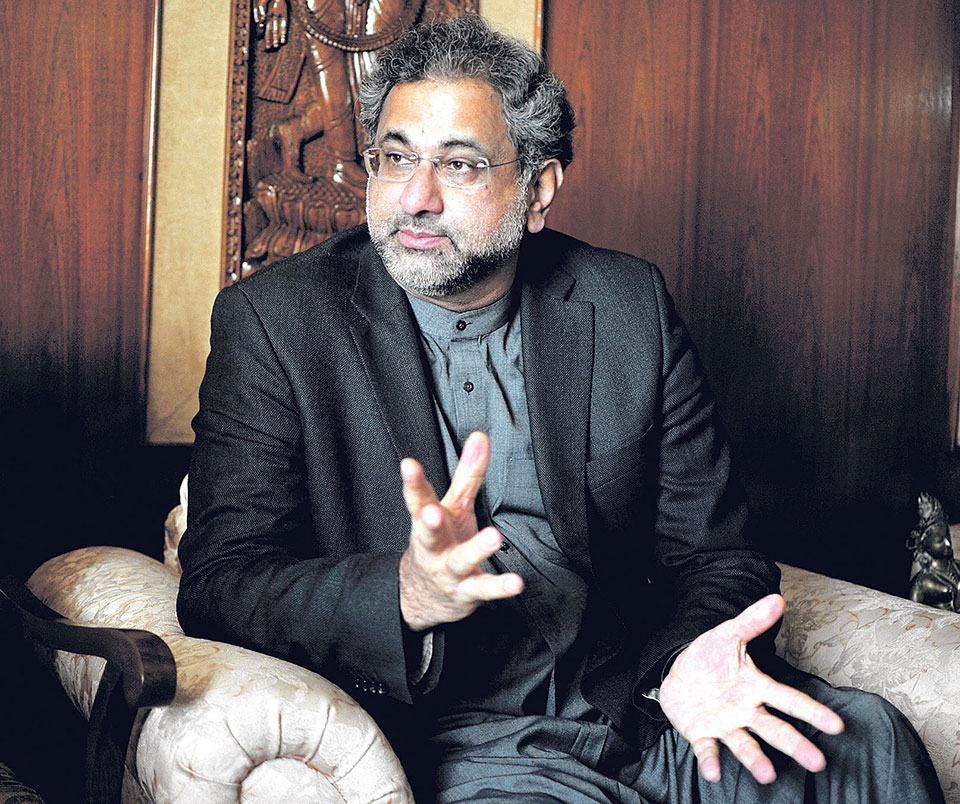 Shahid Khaqan Abbasi, Prime Minister of Pakistan, was on a two-day state visit to Nepal. He visited Nepal at a time when regional diplomatic activities are once again on the rise. Republica’s Subhash Ghimire and Nagarik’s Guna Raj Luitel talked to the prime minister on bilateral trade, revitalizing SAARC and the ongoing India-Pakistan issues in Kathmandu before his departure to Pakistan on Tuesday.

Why was the visit so sudden? Should we take this visit as the next level of engagement between Nepal and Pakistan?

It was a good opportunity to be here. The new prime minister has taken over and the political process has been completed. From the interaction here and even before coming here, I am very optimistic about the political stability in Nepal. I think the constitutional democracy has taken hold. Things will move forward now. Without political stability, you would not get prosperity.

We have been through the same process. After 70 years, this is the second parliament which has completed its term: first one was from 2008 to 2013 and now till 2018. So continuity is important. Stability is important. It gives confidence to investors. I think Nepal is now ready to move into different phase of development.

What will be the next level of engagement between Nepal and Pakistan?

The bottom line is that we have to improve trade and improve people-to-people connection. The government can facilitate trade opportunities, if we can identify and capitalize on them, between the private sectors of two countries. People-to-people contact means more tourism. Pakistan has very important Buddhist sites and they are very well preserved. Those could be important pilgrimage sites to Nepali Buddhists.

We were discussing at the meeting the other day that there are 14 mountains taller than 8,000 in the world. Eight are in Nepal and five are in Pakistan. We have monopoly on mountains. We can learn from each other and have joint tourism activities. This is very unique part of the world.

I think cooperation in the past had different meaning. Today, it’s trade. We have to look at opportunities everywhere. Nepal is a large importing country, and I think it needs to increase its exports to create the balance. Similarly, Pakistan also has trade imbalance but not as bad as Nepal’s. We have export of around $25 billion and import almost double of that. We have to look for market and see how complementarity can be achieved. We have tasked ministries and also the investors to look for opportunities to remove that disparity and increase trade.

Pakistan International Airlines (PIA) used to have direct flight to Kathmandu. It is no longer the case. Has your government thought of reconnecting Kathmandu and Islamabad?

PIA has its own issues. You have to remember that in those days there were no gulf airlines. Now, Qatar, Emirates, Oman and others have taken away the market. I think with SARRC and visa reforms, market can be created. I was head of PIA for three years from 1997. We used to take Nepalis to the Middle East. Airlines from the Gulf have daily flights and they are doing well. We can definitely look at the market. Private sector can also look at the market. It can be developed. There is a possibility there.

Karachi is two hours from Islamabad. We came to Kathmandu from Islamabad in one hour and forty minutes. The two cities are much closer than our own cities.

Pakistan and China have been working closely on a number of big infrastructure projects, especially on Belt and Road Initiative (BRI). Both Nepal and Pakistan are now part of BRI. What are some of the lessons that Nepal should learn from Pakistan’s engagement with China?

This is what I shared with PM Oli, Finance Minister and the team during our bilateral meetings, and also with the president. It’s all about connectivity. BRI is basically China’s push toward the West, and all the regional countries can connect into that. The opportunities are there and we just have to capitalize on that. For example, the visible part of BRI today is China-Pakistan Economic Corridor (CPEC). It basically is efficient access to the sea for all of the Central Asian countries and to Western China. That is the crux of the matter. With that connectivity comes investments in power plants, highways, motorways, ports, airports, rail network etc.

I think Nepal can learn a lot from our experience. Better connectivity will mean much greater independence and much greater potential for growth.

From Pakistani perspective how should we understand the new resurgent China?

I think Chinese President Xi Jinping has provided a great opportunity. I was at Davos in Switzerland and everybody was talking about BRI. This is a project of a generation, a paradigm shift. The whole region needs to connect into BRI which will then open markets and opportunities for us in the West and in Central Asia. There is a great potential here.

Technology today provides a lot of solutions that were not there before. Where we thought highways could not be built, we have built there. Where rail could not be built in certain area, it has been built. Our connectivity to China is through 1,500 km foot pass. It is now open all the year round and trade is booming. Nepal also has that potential.

What are some of the impressions of Nepal that you are taking back to Pakistan?

I came to Nepal twice before as a private citizen. This is my first official visit. I first came in 2008, and the city has grown. I see economic growth. The people are content, happy with the situation. There is optimism with the new government in place. Back in 2008, state of things was in flux. Now there is confidence in the leadership. If 80 percent of the people come out to vote, it’s a phenomenal number and that too three times in six months! Democracy is a basic building block. Once you have that, everything else will come. From what I saw here, I am very positive and optimistic about Nepal’s path forward.

We have two giant countries in the region: India and China. How should countries like Nepal and Pakistan deal with these powers?

Everything brings opportunities and potentials. We need to harness the potential. We need to work to improve trade and connectivity, and improve the prosperity of the people. That’s all that matters. We have bilateral issues and those can be resolved as time goes along. We have seen all over the world that very difficult bilateral issues get resolved. However, that does not mean we ignore regional issues. That is why we put a lot of importance in SAARC and continuing its processes.

One of your purposes of the visit was to facilitate the next SAARC Summit in Pakistan. Has there been progress? Will Pakistan host the next Summit?

We have been willing to host the Summit since 2014 and it was supposed to happen in 2016. It has not happened, but we hope that consensus will be there to have the SAARC Summit. Other ministerial meetings are happening but Summit is critical in every few years so it can provide direction to the forum.

SAARC is an important forum for the countries in this region. We have a shared history, culture and it is very important that this forum is activated and made useful.

Cricket is popular in both the countries. Nepali team is doing well. There could be engagement between the two teams.

Absolutely! Nepal has a large population. Thirty million people is not a small country. You will be amazed how popular cricket is in Pakistan. I come from a mountainous area, just like Nepal. Everywhere you go, children are playing cricket. There is a huge fascination for cricket. We hope to see Nepal on the limelight soon.

A lot of people see Nepal as a neutral venue for sports and even for diplomatic exchanges. Could Nepal mediate talks between India and Pakistan?

Yes. The SAARC forum is available here. The third forum always helps whatever confidence building measures or whatever other issues you want to deal with. Nepal has a unique sense of history as well and that can help facilitate those initiatives.

    Constitutional democracy has taken hold in Nepal. Things will move forward now. Without political stability, you would not get prosperity.

    Pakistan has very important Buddhist sites and they are very well preserved. Those could be important pilgrimage sites to Nepali Buddhists.

    Karachi is two hours from Islamabad. We came to Kathmandu from Islamabad in one hour and forty minutes. The two cities are much closer than our own cities.

     Nepal can learn a lot from our experience. Better connectivity will mean much greater independence and much greater potential for growth.

     The whole region needs to connect into BRI which will then open markets and opportunities for us in the West and in Central Asia.

'Nepal could facilitate talks between India and Pakistan'