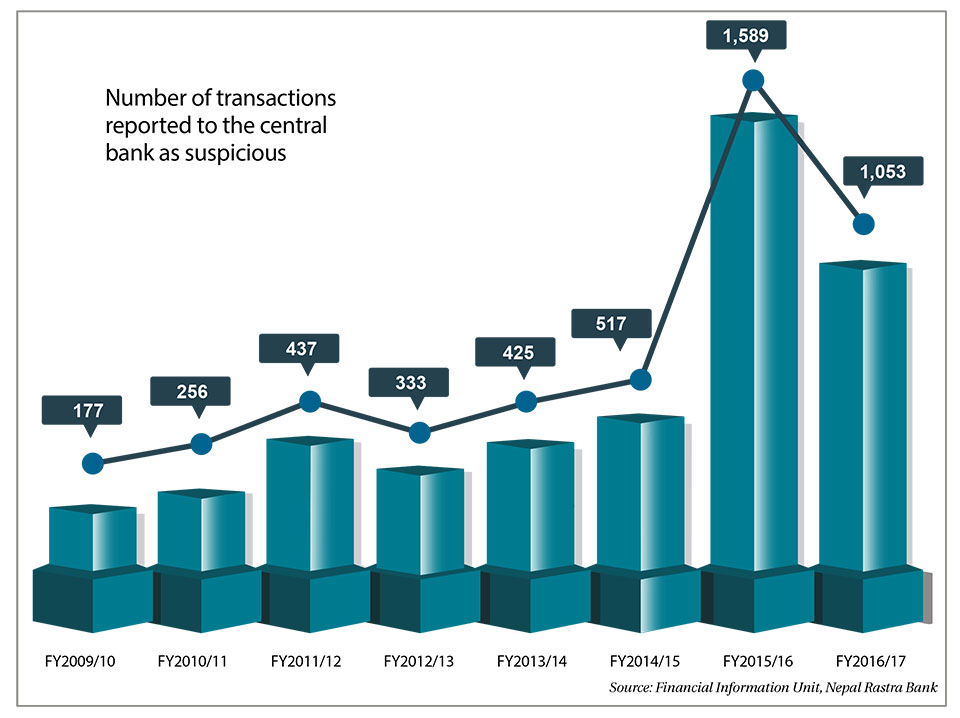 KATHMANDU, Feb 28: The number of suspicious transaction reporting (STR) by financial and other reporting institutions has declined significantly in the last fiscal year -- FY2016/17.

STRs are detailed information about transactions that are or appear to be suspicious, helping the FIU to identify individuals, groups and organizations involved in fraud, terrorist financing, money laundering and other crimes.

All  BFIs,  money-changers and remitters, cooperatives, insurance companies, and securities  business persons and  designated non-financial business and professions like dealers  of  precious  stones  and  metals,  casinos,  independent  accountants  and  legal professional,  notary public, trust and company service providers,  designated government agencies such as the Office of the Company Registrar, Land Revenue Offices and Department of Customs, among others, are legally obliged to report suspicious transactions to the FIU.

FIU requires reporting of all actual or attempted transactions, if the reporting entity has reasonable grounds  to  suspect that the  money/asset  is  generated  from  or  related  to  money laundering, terrorist financing, or other  offences  and illegal activities. It may also include the transactions that are large, complex, unusual, legally or economically impossible, or discordant.

According to the report of the FIU, the top reporting sector for FY2016/17 remained banking sector. The criminality  most commonly  reported  in  STRs  during  FY2016/17  was tax  evasion,  followed by misuse of payment  products.

FIU has attributed the decline in the number of STRs to the fact that the reporting entities have learned to scrutinize and submit only genuinely suspicious activities.

“The numbers of STRs appear to decrease this year. This is mainly due to the submission of quality STRs from the reporting entities,” added the report.

According to the FIU, an STR converted into intelligence by adding value is disseminated to respective investigating agencies as per their mandate and nature of the case.