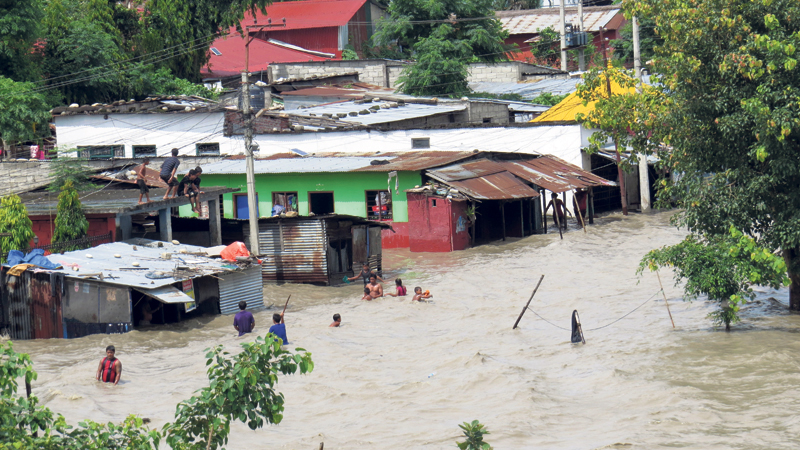 Men, women and children at a squatter settlement in Gaidakot, Nawalparasi wade through floodwaters from the Narayani River that inundated their homes Tuesday. The water level in the river reached 10.24 meters in the evening. (Ramesh Kumar Paudel/Republic

KATHMANDU, July 27: Floods and landslides have swept across various parts of the country, leaving at least 37 people dead in the last 24 hours. Twenty-six others have gone missing while more than 2,000 houses are inundated.

Landslides and floods triggered by incessant rainfall have left 15 dead in Pyuthan district, seven in Gulmi, four in Palpa, three in Makwanpur, two in Udaypur, three in Baglung, one in Banke and two in Rupandehi. Hundreds of families have been displaced in various parts of the country.

Monsoon-triggered floods and landslides in Pyuthan claimed at least 15 lives. And at least 23 others in the district have gone missing. Over 200 households are at high risk of being swept away by flooding and landslide.

Among the deceased, five are from Lung VDC, two from Puja, and two others from Khawang. Shova Rijal and Kali Pariyar of Lung-6 were buried in landslide. Prem Thapa, 11, Ranjana KC, 40, and Sushila KC, 12, of Bahane Bajar were buried by landslide and later pronounced dead.

Similarly, Supari Malla and Mukesh Malla of Rajwara were buried by mud while sleeping at home. Two more have been buried under mud in Khawang. Their identities are yet to be ascertained. One person from the same area has gone missing.

Meanwhile, more than 200 families have been displaced due to fear of landslides in various parts of Pyuthan. The affected families have not slept since Monday night due to landslide fears.

Four persons, including three members of one family, died when their house collapsed due to landslide triggered by incessant downpour in Palpa district, Tuesday.

According to District Police Office (DPO) Palpa, 45-year-old Tam Bahadur Kanauje, his wife Khagisara and  daughter Yashoda Kanauje died in Gothadi VDC-5.
The bodies of the victims, who were buried by landslide while they were asleep at house on Monday night, were retrieved only on Tuesday morning.

Rekha Bhusal/Republica
[The Tinaun River swept away a suspension bridge that linked Devinagar and Buddhanagar in Rupandehi district Tuesday afternoon.]

Similarly, a girl has been buried to death after her house was buried by landslide in Dobhan VDC-1 along the Siddharth Highway, Tuesday morning.

The deceased has been identified as 15-year-old Ashmita BK, a ninth grader at Tilottama Higher Secondary School. Other members of her family managed to escape, informed Kulchandra Puri, a local.

“The landslide started from about 100 meters above. It has completely blocked the highway, bringing traffic to a grinding halt,” said Praveen Acharya, chief of the District Traffic Police Office, adding that dozers have been deployed to clear the obstructions.
Chief District Officer (CDO) Baburam Gautam has urged locals to remain on high alert as the rainfall has not stopped and there are chances of a rise in river levels.

The District Disaster Relief Committee (DDRC) and the district chapter of the Red Cross informed that they have already started distributing relief to the victims.

Likewise, three members of the same family died when landslide buried their house at Sola Bhanjyang of Bhimfedi-5 in Makwanpur district, Monday night. The deceased have been identified as Tek Bahadur Rumba Lama, 25, his wife Parbati, 23, and their five-year-old son Bikash, according to Inspector Basudev Thapa of Area Police Office (APO), Bhimphedi.

Amar Khadka/Republica
[The swollen Saptakoshi River as seen from the Saptakoshi Dam in Sunsari district on Tuesday. The flow in the river reached 285,000 cusec (cubic foot per second), the highest so far this year, on Tuesday afternoon.]

A rescue team of 10 led by Thapa had reached the incident site at 5 am upon receiving information about the incident. Nepal Army personnel and locals also joined the rescue effort. Together they evacuated and rescued four households at high risk, according to Thapa.

Similarly, seven persons died in Gulmi district after landslide buried their homes.
The deceased have been identified as Kalika Darji, 62, Tulasa Darji, 49, and Asmita Darji, 19, of Hastichaur-1; and  eight-year-old Suman and six-year-old Simana, the children of Gopal Rana of Bishukharka-9, according to Inspector Bhola Rawal of DPO, Gulmi.

Likewise, Bishnu Prasad Ghimire, 36; and Asha Gharti, 13, of Hwangdi-3 in the same district were killed when their houses collapsed. Bishnu Saru, 70, of Hastichaur, has sustained critical injuries in the incident.

At least three persons have died and two others remain missing in Baglung. Floods and landslides have washed away 26 houses. Property worth millions of rupees has been destroyed in the district.

According to DPO Baglung, Debi Buda of Darling-7 and his son Sandeep have gone missing. “There is a real  possibility that the missing are already dead,” said Inspector Chakra Bahadur Singh.

Police have recovered the bodies of two persons who had gone missing since Monday morning after floods swept away various settlements in Udayapur district. The deceased have been identified as Kali Maya Rai, 38, of Rampur Thokshila-2, and 13-year-old Hritu Pradhan of Tapeshwari VDC.

Incessant rainfall since the past few days has badly affected normal life in the district.

A couple -- Chhabilal Gaha, 60, and HukumKali Gaha, 55, -- died after being swept away by the Kanchan River in Saljhandi, Rupandehi, according to DPO Rupandehi.
In Banke district, Akash Khatri, 15, of Kohalpur-2 was swept away and drowned by the flooded Kirannala River.

The approach of controlling floods and landslides is being carried out continuously, however gaps between research, government agencies, and local... Read More...

MUGU, June 12: The fear of being crushed by rocks and inundated by floods often gives sleepless nights to the police... Read More...

Bhaktapur Murder Update: Shrestha killed by own pal
45 minutes ago

Body of 33-year-old found in Balkot
1 hour ago