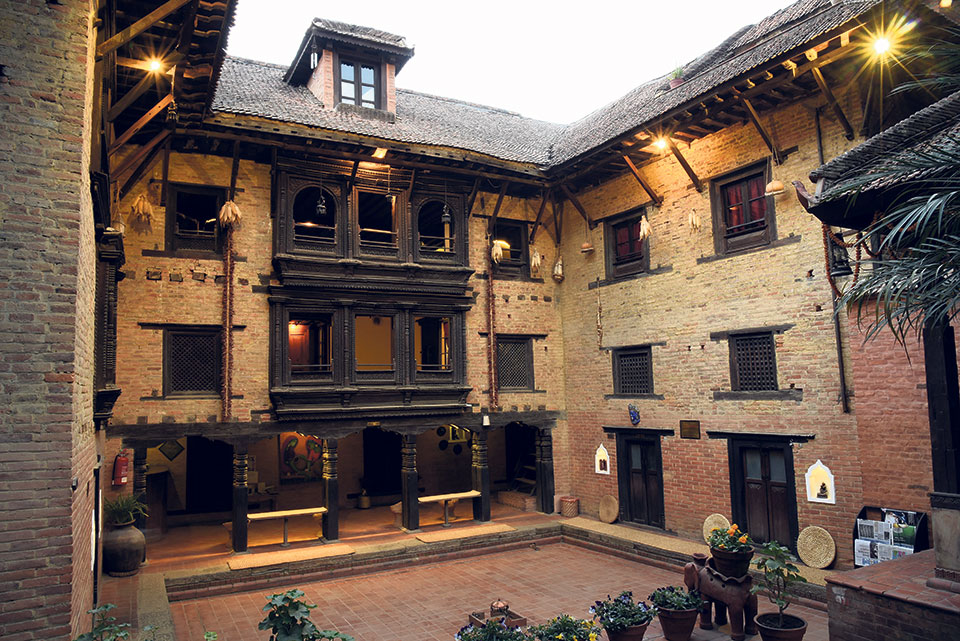 It’s been two years since the massive earthquakes but the architecturally rich Durbar Squares of Kathmandu, Patan, and Bhaktapur are still somewhat in shambles. There have been no concrete steps to preserve important heritage sites that are a part of history. Despite frequent reassurances from the government, there has been nothing but delays in the process of reconstruction. But there are people like Devendra Shrestha who seem to have taken the matter into their own hands.

Looking at his 300-year-old house near Patan Durbar Square, Devendra Shrestha says, “This house reminds me of my ancestry and childhood days. These walls have not only survived the 2015 earthquake but the earthquake of 1934 as well. This building is a living example of our rich heritage and I can do anything to preserve it.” Shrestha has no expectations from the government but he is determined in preserving what he already has: His beloved house and the rich heritage that surrounds it.

Shrestha says he maintains and renovates his house quite frequently, one of the reasons why it survived the magnitude 7.8 earthquake in 2015. “It’s very easy to build new concrete structures but it takes a lot of effort to renovate old buildings. But I feel it’s my duty to preserve my ancestral architecture,” says Shrestha adding that the house not only reminds him of the old, quiet, and clean Kathmandu but is also an oasis in the midst of a crowded city.

His well-preserved traditional Newari house is built of brick and timber in traditional Malla style. Most of the rooms of this house look out to the central courtyard. According to Shrestha, the beauty of his house lies in the meticulous craftsmanship of artisans 300 years ago. He says, “This house also represents the golden era of the Malla dynasty. That was the era of flourishing art and culture in the valley. The house might belongs to my family but it’s the property of all heritage lovers.”

In his quest to preserve and showcase his ancestral heritage, Shrestha converted the house into a traditional Newari accommodation, Newa Chen that operates with the motto, ‘Let’s preserve our heritage’. Shrestha also runs an art gallery to display the richness of our traditional architecture.

While some like Shrestha are preserving old houses to showcase their rich heritage, others are maintaining their homes as a tribute to their ancestry.  “I renovated this 200-year-old house for my parents, Ishwor Man Pradhan and Sanu Chori Pradhan. This is where their forefathers lived and they are very attached to it,” says Naveen Pradhan, owner of Boutique Heritage Home.

Initially, he wanted to preserve the house for his family. However, the process of renovating an old house was financially exhausting. It was much more expensive than he had estimated. “Due to financial reasons, we were forced to convert it into a home stay. This way we were assured of returns on our investment,” says Naveen.

According to Naveen, even his house would have been destroyed by the earthquake had he not renovated it. “The main drawback of traditional houses is that they are very heavy because of mud walls,” says architect Mantee Gorkhali Pradhan, Naveen’s wife, further explaining that to make their house as safe as possible, they removed the heavy mud keeping the basic structure of the house intact like a skeleton. They then had the entire house retrofitted to make it earthquake proof.

Naveen says that if we are unable to keep our heritage intact, we will eventually lose our identity. “Our houses, cultures, and traditions are essential parts of us. I want to preserve this 200-year-old house because this is a part of my identity. But due to lack of artisans and shortage of local materials, it took me more than four years to complete renovation works,” he says.

Lack of local artisans is another problem those looking to renovate old houses usually face. Most local artisans no longer pursue their traditional profession and many have also gone abroad in search of better opportunities. According to Naveen, their skills have been sidelined for many years now, as a result of which our ancient architectural designs and wooden patterns are in the verge of extinction.

“Traditional wood workers are so skilled that just studying Nepali architecture will not give us even half the knowledge that they possess through their ancestry and experience. I’m worried that soon we will have no one to do this kind of woodwork that reflects our heritage,” says architect Pradhan.

But Thapa also mentions that the cause of destruction of traditional architecture is not only the earthquake. Unscientific road expansion projects have also damaged and destroyed many important designs. He says that some beautiful ecologically friendly designs have been destroyed without any assessment or consideration.

“It is almost as if our state cannot fathom or understand the significance of these buildings. But these are our heritage and they need to be taken care of,” says Thapa who claims that he is doing his best to adapt these traditional designs in modern buildings.

The beauty of traditional houses found in Kathmandu, Patan, and Bhaktapur is that they are built with locally available raw materials. Their intricate woodcarvings, low ceiling, brickwork, and low entry doors are what distinguishes them from others. The good thing is that even young students in the valley are finally realizing the importance of these traditional designs.

Subina Shakya, a fourth year architecture student at Tribhuwan University Institute of Engineering, Pulchowk, says, “During my bachelors, I was intrigued by how traditional buildings affected our lives, psychology, and behavior. I was always interested in how architectural designs reflect our society and community. But while studying Nepali architecture, I took these fascinating designs for granted. I underestimated their importance because I would see them everyday.”

Back then she had never imagined that one earthquake would destroy everything. “The careless construction and expansion of roads are making matters even worse. As a citizen and a youth I feel it is my responsibility to protect our heritage which is our pride,” says Shakya, who in the future aims to get herself involved in conservation projects and positively influence government’s public policies, especially those affecting traditional architecture.

Cease-fire between Palestinians, Israel takes effect in Gaza
43 minutes ago