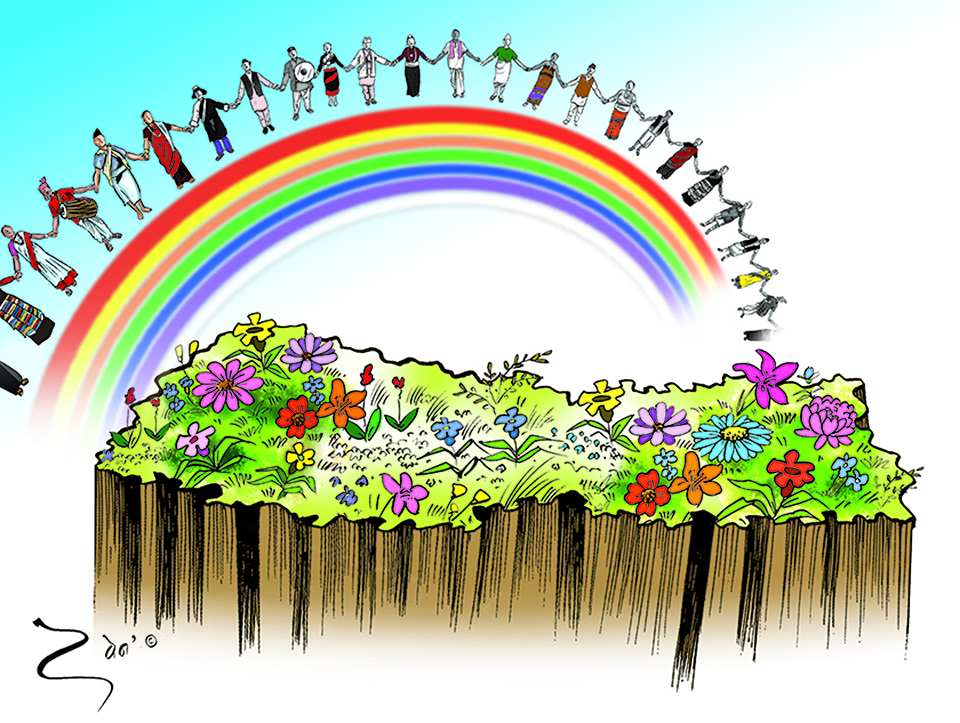 At an oath-taking ceremony, Province 2 set an example of cultural diversity existing in Nepal. The assembly members pronounced their oaths in four different languages. Of the 107 members in total, 47 took oath in Maithili, 25 in Bhojpuri, 24 in Nepali and 11 in Hindi.

At the same venue, another event happened that reeked of cultural insularity. After the ceremony, Chief District Officer (CDO) of Dhanusha urged the members to sign the oath scripted in Nepali even though they had picked their own language to pronounce it, thus infuriating the lawmakers.

For those born in Mahendra’s Panchayat era (including this writer) and having witnessed the forced institutionalization of state policy of ‘one nation, one language, one dress’, this move of choosing one’s own language to take oath is certainly progressive and a step forward in the recognition of diversity. That this happened in Province 2, the only province based on the majority ethnic identity and has been at constant loggerheads with the center regarding recognition of its identity markers—mainly language—is a testament of Madhesi people’s long and hard struggle against a chauvinistic state.

The struggle for recognition of language in Madhes dates back to 1950s. Bedanand Jha established Nepal Tarai Congress (NTC) in 1951 with one of its objectives to make Hindi a state language. In the decade, Tarai witnessed a prolonged movement in defense of Hindi as a language of instruction in schools and against the imposition of Nepali in the education system. The movement gained momentum with National Education Planning Commission report of 1956, based on which the education ministry “ordered all schools to use Nepali as the medium of instruction.” With the implementation of one language policy, NTC formed “save Hindi” committees in Tarai districts and leaders of other political parties also joined the campaign.

Public meetings, protests, marches and strikes were organized in many districts which led to considerable turmoil, with even clashes occurring between pro-Hindi and pro-Nepali groups in Biratnagar. In the general election of 1959, along with NTC, Nepali Congress (NC), Praja Parishad and Nepal Communist Party (NCP) also supported a multi-lingual policy during the election. NC and NCP had released their election manifestos in Hindi. One of the reasons for the electoral rout of NTC is attributed to the fact that it could not differentiate itself from other parties.

With the usurpation of political power by Mahendra and subsequent imposition of Panchayat system and banning of political parties in 1960, fight for language took a backseat temporarily, only to be revived later. Gajendra Narayan Singh established Nepal Goodwill Council in 1985 and later transformed it into Nepal Sadbhavna Party (NSP) in 1990 with one its objective to make Hindi a state language. Even though the party was scoffed by others as being an Indian stooge and following India’s agenda, it was able to bring to the attention the demands of Madhesis to recognize Hindi as a national language. This was possible mainly because of the liberal political environment of the 1990s.

Even as Madhesis continue to struggle for recognition of their language, the state used Khas Kura/Nepali, for forced homogenization and assimilation or exclusion of ethnic groups. In a bid to homogenize diverse ethnic groups, Nepali was made mandatory subject and language of instruction in schools. As if forced homogenization was not enough, a controversial Civil Service Act of 1956 had made it mandatory for the candidates of civil service jobs to be competent in Nepali language. This virtually led to the exclusion of Madhesis from civil service.

During Panchayat era, with a powerful king at the helm, the state-centric nationalism with the Nepali language as one of its pillars was followed enthusiastically. Due to the ban on political activities, the NC was operating mostly in Tarai and border areas of India. The Royal government viewed NC and India as being the main threats to the territorial integrity of Nepali state. In a bid to ‘protect’ Nepal from the ‘ever-present internal and external threat’, the government while reframing citizenship laws included provisions that made it difficult for people of Tarai origin to obtain citizenship certificate. The requirement of fluency in spoken and written Nepali language for obtaining citizenship certificate virtually disenfranchised and denied recognition of Madhesis as Nepali citizens. After the restoration of the multi-party system in 1990s, despite tall claims of inclusion, only Nepali was declared as the official language in the constitution.

While Nepal’s history is rife with events of the state’s use of Nepali language as a tool to counter the imagined doubtful loyalty of Madhesis towards Nepal, the discrimination is not limited to the policy level. It can be equally vociferous on streets. At the oath-taking ceremony, the first vice president of the republic, Permanand Jha was projected as committing a cardinal sin when he pronounced his oath in Hindi. The strident protest that followed and the subsequent nullification of oath by the Supreme Court is a grim reminder of opposition Madhesis have faced.

Thankfully, this time around the oath-taking in multiple languages in Province 2, including Hindi did not bring about much controversy, except some fringe elements burning effigies of Madhesi leaders and demanding preference for local languages. This small victory must be relished since it is a fruit of long and hard struggle of Madhesi people.

Though the struggle to make Hindi the language for the administrative purpose of Province 2 must continue, the provincial government formed by Madhes based parties should not fall into the temptation of adopting one language policy for education and other purposes in the name of cultural conservatism. It should also desist from compartmentalizing people based on the language of the community. Any attempt to link Hindi or any other local language to the ‘pride’ of Madhes would lead to cultural bigotry and produce inflammable results in the long run because Madhes itself has the diversity of languages with none in absolute majority. Emphasis should be laid on cultural liberalism rather than cultural conservatism. It should not be a case of mere tolerance of cultural diversity or promotion of plural multiculturalism. A genuine multicultural society celebrates diversity.

This is the beauty of federalism. As professor Amartya Sen aptly puts it: “A sense of identity can be a source of not merely pride and joy, but also strength and confidence.”

It is important to enable farmers to meet diverse market needs and to tackle changing climates. ... Read More...

Let's not overshadow the issues that Prem Archaya tried to raise: Dr Toshima Karki
10 minutes ago