Love wins out for Muslim boy and Hindu girl 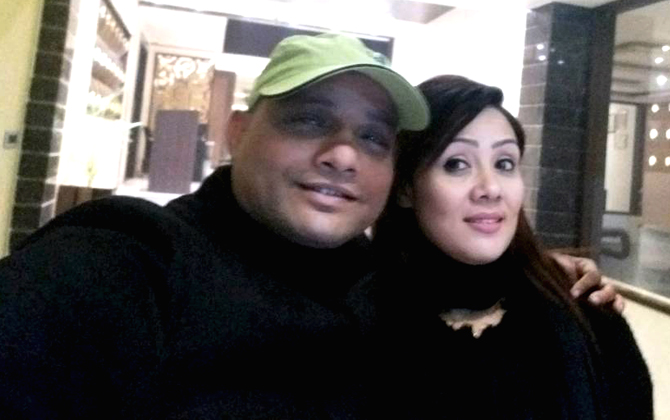 NEPALGUNJ, Feb 15: A Muslim boy falls in love with a non-Muslim girl. The love between them grows amid the fear of their families ruining it one day. Mohammad Safik Behana and his beloved, a Hindu girl Pinki Shah, discuss whether they let go of the beautiful dreams they saw together right from their school days. The mind would suggest one thing, but the heart would not follow it. The lovers then convince each other that the huge barrier of religion will definitely crumble some day, and true love will live on!

The test begins and becomes tougher and tougher until one day love finally wins. Pinky, who is already a mother of two college going sons now goes down memory lane.

“Ours is a very hard-earned love. It happens, when one is Hindu and the other is Muslim. You are made to feel guilty at every step. You might even get killed for loving someone from other religion. We have faced everything to come to this stage,” Pinky reminisces. “But, love is god and god is one,” she adds.

Pinky and Safik's love had begun to bloom when they were still at the secondary level of their education. Both were in the same school - Gausiya Secondary School.  Safik had fallen in love with Pinky at the first sight.

“We had a short conversation then. I had asked him which hero he likes the most. 'Sunil Shetty,' he had said. Then I told him that she should also try to make a body like Sunil Shetty then. He literally joined a gym club,” she laughs.

It was 21 years ago. Back then, love letters would be written on papers 'with a good handwriting'. The boy did the same thing.

“I actually asked my friend to write a nice letter for me and gave it her. At that time, our SLC examination was going on,” Safik recalls.

Pinky took time to respond to it. But later she revealed she liked him equally. As the two were getting closer to each other, their families sensed it. Pinky was kept a hostage at home.

“I had no way to meet him. I had to do a rick. I cut my hand and then when I was taken to the hospital, we could meet briefly,” Pinky narrated.

After five years of such a challenging affair, they tied the nuptial knot without the consent of their families. As there was risk, the couple fled to Mihipurwa of India, where they did anything for survival.

“That was a very unusual period. We were escaping from our own families. Thugs and goons were also following us. We had no money to survive,” Pinky said. Once when the goons attacked Pinky on the way, he fought with four of them all alone and saved her, Pinky added.

The couple then stayed at Baharaich, UP state of India at a friend's house where they got married in the Islamic style. But their hard days were not over. Pinky's family was searching for her like anything. To hide themselves, they had to spend a week in a jungle.

“We were extremely frightened. We were not ready to be caught by our families. So, we were running here and there,” Pinky reminisced. “For seven days, we were in a jungle and had nothing to eat or drink.”

But her family found her out. She was brought back home in Nepalgunj. She was told to 'correct herself' and never look at the Muslim boy again. “First I was taken to Delhi, then we returned home,” Pinky said.

As Pinky would not succumb to the pressure, her parents softened a little. But after one year, she was again taken to Delhi and kept at a relative's house.

“This time, we two could not meet for three years. They had done this thinking that we would be separated this way,” Safik narrated. “But how would that happen? We were in true love!” he added.

Once when Pinky visited her house in Nepalgunj, Safik could meet him. He wasted no time and again they fled to India. For one year, they stayed in Delhi peacefully. But one day, again Pinky disappeared. Her family had reached her and brought her back. Safik, too, came back to Nepalgunj.

“They always tried to separate us. Police, administration was used. But we always fought back,” Pinky narrates.

Pinky's family was getting tired of their unsuccessful attempts to ruin their love. They finally accepted the couple. Meanwhile, Pinky gave birth to a son. And this brought the families even closer.

Now, the couple is already the parents of two - Samir and Sahil. Samir is pursuing software engineering in Banglore while Sahil is a 10th grader. Safik has also well established himself in business and even politics. He is Chairperson of Behana Nepalgunj Sub Metropolis - 4. On the other hand, Pinky is a very happy housewife.

“I feel that love is god and love is the message of every religion. When your love is true, you are given the power to stand for it. I still remember how we stayed in the jungle for a week without food and water. True love cannot be expressed in words,” Pinky concludes.

A Hungarian love story called ‘On Body and Soul’ about two lonely hearts working in a slaughterhouse in Budapest won... Read More...

Minister Jhakri to resign from her post
15 hours ago

Minister Jhakri to resign from her post
15 hours ago

One arrested with marijuana
15 hours ago

Three were ‘playing’ with a pistol; one injured, two arrested
15 hours ago