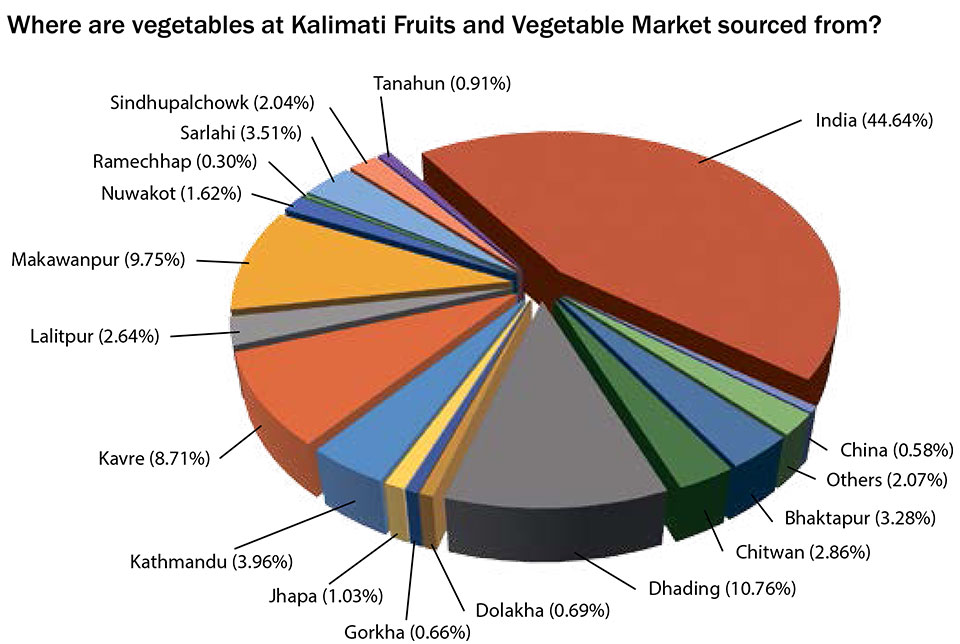 According to the data of the first six months of Fiscal Year 2017/18, 44.64 percent of vegetables and other edible items sold at the market came from India, while 0.58 percent came from China. India's share in total vegetables traded in the market was 44.73 percent in FY2016/17, while China's was 0.52 percent.

The market, spread over 45 ropani of land, is a source of daily bread to a workforce of 563, including 387 wholesalers, 66 retailers and other staffers, and families dependent on them.
Speaking at a Public Hearing Program organized at the board on Thursday afternoon, Binaya Shrestha, deputy director of the board explained: “The production of vegetables such as potatoes, other green leafy vegetables such as cabbage and cauliflower along with pointed gourd (parwal) and lady's finger, in Nepal is not adequate considering the demand. Therefore there is a need to import vegetables from India.” He further added that a lion's share of fish traded in the market is imported from India.

Seconding Shrestha's claim, executive director of KFVMDB, Tekendra Prasad Paudel, added: “Although potatoes are cultivated in the country, they can only tend to the demand for three months. Nepali farmers do not seem attracted toward onion farming. So, the country has to import this vegetable which is seldom out of supply in Nepali kitchens.”

Paudel explained that garlic tops the list of vegetables imported from China. According to the data, until mid-January, 2018, 108,270 tons of vegetables entered the market premises. In FY 2016/17, the market had traded 249,200 tons of fruits, vegetables, fish and spices combined.
This means that market sold around 48,938 tons of imported vegetables in the first half of FY 2017/18 and 112,638 tons in the past fiscal year.

Similarly, 85.86 percent of the commodities entering the market in the review period was vegetables, 9.80 percent fruits, 3.20 percent spices, 1.60 percent fish and 0.08 percent other commodities.