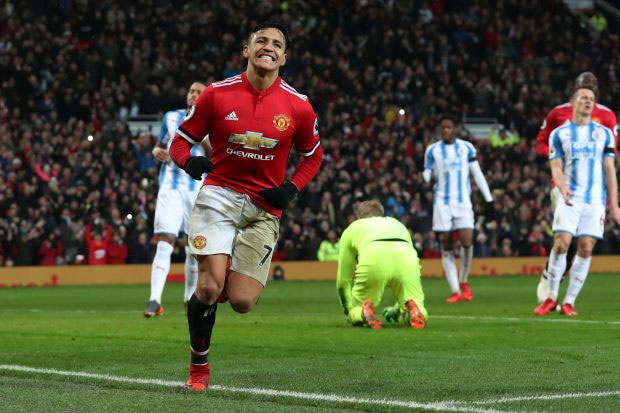 LONDON, Feb 4: Manchester United’s new signing Alexis Sanchez scored on his home debut in a 2-0 win over Huddersfield Town as they took advantage of a slip by cross-town rivals and Premier League leaders Manchester City on Saturday.

After City had been held 1-1 at Burnley, their daunting lead over United was reduced to 13 points when Jose Mourinho’s side eventually overcame a defensive Huddersfield side.

It took 55 minutes before Romelu Lukaku broke the deadlock after which Sanchez won a penalty, had it saved by Jonas Lossl, but tucked away the rebound in the 68th.

“We had to be patient but had to keep the intensity high and the pressure,” Mourinho told the BBC.

“We had to break down the Berlin wall organised so well by David Wagner.”

City paid the price for missed chances as they drew at Turf Moor with Johann Berg Gudmundsson’s 82nd-minute equaliser earning Burnley a point.

City had dominated possession but, after taking the lead with a fine strike from Brazilian Danilo in the 22nd minute, the visitors failed to press home their advantage.

“We are frustrated in terms of the result but the performance was outstanding,” said City manager Pep Guardiola.

City have 69 points, ahead of United on 56 with third-placed Liverpool (50) at home to Tottenham Hotspur (48), who are fifth, on Sunday, while Chelsea (50) visit mid-table Watford on Monday.

Sixth-placed Arsenal (45) led Everton 4-0 at halftime and won 5-1 as Welsh international Aaron Ramsey scored the first hat-trick of his career. Record signing Pierre-Emerick Aubameyang was also among the scorers.

Huddersfield’s defeat at Old Trafford dropped them into the bottom three for the first time since they were promoted as Southampton and Swansea City both moved above them.

Bottom club West Bromwich Albion lost 3-2 at home to Southampton on an emotional day at the Hawthorns, where there was a minute’s applause for the home side’s former striker Cyrille Regis, who died aged 59 last month.

Albion led early on through Egyptian defender Ahmed Hegazi but were rocked by three goals in a quarter of an hour either side of halftime.

Southampton held on after Salomon Rondon’s goal to secure a first win in 13 league games, leaving Albion four points adrift at the bottom with 20 points.

Improving Swansea earned a valuable point with Federico Fernandez’s equaliser at Leicester City, for whom Jamie Vardy scored his 13th goal of the season in all competitions.

Bournemouth consolidated their place in the top 10 by coming from behind to beat Stoke City 2-1 and, on a good day for the south-coast sides, Brighton & Hove Albion beat West Ham United 3-1 to draw level with them on 27 points.