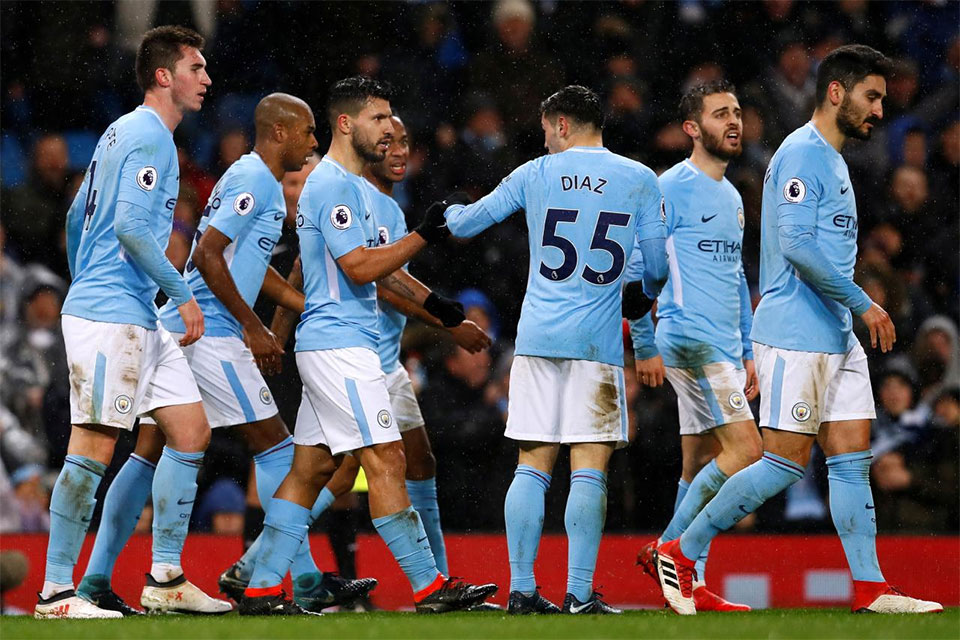 Pep Guardiola’s runaway leaders, whose new record signing Aymeric Laporte enjoyed an impressive debut, surged 15 points clear of their neighbours, who were outplayed by Spurs at Wembley after Christian Eriksen scored in just under 11 seconds.

The last night of the transfer window provided a fascinating backdrop to the midweek fixture list with Chelsea’s final-day signing Olivier Giroud doubtless shocked at Stamford Bridge to see the champions suffer a remarkable 3-0 loss to Bournemouth.

Manchester City’s 12th straight league home win, thanks to goals from Fernandinho, Kevin De Bruyne and Sergio Aguero, took them to 68 points - level with Tottenham Hotspur in 1960-61 as the best record by any club after 25 matches of an English top-flight season.

Manchester United are on 53 points with Chelsea dropping to fourth on 50, the same as third-placed Liverpool. Spurs moved to within two points of the pair on 48.

Pep Guardiola’s all-conquering City took their tally of goals in all competitions this season to 100 when the outstanding De Bruyne, who had provided a superb first-half assist for Fernandinho to shoot home, scored their second.

Frenchman Laporte, signed from Athletic Bilbao for a City club record of 57 million pounds on Tuesday, slotted into their defence comfortably.

His debut left Guardiola enthusing: “Yesterday he made the first training session but today we saw how good he is. He made an amazing, amazing performance.”

The match of the night at Wembley, though, played in front of a record crowd for a Premier League game of 81,978, proved a disappointing one for Jose Mourinho as his own major signing Alexis Sanchez failed to shine after United had conceded a “ridiculous” early goal.

Eriksen cashed in with a neat finish after Spurs had launched a long ball straight from kickoff that was flicked on by Harry Kane and Dele Alli.

Timed at just under 11 seconds, it equalled the third fastest goal scored in the Premier League era after the 10-second efforts netted by former Spurs favourite Ledley King and Newcastle United’s Alan Shearer.

When Phil Jones, who was bullied by Kane for the first goal, hammered the ball clumsily into his own net when trying to clear from Kieran Trippier’s cross midway through the first half, Mourinho conceded that the own goal “mentally killed us”.

“After 10 seconds, we made a ridiculous mistake,” Mourinho told reporters. “My players have watched the Tottenham kickoff many, many times. It was a really, really bad goal.”

Antonio Conte suffered one of his worst Premier League defeats at Chelsea after three second-half goals in the space of 16 minutes from Callum Wilson, Junior Stanislas and Nathan Ake earned Eddie Howe his best top-flight win with the Cherries.

“We have to accept it’s a bad result and understand that we have to fight this season,” Conte told the BBC.

West Brom’s defeat left them rooted at the foot of the table while Southampton also remain in the bottom three despite largely dominating while coming from behind to earn a 1-1 draw at home to fellow strugglers Brighton & Hove Albion.

Brighton are just a point above the relegation zone alongside Newcastle, who have now not won a home league match in eight attempts after goalkeeper Karl Darlow’s 85th-minute own goal earned Burnley a 1-1 draw at St James’ Park.

Stoke City’s goalless draw with Watford also left them alongside Newcastle and Brighton, just four points ahead of West Brom.

Performance of the night came from Everton new boy Theo Walcott, who scored his first two goals since signing from Arsenal in the 2-1 victory over Leicester City.