TU continues to burn plastic on its premises 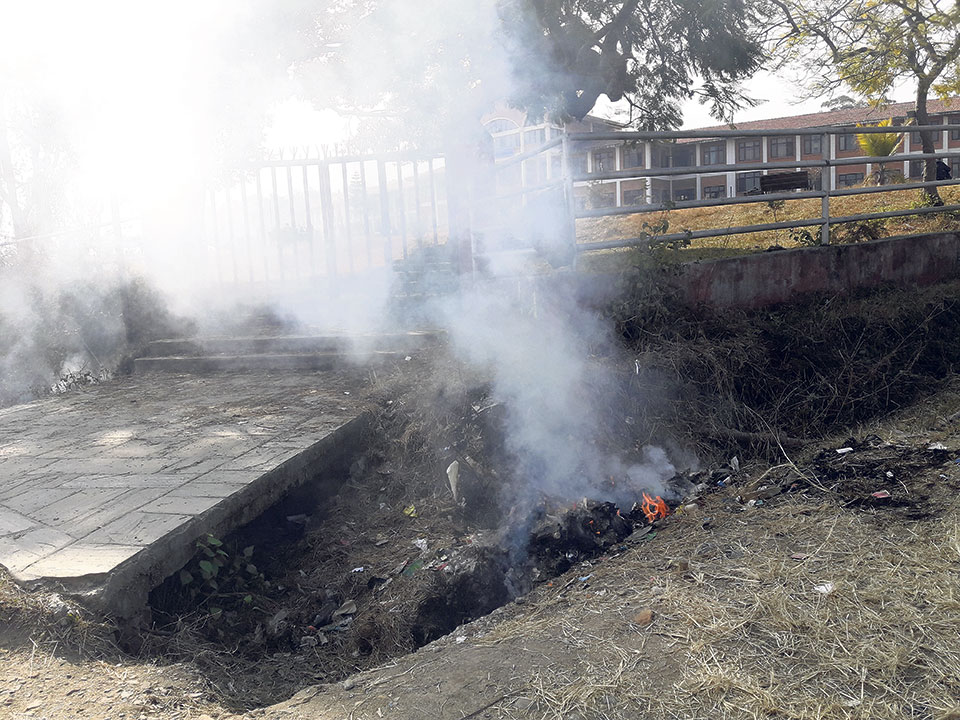 Plastic waste being burnt on TU premises on Thursday.

KATHMANDU, Jan 25:  At the behest of the Principal of Tribhuvan University (TU)'s Central Campus, Krishna Prasad Acharya, the leaders of student unions, students and TU officials burned plastic heaps in front of each of the 32 central departments of the university from 11AM to 1PM on Thursday.

Instead of demanding that TU authorities manage waste in a proper way, the leaders of student unions and students accompanied TU officials to burn plastic and waste materials thrown haphazardly on the premises of the oldest and biggest university of the country. "We opposed burning plastic, but TU authorities did not listen to us," said Shambhu Bhatta, a Master's level student at TU.

The student leaders and students claimed that they participated in burning plastic on the university premises after Principal Acharya sent letters to them, asking them to participate in the university clean-up campaign. "He called us and we came to burn plastic," said Mangal Bahadur Thapa, president of All Nepal National Free Student Union affiliated to the CPN-UML.

Burning plastic waste, which is restricted by the national and international laws, is a normal phenomenon in TU. Plastic wastes are openly burned on the premises of TU, in front of all the Central Departments including Environment, Chemistry, Physics, Biotechnology, Botany, Statistics, Geology, Hydrology and Metrology at Kirtipur of Kathmandu.

TU burns plastic almost every week, said Jagadish Devkota and Tilak Upadhyaya, coordinator and central member, respectively, of the All Nepal National Independent Student Union-Revolutionary, affiliated to the CPN (Maoist Center). They, who participated in burning the waste said, "We just participated without invitation letter in order to clean the university premises," they both said.
Samjhana Khatri, president of Nepali Congress's sister organization Nepal Student Union, TU Chapter, said that they took part in the campaign after Principal Acharya invited them in writing to clean the university premises.

KATHMANDU, Jan 15: Burning waste materials, which is restricted by national and international laws, is a normal phenomena in Tribhuvan... Read More...

TU gave affiliation to campuses without own premises

KATHMANDU, Sept 30: Tribhuvan University (TU), the oldest and biggest university in the country, does not have any records of the lands and buildings owned by college campuses to which it has granted affiliation. Read More...

Lalitpur DAO suspends all but essential services
2 hours ago
Residents can install EVs charging units for their personal use: NEA
1 hour ago