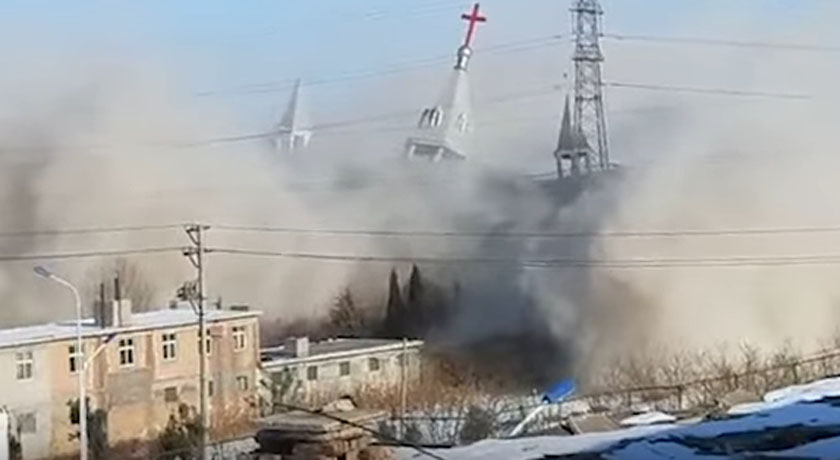 Hong Kong, Jan 11: A church in northern China was demolished this week, the second in less than a month, sparking fears of a wider campaign against Christians as authorities prepare to enforce new laws on religion.

Police cordoned off the area around the Golden Lampstand Church church in Linfen, Shanxi province, on Sunday before construction workers detonated explosives inside, according to witnesses and the head pastor. After the initial explosion, crews broke apart the remaining pieces with diggers and jackhammers.

A Catholic church in the neighboring province of Shaanxi was also reportedly demolished last month, 20 years after it originally opened.

China guarantees freedom of religion on paper, but in practice authorities heavily regulate many aspects of religious life. Churches must be officially sanctioned and pastors must adhere to a host of rules imposed by the government.

The restrictive policies have given rise to “house” churches, independent places of worship that exist outside official channels. Authorities periodically arrest pastors or demolish buildings used by unsanctioned congregations.

But authorities have taken a harder line since 2013 against towering crosses and large cathedrals. Officials launched a sweeping crackdown on churches in Zhejiang province that accelerated in 2015, and more than 1,200 crosses have been removed, according to activists.

In an annual report on freedom of religion, the US state department found that “the government physically abused, detained, arrested, tortured, sentenced to prison, or harassed adherents of both registered and unregistered religious groups for activities related to their religious beliefs and practices”.

A pastor at a nearby church arrived after the blast at the Golden Lampstand church and watched construction crews break apart the remains of the building. The pastor asked his name not be published for fear of retaliation by the authorities.

There were “more police than I could count” preventing a crowd of onlookers and worshipers from approaching the site, the pastor said.

“My heart was sad to see this demolition and now I worry about more churches being demolished, even my own,” he said. “This church was built in 2008, there’s no reason for them to destroy it now.”

The Golden Lampstand church was built a decade ago and cost a total of 17m yuan (£1.9m) at the time, according to the head pastor Yang Rongli. Yang previously spent seven years in jail on charges of “assembling a crowd to disturb traffic order” and has been under police surveillance since her release in October 2016, according to China Aid, a Christian NGO based in the United States.

“I think this might be a new pattern against any independent house churches with an existing building or intention to build one,” said Bob Fu, founder of China Aid. “It also could be a prelude to enforcing the new regulation on religious affairs that will take effect in February.”

The government revised laws regulating religious groups last year for the first time since 2005, increasing control over places of worship from limiting the construction of statutes outside churches to imposing fines of up to 300,000 yuan (£34,000) for holding “unauthorized religious activities”.

Another church was demolished in a small village in Shaanxi in late December, according to AsiaNews, a China-focused Catholic news website. The building was built in 1999 and local authorities did not give a reason for the demolition.

KATHMANDU, June 20: A week-long campaign against drug abuse has been launched today on the occasion of the International Day... Read More...