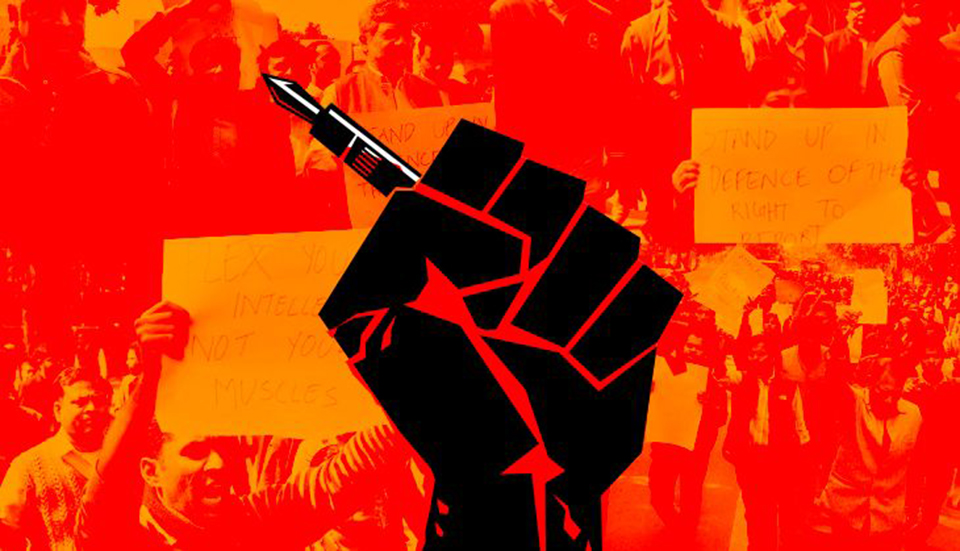 No country in South Asia enjoyed complete press freedom in 2017. Afghanistan was affected by conflict, Nepal and Sri Lanka by post-conflict situation.

Press suffered in South Asia because of prolonged civil war in Afghanistan, post-conflict situation in Nepal and Sri Lanka, growing religious extremism in Bangladesh and Pakistan, provocative Hindu nationalism in India, and political instability in the Maldives.

According to RSF, 16 journalists and media assistants were killed in the region, including nine in Afghanistan, four in India, and one each in Bangladesh, Pakistan and the Maldives. Out of 180 countries that were assessed for the state of press freedom, RSF press freedom index positions the Maldives (117), Afghanistan (120), India (136), Pakistan (139), Sri Lanka (141) and Bangladesh (146) respectively. This shows status of press freedom in most of South Asian countries was alarming.

Bhutan has significantly improved its ranking in RSF freedom index over the past three years advancing from 104th to 84th position. However, the country has a highly regulated media environment and is biased towards private media. Bhutan’s Information Communications and Media Act provides more power to government bodies and criminalizes defamation. Consequently, self-censorship was encouraged and free press activities were restricted, forcing journalists to face unfair trails.

After more than 20 years of conflict and peace process, Nepal conducted local, provincial and federal elections in 2017.   As a result election-related violence against media and journalists—such as physical attacks, death threats, arbitrary detentions and denial of access to information—dominated Nepal’s media landscape in 2017.  Most notably, Nepal Police frequently harassed journalists, arrested them and blocked selective online portals that published critical content. It also asked the journalists to identify sources of news story. Similarly, the government of Nepal issued Online Media Operation Directive without adequate consultation with stakeholders. This could foster self-censorship and restrict online media development. Impunity for the crimes against journalists that were killed or disappeared during the conflict and post-conflict periods remained intact.

According to the Federation of Nepali Journalists (FNJ), at least 36 journalists were killed and four were disappeared during the periods. Only six cases completed legal prosecution.

In the Maldives, President Abdulla Yameen introduced some regressive laws that treated defamation as a crime and journalists as criminals. Based on the law, Maldivian government imposed hefty fines on Raajje TV for alleged defamation cases. Failure to pay such fines could cancel the TV’s broadcasting license. On April 23, Yameen Rasheed, a vocal critic of government policies, was stabbed to death at his residence, which caused other journalists and writers to be silent against government wrongdoings.

It is shameful that the press freedom status of India, the largest democracy on the planet, was worse than Afghanistan and very close to Pakistan.

Post-conflict Sri Lanka, especially after the presidency of Maithripala Sirisena, verbally assured media and journalists to improve its press freedom status. Accordingly, there were some legal and policy reforms, including the Right to Information Act-2017, that were widely appreciated as important step towards securing access to information and promoting free press environment. However, new policies were not adequately implemented as promised. Like in Nepal, cases related to crimes against journalists were not given priority. Tamil language media outlets were persecuted.

The Freedom Network, a media watchdog in Pakistan, reported that 21 cases of violence against journalists were recorded only in October and November. Journalists were targeted from virtually all sides—the government security forces, intelligence agencies, religious extremists and rebel groups.

No country in South Asia enjoyed complete press freedom in 2017. While Afghanistan was affected by conflict, Nepal and Sri Lanka were affected by post-conflict political transformation.

Majority of the countries, including Bhutan, Bangladesh and the Maldives, criminalized defamation cases and imposed hefty fines on journalists. India, Bangladesh and Pakistan turned out to be the most intolerant countries for journalists and advocates of free expression, such as bloggers and social media users. Impunity for the crimes against journalists was conspicuous in most countries.

Of the 65 journalists and media persons killed in the world in 2017, 16 were from South Asia, according to RSF. RSF labeled Afghanistan as the third deadliest country in the world after Syria and Mexico. Except for Afghanistan, there was no visible conflict in South Asian countries but the most populous countries like Bangladesh, India and Pakistan were increasingly intolerant to journalists and advocates of press freedom. If religious extremism is not checked on time, South Asia will continue to remain a danger zone for journalists.

The author is a researcher on media ethics and accountability. He is affiliated to
University of Ottawa, Canada

There is also an urgent need to strengthen the now at best patchy monitoring mechanism to evaluate the safety of... Read More...

Hearing on case against Home Minister Lamichhane continues
44 minutes ago