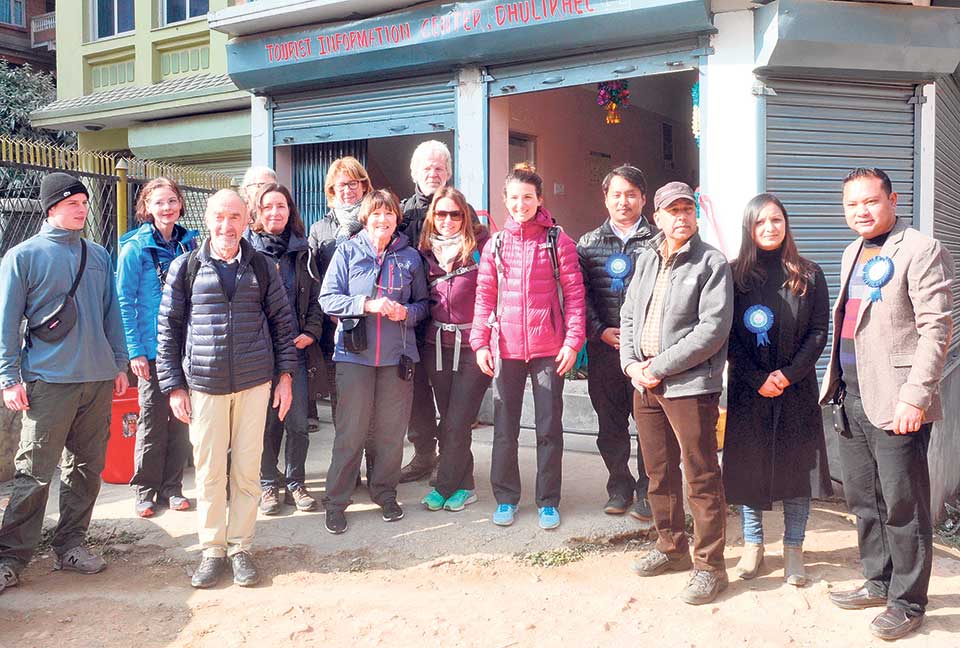 Tourists and officials pose for a photograph after the inauguration of Tourist Information Centre in Dhulikhel, on Tuesday. Photo: Madhusudan Guragain

BANEPA, Dec 28: A tourist information center has been opened at Dhulikhel, of Kavre, to provide necessary information to tourists and to promote tourism attractions in the district.

Joint Secretary Rabindra Dholiju Shrestha inaugurated the information center set up by Dhulikhel Environmental and Tourism Promotion Committee. “The center shall meet its goal if it can provide all type of information to tourists and assistance to those willing to invest in the field of tourism in this town famous for its natural and cultural attractions,” said Shrestha.

Although the town has plenty of hotels and resorts, due to the lack of proper information, many tourists return to the capital after staying a night here. “The information center will provide details of Dhulikhel and other nearby destinations. At the same time, tourists and entrepreneurs can receive information conveniently,” said Prem Kantha Shrestha, president of the Regional Hotel Association of Nepal and Managing Director of Dhulikhel Lounge Resort.

Areas like Dhulikhel, Panauti, Namo Buddha, Panchkhal, Dolalghat and Timal are popular tourist destinations among tourists in the outskirts of the Kathmandu Valley.

“We have collaborated with Nepal Tourism Board (NTB) to publish a guidebook for acquainting domestic and international tourists with places of cultural, historical, religious and geographical significance in and around Dhulikhel,” said Sun Kumar Makaju Shrestha, Vice President of Dhulikhel Environmental and Tourism Promotion Committee.

Meanwhile, Dhulikhel Municipality is taking necessary initiatives to repairs old temples and houses of historical and archeological significance in the Purano Bazar are of Dhulikhel to retain its typical Newari outlook, according to Romi Prasad Byanju, chairperson of Ward 7 of the municipality.

The municipality has also created environment conducive for investors, including non-resident Nepalis, who want to run hotels and other tourism enterprises in the area. The municipality has decided to waive off local taxes for businesses and industries that employ more than 25 individuals for five years. Likewise, it has promised to ease access to electricity, drinking water and roads to these enterprises, according to Dipesh Shrestha, secretary of the committee and a promoter of Dhulikel Eco Resort.

Although similar information center was established by Dhulikhel Municipality and Rotary Club of Dhulikhel earlier, it was shut down in September 2009, due to financial reasons.

MYAGDI, May 11: A digital tourist information center has been established in the district headquarters of Myagdi, Beni, with the... Read More...

URLABARI (Morang), Aug 9: The road linking the tourist destination, Letang that was blocked by a mudslide for the past... Read More...

Agitating IOM students stage sixth round of protest against Dean (Photo Feature)
45 minutes ago
If you want to seek your property share, go to Baluwatar: MP Agrahari
55 minutes ago