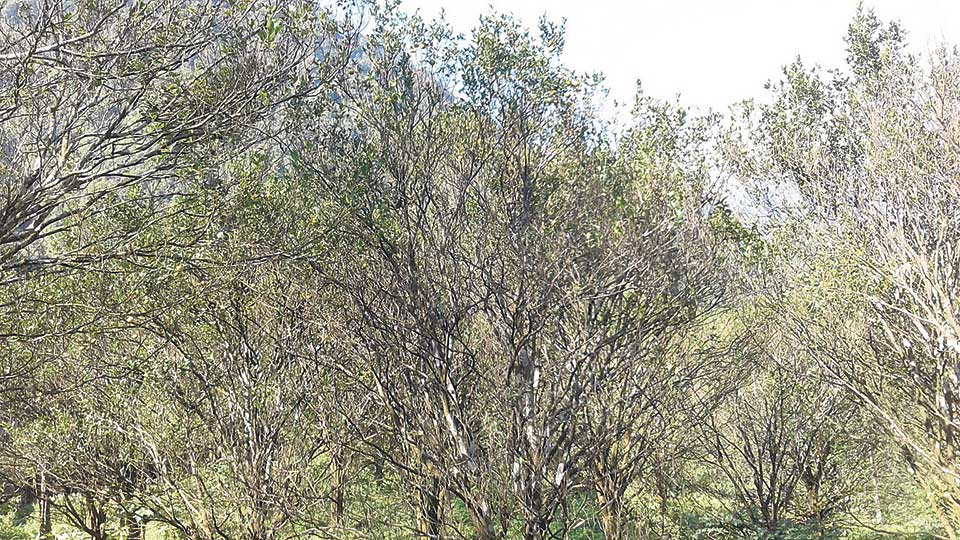 ILAM, Dec 26: Salakpur in Rong Rural Municipality Ward 6 of Ilam district was considered to be hub for orange farming. But not even one decade after the village started farming oranges, 90 percent of the orange trees have dried out.

Just five years ago, Salakpur had sold oranges worth more than Rs 10 million. The oranges used to be exported not only to nearby markets, but markets as far as Kolkata in India.

"Salakpur, once considered the orange capital of the region, is now but history. This year we not only saw a steep decrease in production but also the ruin of the orange trees," said Gobinda Paudel, a local.

However, sale of oranges has come to a halt this year with not a single unit of orange being exported from the district.

"Three years ago, I had sold Rs 300,000 worth of oranges from my orchard. However, this year, not 30 oranges were harvested from my orchard as most plants remain lifeless," said Nanda Lal Adhikari, a local.

Oranges produced from the orchards of Salakpur had gained popularity in districts of eastern Nepal like Ilam, Jhapa, Sunsari, and Morang and West Bengal of India.

The region saw an influx of visitors during winter to taste and purchase oranges. "Up to 3,000 individuals flocked Salakpur a few years ago but now just memories of those days remain," said Dambar Rai explaining that this year's yield was not even adequate to fulfill personal demands.

Locals here have been dependent upon Indian technicians for knowledge on orange farming and have also been using chemical fertilizers forbidden in Nepal. "Fertilizers outlawed by Nepal are in use here and the excessive use of chemicals may have resulted in the destruction of orange trees," stated a local farmer.

Farmers here have been cultivating oranges and cardamom in the same field.

Due to the difference in the habitat of the two plants, farmers assume that their lack of knowledge in the field has resulted in the drying of orange trees.

However, cardamom plants have thrived, giving the farmers a glimmer of hope.

KATHMANDU, Nov 17: The Growthways, a media and entrepreneurship convention organized by Nepal Republic Media, has kicked off at Soaltee... Read More...

Agitating IOM students stage sixth round of protest against Dean (Photo Feature)
52 minutes ago
If you want to seek your property share, go to Baluwatar: MP Agrahari
1 hour ago