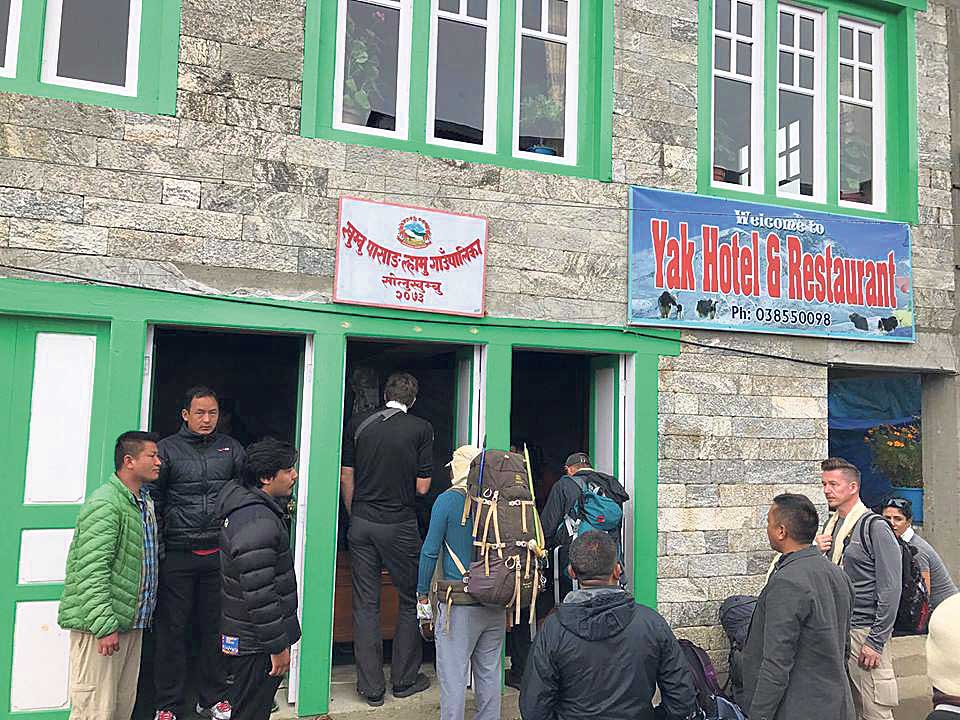 Tourists wait for their turn to pay entrance fee at the Khumbu Pasang Lhamu Rural Municipality Office in Solukhumbu in this recent photo. Photos: Radha Dhungana

Although the tourist season is wrapping up, tourists are still entering the rural municipality at a constant rate, which hovers around 100 per day.

Despite local entrepreneurs’ strong opposition to the collection of entry fee, the officials have been collecting the fee. They do not even recognize the Trekkers’ Information Management System (TIMS) card issued by the Department of Tourism (DoT) and the Trekking Agencies Association of Nepal (TAAN).

“The rural municipality has mobilized its rights to collect and allocate tourist revenue as suggested in the constitution, as the funds collected previously were not used for tourism development of the region,” said Nim Dorje Sherpa, chairperson of Khumbu Pasang Lhamu Rural Municipality. Sherpa informed Republica that the funds now collected will be used for the tourism promotion of the rural municipality.

The officials are seeking to make use of this fund to prioritize tourism promotion in the region. The amount collected is set to be used to improve and construct roads between Lukla and the Everest Base Camp along with increasing tourist infrastructure in the region.

TANAHUN, May 16: UML candidate Durga Bahadur Thapa has been elected as the chief of Devghat Rural Municipality. ... Read More...

Federal Democratic Republic came through the sacrifices of martyrs: PM Dahal
56 minutes ago