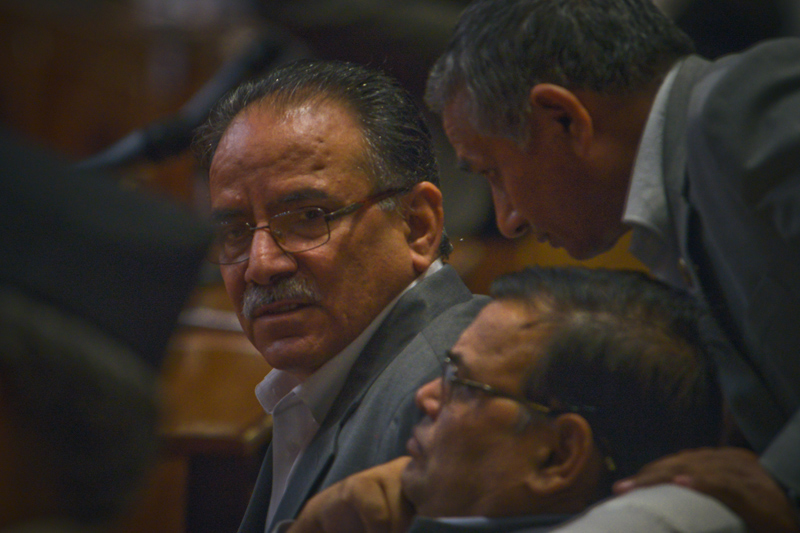 There is now unanimous consensus in Nepal that the recent government change was actually orchestrated by New Delhi
While defending the no-confidence motion against Prime Minister KP Oli, Prachanda told the House on July 22 that he “felt” he and his party were being ‘cornered’ by CPN-UML and the PM was not sincere in implementing the constitution. He felt attempts were being made to “finish” the Maoists. The PM, Prachanda argued, seemed to ignore him and instead inched closer to monarchists and anti-federalist forces.  “Felt” and “seemed” were the words he used many times in his hour-long speech justifying Oli’s departure.

When UML leader Subhash Nembang sarcastically asked why he (Prachanda) had to change the government that he himself had helped during its worst adversities, Prachanda had his head bent down. He occasionally responded to Nembang’s attack with a sly smile.

On July 24, the architect of no-confidence motion, Sher Bahadur Deuba, began his address by saying how Oli was a great friend. He recalled the days he and Oli spent together in jail fighting Panchayat. He wanted to make it appear that he was unhappy to dethrone Oli. But such government change is normal in a parliamentary democracy, he said. It was like one party telling the other: You have had enough, now it is our turn.

When prime minister revealed that he had tried to convince Prachanda many times not to become an agent of instability, Prachanda listened to the PM with a deep sense of regret.

You must have read it in his face if you watched the PM’s July 24 resignation speech.

Therefore, when Chairman of CPN Maoist Center Prachanda will take oath as prime minister this week, in what will be his second inning in Singha Durbar, he will be starting with a baggage of controversies, a track record of flip-flops and at lot of guilt. He will start as a leader with no roadmap to resolve constitutional issues.

There is unanimous consensus along party lines and among general public that the recent government change was actually orchestrated by New Delhi, and Nepali Congress and Maoist leaders were simply used as pawns. Sujata Koirala has already admitted to Delhi’s hand. The way some Indian journalists and intelligentsia celebrated Oli’s exit has shown it was indeed so.

Nepalis will now see in the prime minister’s post the person who spent half his political career opposing and criticizing India. He maintained that opposition until a day before he registered a no-confidence motion. This merits a short review of Prachanda’s anti-India personality.

Prachanda had in 2009 sacked then army chief, Rookmangud Katawal, with UML’s approval. Reportedly, then UML chairman Jhalanath Khanal had asked him to go ahead with the move from Beijing (where he was at the moment). When Prachanda pulled the trigger, UML pulled support from his government. Prachanda had to resign.

Prachanda attributed UML’s U-turn and subsequent fall of his government to Indian intervention. He accused UML of acting as India’s agents. “Some political parties and leaders who approved of the action [army chief’s sacking] in the beginning retreated” and “treated such a sensitive issue with frivolity,” he said in his resignation speech. He cautioned “all patriotic Nepali sisters and brothers to visible and invisible activities of some international power centers on Army chief issue.”  Then he told India, “we absolutely reject any intervention in our internal affairs.” “We are not ready to bow our head in front of foreign masters by forgetting the sacrifice of thousands of patriotic individuals,” he thundered.

Out of Singha Durbar, he then challenged India from the streets of New Baneshwor. He called his successor (Madhav Kumar Nepal) India’s puppet. He hardened his position against India up until the time of constitution promulgation. After the constitution promulgation he taunted India from Tudikhel: What do you think of yourself? We are not your yes-men.

This is why Prachanda’s sudden shift to becoming India’s darling has become a matter of debate in the media. It was him who stood by Oli during the most difficult times of economic blockade. He was instrumental in promulgating the constitution despite strong Indian pressure to do the contrary. People liked him then for taking an unflinching stand on constitution and against Indian highhandedness. Today, as Subhash Nembang said, it does not feel like he is the same person.

This is not just a perception. Until up to September 2015, Indian meddling was discussed only in hush-hush. That Delhi wanted take revenge against Prachanda for making Beijing his first port of call and that it wanted to retain Katuwal became public only after the fact.

India was discussed in the media only tangentially. But after the Indian intervention in constitution making and four and half months of economic blockade, Nepali media has become much more vocal against India.

Prachanda himself does not seem happy with what he did. One UML leader confided to this author that after listening to Oli’s resignation speech, Prachanda was so overwhelmed with guilt he did not know what to say to Oli. Then he went to shake hands with Oli, as if in apology. He is said to have called Oli “a true statesman.”

In his parliament speech last week, Prachanda lamented that he and his party were only being used by UML. In fact, it is Prachanda and his party that were used this time to pave the way for Nepali Congress’s comeback in nine months and to reestablish Delhi as a key player in Nepali politics. With Madheshi forces mellowed and willing to join the government, Congress might later snub Maoists.

Worse, it is believed Prachanda has been made PM to ensure certain things don’t happen, including President Xi Jinping’s Nepal visit, implementation of trade and transit deals with China and building fast-track through internal resources rather than with India’s help. Prachanda’s success will lie in if he can prove these speculations wrong.

Prachanda has the most to lose with the new arrangement. UML can leverage its nationalist stand for political gains. Congress will take credit for provincial and national elections. But Prachanda’s Maoists will have nothing to fall back on with its old ideological space taken up by Mohan Baidya, the radical space by Netra Bikram Chand and liberal democratic space by Baburam Bhattarai.

Meanwhile, KP Oli has captured the imagination of the masses. Since his resignation, he has been telling the media what he had tried to accomplish and how India, through its stooges, brought him down for trying to work for the country. He has been telling people how he never bowed down to anti-nationalist demands.

Oli’s message resonates among the masses. Babauram Bhattarai is all praise for Oli’s vision for development. Cine star Rajesh Hamal called him “the man who has won by being defeated.” Perhaps this is the first time an outgoing PM in Nepal has been so applauded.

Rarely does a PM begin his tenure with low confidence and with sense of guilt for dethroning his predecessor. But such a moment will come in Nepal this week. Rarely does a moment come in history when a successor plots the removal of his predecessor and yet calls him a “statesman”. This moment came in Nepal’s history last week.

Seven years ago, when Prachanda resigned for the sake of “nationalism” and “national sovereignty” there were people to sympathize with him. Today, he is seen as a person who is being used to serve the interests of those who want perennial instability in Nepal.

What ultimately matters in politics is not how long you ruled but what impact you made during your rule. Despite multiple shortcomings on governance, Oli left something for people to remember him with. Will Prachanda also be able to do something that makes people proud of him? So far, I have not met a single person who answers this question in affirmative.

Never mind its pro-poll pronouncements, there is now a big reason to doubt the commitment of the ruling Nepali Congress-CPN... Read More...

How Hukam derailed Nepal’s vaccine procurement: a story of power, greed and commission
13 hours ago