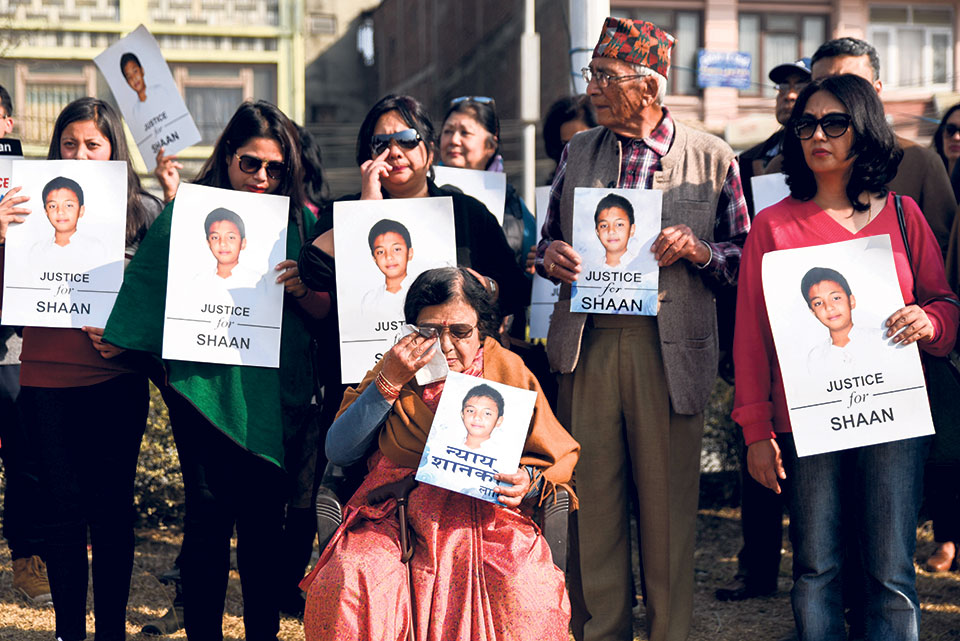 KATHMANDU, Jan 21: A large mass of protesters gathered at Maitighar Mandala in the capital on Saturday, demanding action against the charge-sheeted principal of the Nainital-based Sherwood College, whose negligence apparently caused the death of a Nepali student Shaan Prajapati in 2014.

On November 15, 2014, Shaan, a ninth grader in Sherwood died in a local hospital of Noida apparently after catching pneumonia. After his death, Shaan's family accused the school authority for not informing them about the illness of their child. Since then, the victim's family and relatives have been staging peaceful protests in India and Nepal, appealing for justice.

In December 2015, a charge-sheet was filed by the police against Amandeep Sandhu, the principal of Sherwood College. Despite facing a criminal trial, the accused is still holding the reputed position of the school which has greatly disappointed the victim's family. Three years after the death of the 14 years old boy, the Indian government is yet to take action against the culprit. "How can a person charged with a serious crime be the principal of a reputed school which has a legacy of 50 years?" asked Ujjwal Bikram Thapa, a social worker and a central member of Rastriya Prajatantra Party Prajatantrik (RPPP).  "The Indian government cannot deny justice by letting the perpetrators walk free."

Sherwood, which is one of the top ten ranked schools of India, has a large number of Nepali students.  Former Indian and Nepali students of Sherwood along with family members of the deceased have time and again picketed the school authority requesting the Rt. Rev. Bishop of Agra, who is the Chairman of the governing body of Sherwood to sack the principal who is facing a criminal trial.

For the last three years, Neena Shrestha, a single mother of late Shaan Prajapati has done everything possible to punish the perpetrators responsible for the death of her only son. "Clearing all the hurdles and obstacles we have now reached near justice. Now, the time has come for us to see the culprits behind the bar," said Shrestha.

Protesters have given a ten-day ultimatum to the Indian court for sending the principal behind the bar. "This is a time for the Indian Judiciary to prove that for justice India stands by the truth," said RPPP leader Thapa who is also a former student of Sherwood. Protesters have also warned to picket the school authority if the current school chairman does not sack Sandhu from his post in the next ten days.

According to RPPP leader Thapa, this fight is not just about Shaan but hundreds of thousands of Nepali students in India who are treated unfairly. "This fight should be a lesson for the Indian schools, that when we send our kids there they should be taken care of," said Thapa.

Family of drowned girls yet to get promised relief

RAUTAHAT, Sept 9: The family members of the four girls drowned in an open pit dug up for road construction a... Read More...

I will get trust vote with the support of CPN (Unified Socialist): Bagmati CM Shakya
19 hours ago

President confers decorations and awards on 903 individuals
2 hours ago