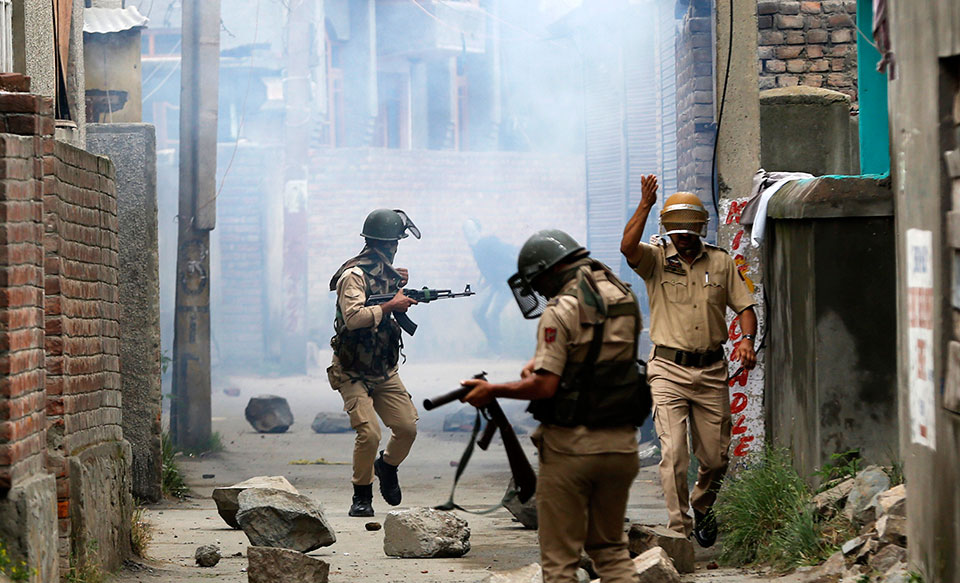 Indian policemen clash with Kashmiri protesters after the funeral of local rebel Aqib Ahmad in Srinagar Indian controlled Kashmir, Wednesday, July 12, 2017. Anti-India protests and clashes erupted in the main city in Indian-controlled Kashmir after three men police identified as Kashmiri rebels were killed in a gunbattle with government forces. (AP)

SRINAGAR, India, August 5: A gunbattle between Indian troops and Kashmiri rebels on Saturday killed three insurgents in the disputed Himalayan region and triggered a new round of anti-India protests and clashes.

The fighting began after government forces raided a cluster of homes on a tip that rebels were hiding in northwestern Sopore area, said police Inspector-General Muneer Ahmed Khan. He said that as the soldiers began searching homes, they came under gunfire from militants.

In the ensuing battle, three rebels were killed and a police official injured, he said.

As the news of the killings spread, protests and clashes erupted in several parts of the region as residents chanted slogans against Indian rule and in favor of rebels who have fought against New Delhi's rule since 1989.

In an escalating confrontation in the last seven days, at least 10 rebels and four civilians have died in five gunbattles and subsequent anti-India clashes. Two Indian army soldiers also have been killed in a rebel ambush.

Nuclear-armed rivals India and Pakistan each administer part of Kashmir, but both claim the Himalayan territory in its entirety. Rebel groups demand that Kashmir be united either under Pakistani rule or as an independent country.

Anti-India sentiment runs deep in Kashmir's mostly Muslim population and most people support the rebels' cause against Indian rule.

Nearly 70,000 people have been killed in the uprising and the ensuing Indian military crackdown.

In recent years, Kashmiris, mainly youths, have displayed open solidarity with anti-India rebels and sought to protect them by engaging troops in street clashes during military operations against the militants. The anti-India protests and clashes have persisted despite the Indian army chief warning recently that "tough action" would be taken against stone throwers during counterinsurgency operations.

India accuses Pakistan of arming and training the rebels, which Pakistan denies.

Rebel groups have largely been suppressed by Indian forces in recent years and public opposition to Indian rule is now principally expressed through street protests.