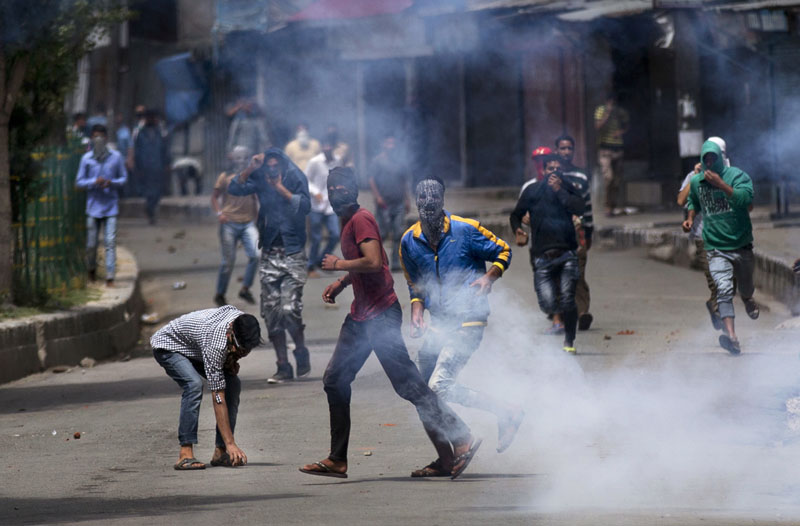 Police said that three rebels were killed overnight as fighting broke out after government forces cordoned off the forested village of Kellar in southern Kashmir.

Thousands on Tuesday participated in funerals for the three militants, chanting slogans including "We want freedom" and "Go India, go back." The villagers also chanted slogans eulogizing militants and hailing Pakistan, which controls a part of the disputed Himalayan territory.

Earlier Monday, police said troops killed a top militant commander in the northwestern Handwara area. A police statement described the slain militant as chief of operations of the Jaish-e-Mohammad militant group. It said he was mastermind of several attacks by the group recently, including last week's strike by militants after they stormed a paramilitary camp near Srinagar's airport. One paramilitary officer and three militants were killed in that fighting.

The Indian army said a soldier was killed after militants fired at a patrol party in the Budgam area on Monday.

Nuclear rivals India and Pakistan claim Kashmir in its entirety.

Rebel groups demand that Kashmir be united either under Pakistani rule or as an independent country. India accuses Pakistan of arming and training the rebels, which Pakistan denies.

Anti-India sentiment runs deep in the region, and most people support the rebels' cause while also participating in civilian street protests against Indian control. Nearly 70,000 people have been killed in the uprising and the ensuing Indian military crackdown.

SRINAGAR, May 7:  Rebels attacked a police squad in the Indian portion of Kashmir, triggering a gun-battle that left three civilians,... Read More...