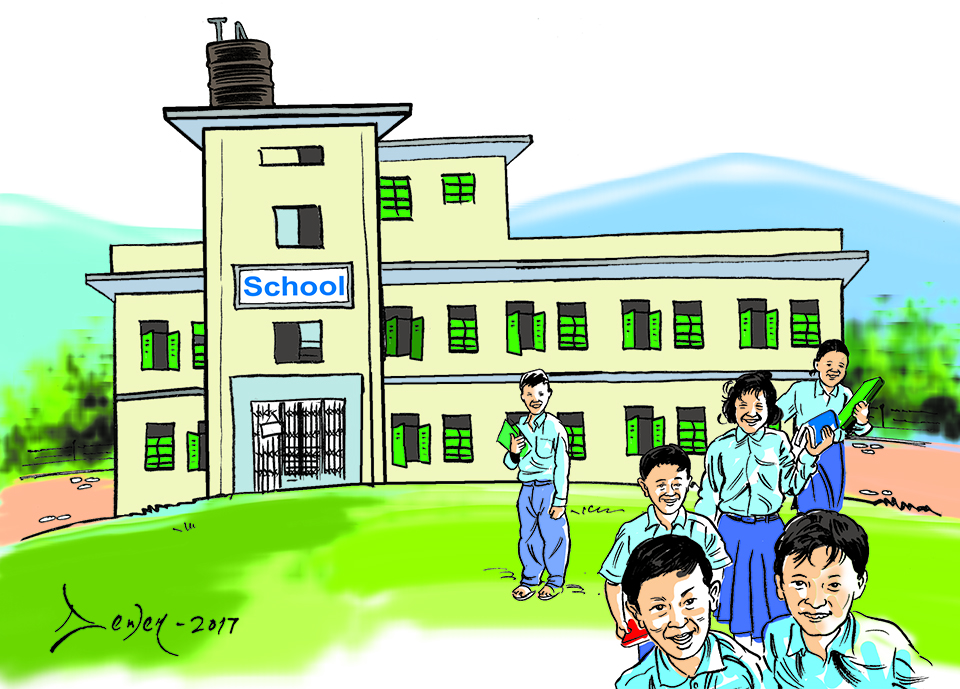 From education minister to education secretary to educationists to teachers, no one wants to enroll their children in public schools if they have option of private schools.

There are two ways to look at our failing public schools that I discussed in my last column (“Destroying public education,” Oct 10). One, public schools have been in such a mess for years and therefore nothing can be done about it. Or since most of us send our children to private schools, why bother about public schools? Let the public schools rot.
This attitude is elitist, feudalistic and irresponsible but it seems prevalent at the moment.
Two, as I have been paying tax to the government, I must ask of it basic but quality health and education services in return. I must speak up against the government that fails to do so. Regrettably, few of us think in this vein.

Prime Minister Sher Bahadur Deuba went to a public school in the remote district of Doti. He completed his master’s degree from Tribhuvan University. CPN-UML chairman K P Sharma Oli attended one such school in Jhapa. So did Madhav Kumar Nepal in Gaur.
Pushpa Kamal Dahal, who taught in a public school for several years before going underground, studied in Narayani Bidhya Mandir in Chitwan. He later received diploma of science in agriculture (ISc-Ag) from Tribhuvan University’s Institute of Agriculture and Animal Science, Chitwan.

President Bidya Devi Bhandari went to public school and college in Bhojpur and Morang respectively. The speaker of the parliament Onsari Ghari Magar completed her school education from a public school in Rolpa.

Current Education Minister Gopal Man Shrestha is the product of a public school in Syangja district. Leelamani Paudyal, considered the most successful chief secretary and currently Nepali ambassador to China, went to Shree Bhawani High School in Palpa. Nearly all of the 597 lawmakers we had in the parliament, and more than 80,000 civil servants working across the country, have their early education in public schools.

These leaders and bureaucrats should have been at the frontline of public education reform. But even those who waged a war against ‘bourgeois education’ have turned their back to this vital need. You don’t find leaders (both those mentioned above and others) sending their children to the kind of schools they went to. The children of Barsha Man Pun and Onsari Gharti, for example, go to St Xavier’s School in Kathmandu.

This is not to suggest that political leaders and public officials should not educate their children in private schools at all. They can. But when those in power tasked with changing public schools themselves ignore those institutions, education is bound to suffer.
Consider this. Since 2006, Nepali Congress, Maoist Center and CPN-UML have led Ministry of Education (Dhaniram Poudel and Dinanath Sharma from MC, Chitra Lekha Yadav and Gopal Man Shrestha from NC, Ganga Lal Tuladhar from CPN-UML, each of them with public education background). The sorry state of public schools is the result of their inaction.

Yet another irony is that our lawmakers allowed a handful of powerful private actors to influence education policies. If they submitted, as is alleged, to Gita Rana (owner of Galaxy Public School), Umesh Shrestha (owner of Little Angel’s School) and Baburam Pokharel (owner of VS Niketan School)—who are said to have bribed political leaders and are blamed for working stalling public education reform—this is nothing but cowardice on their part. It’s hard to believe our lawmakers stood by while the country’s education policy was hijacked by interest groups.

“Things have not improved in our public schools because we have not done even the basics. We have not set the minimum standards for 28,000 public schools regarding classrooms, playground, student-teacher ratio, education budget, libraries and other structures,” educationist Mana Prasad Wagley told me in a telephone interview.
“So while some public schools are housed in concrete buildings others are running classes under open sky or in cowshed-like structures,” he said. “Without first ensuring the minimum standards, we won’t be able to improve quality. Most importantly, we need to ensure that teachers in public schools are competent and qualified.”

Sadly, Nepali politicians are against recruiting qualified teachers. It is for this reason that Education Minister Gopal Man Shrestha and those who supported the faulty amendment of Education Act must never be forgiven.

For me, however, the solution Mana Prasad Wagley suggested is secondary. If we are to enhance quality of public schools, we need to begin with teachers.

From education minister to education secretary to educationists to teachers—none of them enroll their children in public schools so long and private schools are available. We need to make it mandatory for education policy makers as well as teachers of public schools, at least, to enroll their children in public schools as far as practicable. Let us experiment it for five years. If there has to be some incentive for this, let us have that too.
We have submitted the vital task of quality education to those who do not believe in public education. As a result education in public institution has become subject to their whims and fancies, making education a commodity that the poor will get only when the rich are kind enough.

With local governments in place, it should be much easier to enhance the quality of our public schools. The constitution has empowered mayor, deputy mayor of municipalities and chairperson and vice-chairpersons of rural municipalities to devise plans for education reform in schools under respective local units, including designing curriculum. If they start sending their children to public schools they will also make sure that their children receive best possible education.

Private schools in Rwanda are on the verge of closure after the government invested heavily in expanding capacity and teaching infrastructure at public schools, according to a recent report. More than 30 private schools have shut down. Students in private schools decreased from 101,510 in 2012 to 79,076 in 2016 while enrolment in public and government-aided schools almost doubled in the same period in this East African country.
We have our own stories of success. Some public schools—such as Medha Secondary School (Bhaktapur) Gyanodaya Balbatika (Bafal, Kathmandu), Adarsha Saula School (Lalitpur), Bageshwori School (Bhaktapur) Sitala Devi Secondary School (Pokhara), Baruneshwor Secondary School (Rampur, Okhaldhunga) Ganesh Secondary School (Baglung), Padmodaya School (Dang) and Narayani Secondary School (Chitwan)—have been making headlines for their excellent education.
The secret of their success: Teachers are dedicated. The only goal of the management of these schools is improving education quality. We don’t have to shut down private schools to make public schools better.
We have to revive confidence among public school goers that they can become government officials and professionals even by attending public schools. We have to instill hope in them that they won’t end up being exported to the Gulf or Middle East for going to schools, where the sons and daughters of politicians do not go.

With one good policymaker, one honest politician at the helm, a lot can change. We need someone who can imagine his own children lining up for visas to work as laborers in foreign countries, as graduates of public schools do today.

It is not that they don’t know how to improve public education. We live in the age where every solution to every problem is a click away.

They know, they can, but they don’t. This is disgusting.

Federal Democratic Republic came through the sacrifices of martyrs: PM Dahal
26 minutes ago