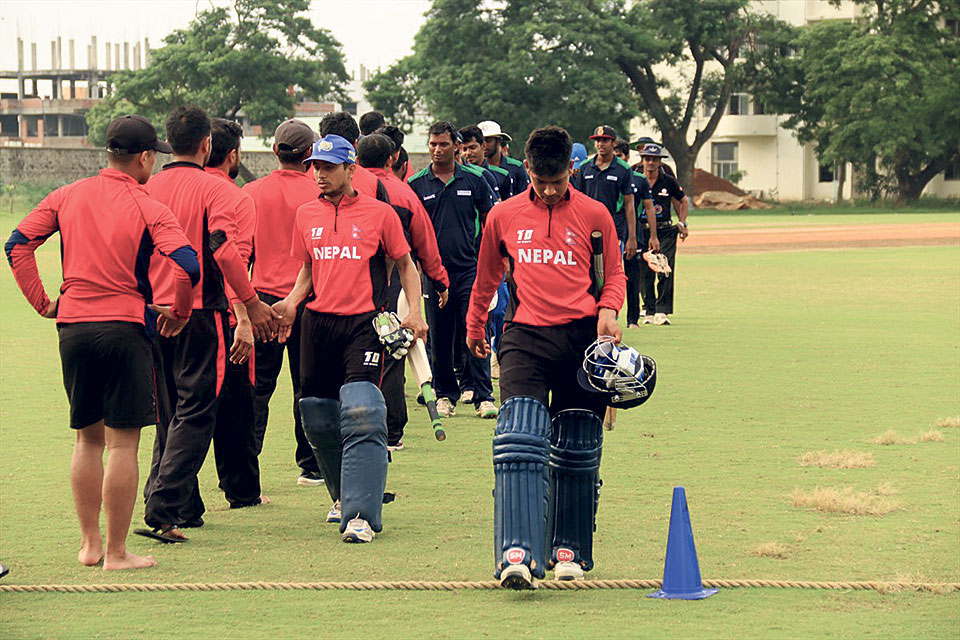 Nepal’s national cricket team players shake hands with the players of Center for Sports Science at the end of their fourth practice match at the Sri Ramachandra Medical College Cricket Ground in Chennai, India, on Monday.

The Nepali team that is preparing for the upcoming ICC World Cricket League match against Hong Kong had recorded three consecutive wins over Indian teams in its previous matches.

In the first two matches, Nepal had overcome Tamil Nadu ‘A’ and Dindigul Dragon by 147 and 52 runs respectively. Likewise, in its third match on Saturday, the Nepali team recorded 147-run win over Melapur Recreation Club.

At Sri Ramachandra Medical College Cricket Ground, CSS won the toss and opted to bat, making a total of 215-10 in the allotted 50 overs. In reply, Nepal was packed for 210 runs in 40.3 overs.

CSS had already lost eight wickets in 33.3 overs with only 89 runs on board. However, Wilkins Victor’s 74 out of 89 balls and two crucial partnerships with L Ganesh and Tusher guided the Indian team to a narrow win over Nepal.

Earlier, opener Ananth made 45 off 72 balls while none of the other batsmen made a decent score. Middle-order batsmen Ganeshan, Arun Balaji, and E Vignesh were dismissed for five, four and seven runs respectively.

Nepal’s Sushan Bhari pocketed three wickets. He was supported by Karan KC and Sandeep Lamichhane who claimed two wickets each. Likewise, Sompal Kami and Sagar Pun bagged one wicket each.

Nepal had made a good start into the innings with the opening duo Paras Khadka and Sagar Pun building up a 84-run partnership for the first wicket. Skipper Khadka struck 49 runs in 40 deliveries that included one six and seven boundaries. Other opener Pun made 69 runs hitting two sixes and seven boundaries facing 69 balls.

Sompal Kami and Karan KC were dismissed for five and three runs respectively while Sushan Bhari and Sandeep Lamichhane returned to the pavilion with four runs each.

Arun Balaji was pick of the Indian bowling as he claimed 5-15 while Victor added other three wickets. Likewise, L Ganesh and Venkat bagged one wicket each.

Fugitive arrested from his house in Jumla
28 minutes ago