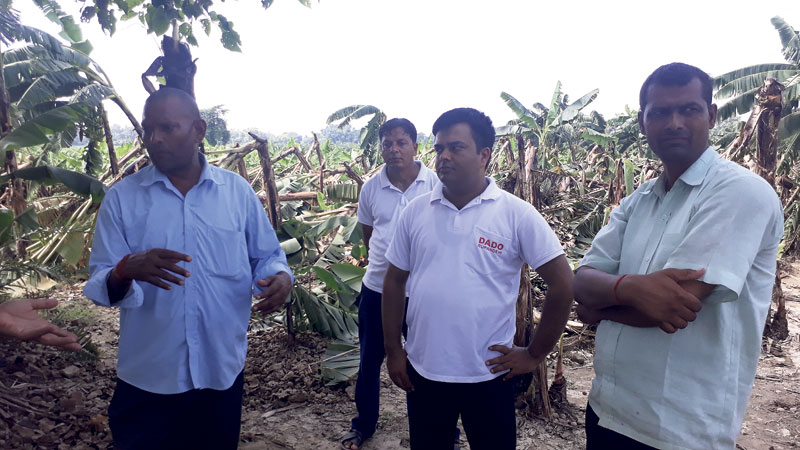 Most of the farmers have suffered as banana crop that was planted targeting the Dashain, Tihar and Chhath festivals have been damaged by the storm. Farmers, who started banana farming taking loan from banks, say they don't have any means to repay bank loans.

Abadh Raj Yadav of Mayadevi-6 said it would now be difficult to make ends meet. “I don't know how to repay bank loans,” he added.

Local farmers had planted banana crop in a minimum of 10 kattha to a maximum of 10 bigaha of land. Some farmers have taken land on lease and secure bank loans to plant banana crop.

The farmers have requested DADO Rupandehi officers to take needful initiative for providing compensation to them. However, Chaudhary of DADO Rupandehi, told Rpublica that the district office do not have relief fund. “We have send details of the damage to the Ministry of Agriculture and the Department of Agriculture, requesting the ministry to compensate farmers for the loss,” he added.

He further added that the DADO Rupandehi has also notified Natural Disaster Relief Fund, Rupandehi, to provide relief to farmers. Only a few farmers in the district have insured their crop.

BIRENDRANAGAR, Jan 26: The Commission for the Investigation of Abuse of Authority (CIAA) has filed a case at a special... Read More...

KATHMANDU, Jan 26: The price of gold has increased in the domestic market by Rs 700 per tola, according to... Read More...