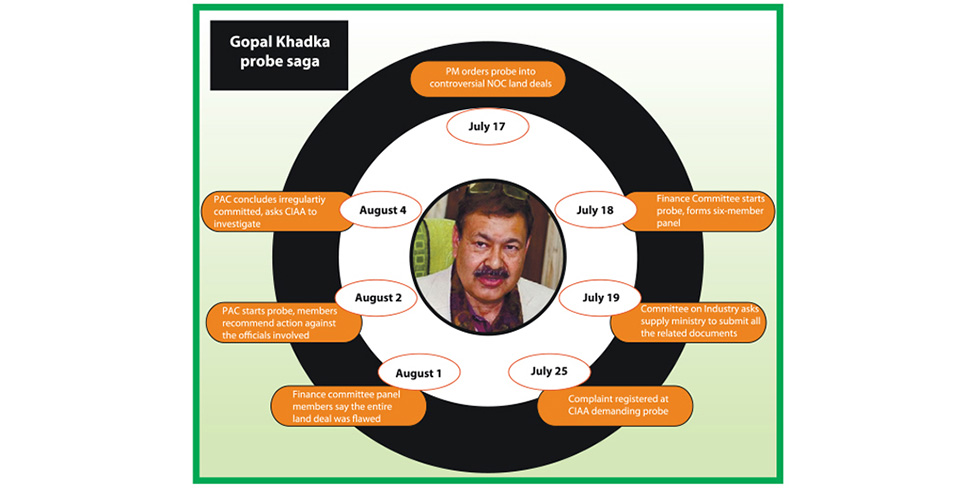 KATHMANDU, August 23: Senior officials at Nepal Oil Corporation receive commissions in the tune of Rs 30 million annually from petroleum product transporters. Transporters are compelled to pay a portion of the amounts they receive from NOC for their services, NOC sources said.

The commissions are collected from different NOC depots across the country while making payments to  the transporters and  NOC staff pass up the amount to  senior officials at the center. Depots pay about Rs 2 billion in  costs every year for transporting petrol from the refineries of Indian Oil Corporation . NOC officials pocket about 1.5 percent of the total amount, or Rs 30 million, according to sources at NOC.

An official at Amalekhgunj Depot informed that the money thus collected is distributed amongst the high-level officials as per the directions of NOC Executive Director (ED) Gopal Khadka.

One transporter also confided that they are paid less than the full transport bill. “We have to pay in cash to the accountants  about 1.5  to 2 percent of the total amount we are paid in  checks,” added the transporter. Those refusing to pay the percentage are likely to be overlooked for the next consignment.

An official at  NOC’s central office in Kathmandu estimates that the monthly collection  is about Rs 150,000 at Nepalgunj Depot and Rs 200,000 at Bhairahawa Depot.

“Likewise, Amalekhgunj, Biratnagar and Pokhara depots send Rs 500,000,  Rs 200,000 and Rs 30,000 each month,” added the official. In addition to this,  officials have to pay some amount for getting assigned to the posts of regional chief. NOC Spokesperson Birendra Goit, however, denied such collections  from depots and from those appointed as regional chiefs. “Let us know if anyone is collecting such amounts from transporters,” added Goit.

OTHER MISAPPROPRIATIONS AT NOC
ED Khadka has been involved in a number of other abuses of authority and corruption at NOC. It seems the silence of the Ministry of Supplies and the parliamentary committees has further encouraged him. Khadka has appointed staff without going through the selection process, and issued new licenses as per his will for LPG refilling stations, new petrol pumps, gas bullets and tankers, among other things.

Khadka has appointed130 additional staff on top of the sanctioned quota of 753, and has curried favor with political party leaders and top bureaucrats. With his appointment, NOC is incurring an unnecessary burden of Rs 20 million per year. It has already been disclosed that  Khadka has received millions in bribes while issuing licenses to New Bhadrakali Petrol Pump at Imadol Lalitpur, Akash Bhairab Petrol Pump at Naubise Dhading, Fatekshwor Petrol Pump at Dolalghat Kavre and half a dozen pumps in Dolakha.

KATHMANDU, Aug 20: Long queues have been seen at fuel stations in the past two days because of the failure... Read More...

Rabi Lamichhane was sued to change the balance of power: Pokharel
23 hours ago

Injured while trying to save man who set himself on fire, woman dies
6 minutes ago