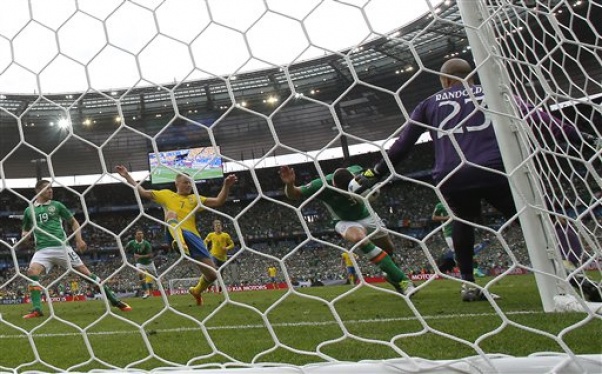 SAINT-DENIS, France, June 14: Zlatan Ibrahimovic, the star who calls himself a legend, saved Sweden yet again.

Even if he couldn't get a goal and set a European Championship scoring record, the 34-year-old Ibrahimovic helped rescue a 1-1 draw after being stifled by an impressive Ireland for most of the match.

Sweden trailed until the 71st minute, when Ibrahimovic glided forward and sent a teasing ball across the goalmouth that Ireland defender Ciaran Clark stooped to head it into his own net.

Though their captain had been far from his best in Euro 2016's biggest arena, Ibrahimovic's yellow-shirted teammates swarmed him to celebrate the goal.

"I give the cross and he headed in the goal," Ibrahimovic said, replying with a chuckling laugh and reference to Clark when asked if it was Ibra magic. "You should ask him."

Ibrahimovic was seeking to become the first player to score in four different European Championships but was limited to half-chances, hooked shots wide in each half.

"We forced him away from our goal as much as we possibly could and it worked a treat," Irelandcoach Martin O'Neill said.

Ireland has taken a deserved lead in the 48th minute of the Group E match when Wes Hoolahan scored from a sweetly struck half-volley from inside the area. Until then, Ireland had followed an early trend at Euro 2016 of teams failing to turn dominance into goals.

"Credit to Ireland, they really showed up," Sweden coach Erik Hamren said through a translator. "We didn't go up to the level that I wished for."

In a group where Belgium and Italy are favored, a point for each team at the Stade de France leaves their Euro 2016 prospects uncertain.

"It does make an awful difference," O'Neill said of not taking three points. "We have matches coming up with two sides that are pretty classy."

"Accomplished," rather than classy, was the word chosen by the often professorial Ireland coach about his team, one usually praised for fighting spirit and endless energy.

Govt made extraordinary achievements in the past one year despite COVID-19 pandemic: PM Oli
2 hours ago