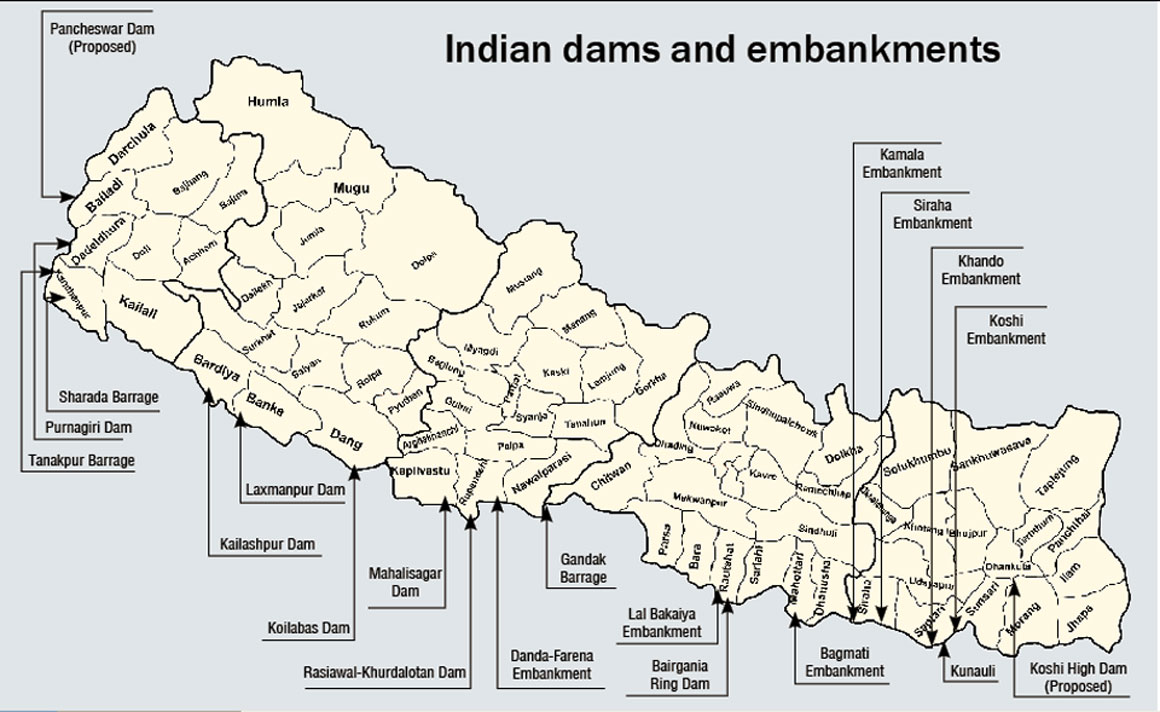 NEPALGUNJ, August 16: Every monsoon season, locals  of the tarai region worry about flood water diverted from barrages, dams and embankments constructed by India. One such structure is Laxampur dam, which, along with the Kalkalawa embankment,  has been causing floods in the Bagauda area of Banke district. After the construction of these structures, around 2,500 bigha of land have been destroyed so far while about 4,000 bigha of arable land has lost  fertility. According to Laxmanpur Dam Victims Struggle Committee, about 60,000 persons have been affected by inundation and soil erosion caused by the dam.

“The Indian government has constructed dams and embankments near the Nepal-India border in contravention of international law, citing security and protection of its own land for doing so. This has been a huge disaster for Nepal as we face floods and inundation  every monsoon,” said Jagadish Bahadur Singh of the struggle committee. “We Nepalis are helpless as our government has remained  a mute spectator.”

Banke has been badly affected due to floods and inundation since the past four days. The recent monsoon-induced disaster, which was triggered by incessant and heavy rainfall, has affected hundreds in the district, according to Singh.

The Banke dam is not the only structure causing inundation in Nepal. India has erected about 18 dams and embankments along the southern border. Border expert Buddi Narayan Shrestha said India has been diverting the major rivers flowing towards it from other counties or within those countries, through the building of canals.

India  plans to divert 37 major rivers  into smaller ones through 30 long canals. “India diverts rivers flowing from Nepal through big damns towards those canals. It has obstructed the natural flow of rivers, causing huge disaster every monsoon,”  Shrestha wrote in his book, "Bharat-Nepal Simabarti Bndh" (India-Nepal Border Dams).

Likewise, Sharada Dam constructed on the Mahakali  in Kanchanpur district has been wreaking havoc in Nepal every monsoon. This 200-meter structure dating back to British rule in India, shuts all its 32 gates during the monsoon when the water level  is very high.

“This diverts the teeming waters of the Mahakali towards the  Nepal side,” said Bahirav Bhatta, a teacher from Bhujela, an area badly affected by the dam. “There is not  a single year when the villagers have not had to abandon  their homes.”

The dam caused huge disaster on June 17, 2008, recall the locals  bitterly. On that day the river flooded over, but the Indians refused to open the dam gates. Locals of Bhujela, Oladi, Pripaiya, Dhodhara and Chadani had to flee their homes to save their lives. However, they could not save their land and other property. “The flood eroded hundreds of bighas of our lands and also washed away our homes. After repeatedly requesting the Indian authorities, they finally opened four out of the 32 gates,” added Bhatta.

India had constructed Sharada Dam on its land for irrigation purposes. The locals are still terrified by the dam. They recently requested the government  to relocate them to a safer place and provide them compensation. However, the government has turned a deaf ear.

Similarly, the Kailashpuri  and Gopiya Dams have been wreaking havoc in Kailali and Bardia districts. Locals said the Indian authorities are very reluctant to open  the dam gates even during the monsoon, and this causes massive flooding in the districts.

“It is okay if the Indians construct a dam  for irrigation purposes. But they do not open the gates when we are being flooded, which is not good. Our government only remains a mute spectator,” said Janak Raj Chaudhary of Rajapur, Bardiya.

India has also constructed dams at Koiralabas in Dang; Mahalisagar  in Taulihawa, Kapilvastu; Dandafarena  in Rupandehi; Gandak  in Nawalparasi; Bagmati and Ratu in Rautahat; Harkatti  in Siraha, Luna  in Saptari; and the Koshi  in Nepal's eastern region. The Nepal government  and local politicians are aware of the problems created by the dams. However, no one has dared to speak out.

Last year, the Janamorcha Nepal alone had expressed concern over the Indian dams and issued a press statement. In the statement,  General Secretary Sadhya Bahadur Bhanari  said, “Our government should request India to destroy those dams and let the rivers of Nepal  flow  their natural courses. We demand proper protection for locals residing in the tarai  and safeguarding of  their lands.”

While the locals face displacement because of the Indian embankments, India has agreed to various terms and conditions to pacify the Nepal government. However, neither does the government of Nepal take any initiative toward  implementation of the agreement nor does the Indian government care about it.