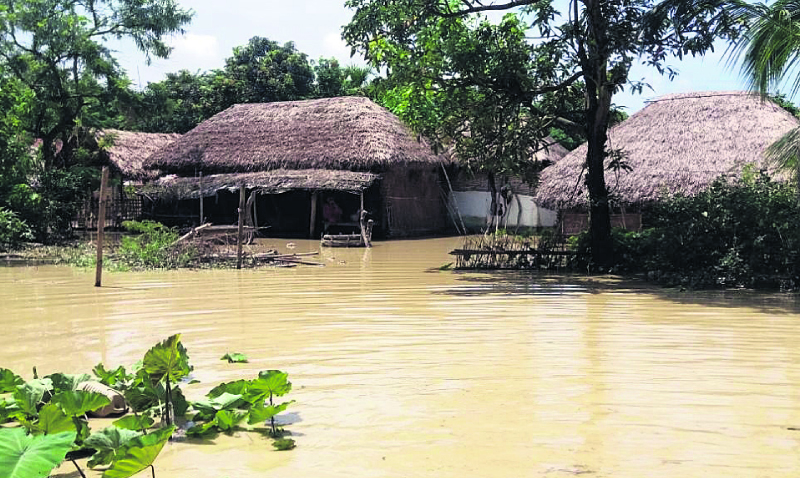 KATHMANDU, Aug 14: Over six millions people have been affected by  flooding and landslides as some parts of the western and central tarai continue to see heavy rains for the fourth consecutive day. Floods and landslides triggered by the rains have wreaked havoc in the districts of the eastern, central and western tarai. Loss of life and property has been heavy.

The  death toll reached  91 as of Monday evening. According to the Home Ministry, 38 persons are still missing and 25 others have been injured. The ministry  mentioned in a press statement that 2,847 houses have been completely damaged and 3,727 structures  partially damaged.

“A committee was formed under the coordination of Home Minister Janardan Sharma  Monday to tally  details of the loss. The chief secretary and secretaries of 12 ministries are members of the committee,” said spokesperson at the Home Ministry, Ram Krishna Subedi.

Various government bodies have reported to the Home Ministry that over six million people have been affected by the floods in densely populated areas and landslides in various hill areas.

At least 21,465 families in over 30 districts have been displaced while another 48, 316 houses remain submerged, according to Nepal Police spokesperson Pushkar  Karki.  The full extent of damage  to  agriculture, including  paddies and livestock and to industry remains unknown.

Deuba’s inspection came amid mounting criticism of the government’s inability to provide timely rescue and rehabilitation to the flood victims and a day after a cabinet meeting announced primary relief measures.

Damage to roads and bridges  along the East-West Highway and local highways has made relief distribution and rescue operations  difficult, said the Home Ministry spokesperson.
According to Republica’s Siraha correspondent, dozen of bridges have  collapsed or are partially damaged in Sarlahi, Mahottari and Saptari districts. This has rendered rescue and relief efforts difficult and also affected travelers. Resumption of transportation, power  and communications has become a challenge for the government.

According to the Home Ministry, some 26,700 people have been deployed for rescue operations in the  affected areas, including 8,300 trained security personnel. The ministry has informed that 5,600 personnel of the Nepal Police, 1,700 from the Armed Police Force and 1,000 from Nepal Army have been deployed.

Victims  stranded in the floods are being rescued by helicopter, motor boats and rafts.  Altogether 13 helicopters have been hired for the rescue operations and for dispatching food and other essential relief materials, according to the government.

In a statement, the Nepal Army said that its rescue and relief  teams have evacuated 5,600 people caught in the floods. Of these, 1,100  were airlifted from various areas as of 4 pm Monday.

The government  said the actual number of displaced families could be much higher as many villages are still awaiting rescue and evacuation. The search and rescue teams have started approaching  the most affected villages from Monday as the rains have slowed down in the eastern and central areas.

Dispatching  assistance and relief materials was difficult in previous days  due to the  heavy downpour.

Security forces have been using helicopters to supply aid and other essentials including food, blankets and medicine. But many  inundated areas still  remain inaccessible.

Economy is on the mend: NRB
53 minutes ago

Revenue collection from mountain climbing doubles this year
3 hours ago