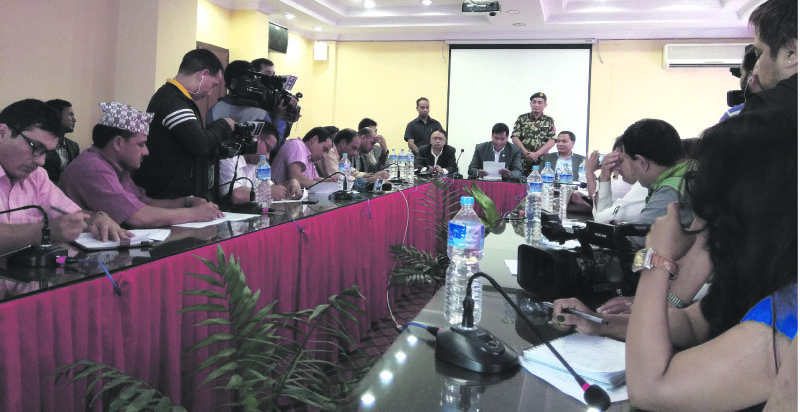 KATHMANDU, Aug 13: Nepal Electricity Authority is producing electricity below the capacity of the power plants because of lowered demand or halted supply in the urban centers of the eastern and central regions of the country.

The industrial estate of Birgunj has lower power load as the industries in Birgunj are not in operation due to floods. On the other hand, the cities of eastern and central tarai have been disconnected from the power network.

Major power plants have been operating below their installed capacities. According to NEA, Kaligandaki with an installed capacity of 144 MW, Madhya Marsyandi with 70 MW, and Marshayngdi with 69 MW have been running to produce only 100 MW, 25 MW and 32 MW, respectively.

Almost all the sub-stations from Bharatpur in the central Nepal to Jhapa in the eastern Nepal have been submerged while a pylon tower of Damak Godhak 132 KVA transmission line has collapsed due to floods. Another pylon tower of 66 KVA near Hetauda Cement plant is on the verge of collapse.

The sub-station of Duhabi is drowned in the floods since Saturday morning, leading to a complete power disconnection to the areas east of it, NEA’s Managing Director Kul Man Gishing told the media at a press meet organized in Kathmandu on Sunday to inform about the effects of flood in the electricity supply.

“This is the probably the first time the country’s power supply system has seen such long disconnection,” Ghising said.

The power system was restored within few hours even after the earthquake of 2015.
“We are yet to assess the extent of damage, and it is hard to predict when we will be able restore power supply in the eastern region,” said Ghising, adding that they had mobilized workforce in the affected areas.

Seeking apology from the customers, Ghising said that they had no alternative to wait for the flood waters to recede before starting the maintenance works.
Many people in the flooded areas have lost telephone connection because there is no power supply to recharge their cell phone batteries.

All electricity imports from Bihar and Tanakpur have been temporarily stopped while the import via Dhalkbear-Mujaffarpur transmission line is at the lowest level because there is very low demand for the electricity.

The electricity demand in Nawalparasi, Rupandehi and Banke is also very low as industries are not operating due to fear of floods.

Gandak power house of 7 MW, which is run on the water of the west canal of the Gandak barrage, has been shut down after the Indian authorities reported there were damages in the canal downward from the powerhouse.

NEA has said that the power supply in the flooded areas have been cut off as a safety measure to prevent electrocution.

Meanwhile, Sunday’s board meeting of NEA has formed and mobilized separate teams region-wise to take stock of the damages and make necessary intervention wherever necessary. A team led by NEA’s board member Chetraj Joshi has been entrusted the role to assess damages and restore supply in the eastern region. Likewise board members Umesh Thani, Chandra Tandan, and Bhakta Bahadur Pun have been tasked with restoring supplies in the central, western, and mid- and far-western regions respectively.

Another distressing year at NEA for power generation