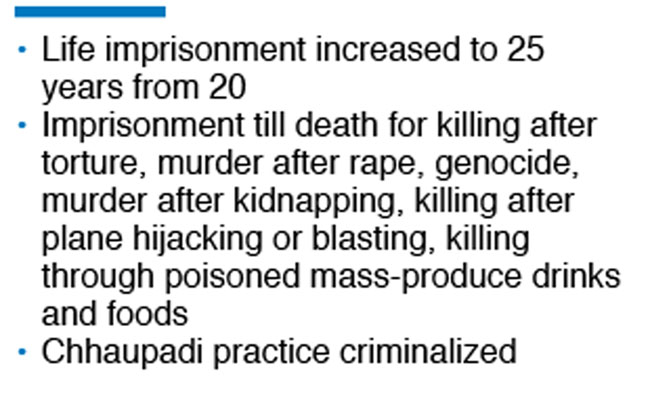 Parliament endorsed the Criminal Code and Criminal Procedure Code on Wednesday and is scheduled to endorse the remaining bills within this week. These bills are ready for endorsement following revision by a parliamentary committee. The bills were registered at  parliament in October 2014 .

“This is a milestone  in the field of legal reform since the promulgation of the new constitution,” said lawmaker Krishna Bhakta Pokhrel, who worked on the bills.

The endorsed bills will be implemented from August 17, 2018 and replace the older laws. The Criminal Code has proposed criminalizing the chhaupadi practice, the dowry system, match fixing, public land encroachment, acid attacks, tampering with photos of individuals, environment pollution, hiring persons for begging alms, and enslavement, among other offences. Though existing law defined such acts as illegal there had been no provision for sanctions.

The bill has provisioned a three-month jail term or a fine of Rs 3,000 for those practising chhaupadi. Under this practice, women going through menstruation or a  postnatal period are required to live in a makeshift outhouse and remain out of contact with  others, males in particular. Many  women and even infants lose their lives due to snake bites, suffocation and other reasons while under chhaupadi.

In a bid to clamp down on the dowry tradition, the endorsed bill has provisioned three years in jail and Rs 30,000 fine  if anyone is found  marrying with  dowry.

The bill has proposed one to two years jail and Rs 10,000 to 20,000 fine for tampering with or distorting the photos of another individual without prior consent. This section was added to the bill following the concern of lawmakers over the increasing trend of distorting the pictures of political  leaders in  social media.

The  bill has provisioned that sentences for corruption, rape, genocide, kidnapping and human trafficking  cannot be commuted.

The new law has increased the eligible age for marriage to 20 years from the existing 18. But couples can marry after 18 with the prior consent of  parents.
Defining the tapping of phone calls as illegal, the new law has provisioned three years  jail and Rs 30,000 fine for violators. Outlawing polygamy, the new law has provisioned a jail term of up to five years and a fine of Rs 50,000 for a polygamous man or  polyandrous woman  if any of them ties the knot in spite of knowing about the existing  marriage of the other party.

The Criminal Procedure Code allows the filing of cases through electronic means and filing a case in Nepal in crimes between Nepali citizens committed abroad.

KATHMANDU, June 10: The House of Representatives has endorsed two bills. A meeting of the lower house of the federal... Read More...

HETAUDA, May 14: Two bills have been passed in Province-3 by the meeting held under the chairmanship of Chief Minister... Read More...