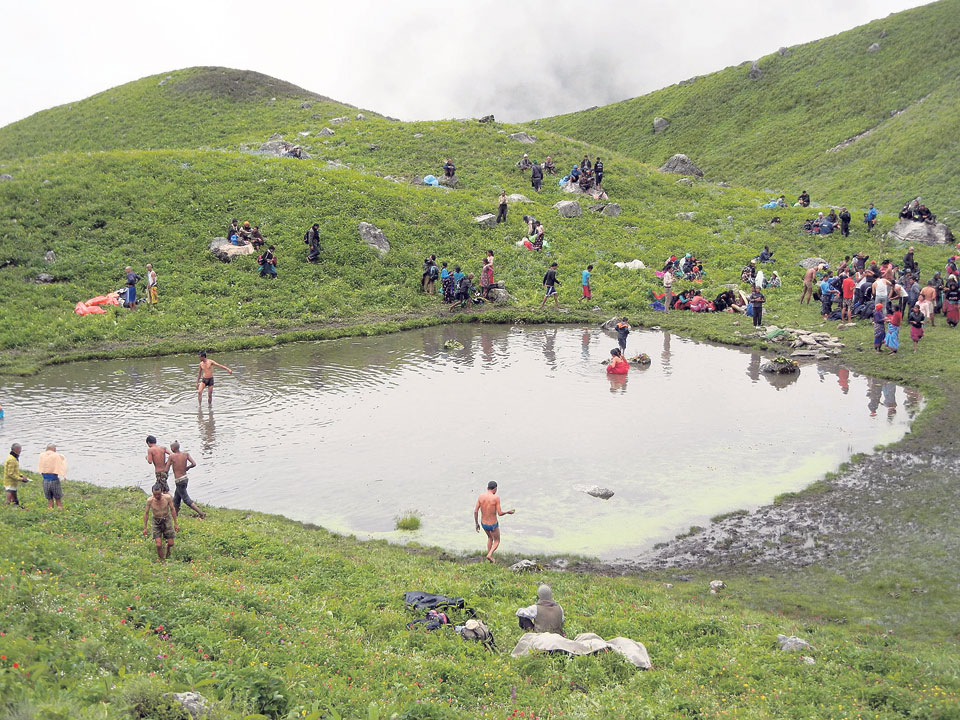 BAJURA, Aug 1: The mountain is 15,000 meters above the sea level. Even in the month of July or August it is not devoid of snow. For most part of the year it is fully covered with white snow. Small towns surround it from all sides at the base. There are numerous ponds in the area. And each of those ponds has their own story related to Hindu deities and devils. Budhinanda is simply a breathtakingly beautiful area in Bajura, whose beauty, however, is yet to be explored by tourists.

The entire Budhinanda region is considered a holy zone for goddess Bhagwati. Special puja is performed here on the day of Janai Purnima every year. From the Bhagwati’s temple, parts of Mugu, Humla and Kalikot districts can be seen. Similarly, the views it offers of the Saipal and Jethibaurani mountains are spectacular and equally breathtaking.

There are dozens of small to big ponds in the region of which some are considered holy and some unholy. The ponds named after deities are believed to fetch good fortune to onlookers. However, locals regard that some of these ponds are home to devils and even seeing them can bring misfortunes to the viewer. Due to this, those who visit the place knowingly ignore the sights of the ponds that are considered unholy.

“Some ponds are for gods and some of them are for devils. Pilgrims should not visit or look at the unholy ponds because in those ponds it is believed that devils reside, take bath. If a person looks at such unholy ponds, some misfortune might befall on them and their families,” said Mukundra Jaisi, a pilgrim spotted recently at Budhinanda. “While crossing through the hills, I also ignored the ponds,” he added.

According to visitors, some ponds are darker than others and the darker ones, locals say, are frequented by evils spirits. “Black ponds belong to the devils,” Jaisi said. The belief is if those black ponds are seen or visited, this can bring ill fate to the entire family of the person. This can also deprive a person from getting desired partner. Overall, the black ponds are considered bad omen. On the other side of the temple of the goddess, holy ponds are located. And visiting and bathing in those ponds is supposed to fetch good fortunes to the faithful.

“We have to take bath in the holy ponds. They fulfill our wishes. I also took bath there,” Jaisi grinned. “Taking bath here also free us from bad karma,” he added.

Despite its apparent beauty and religious significance, Budhinanada remains ignored by policy makers. The government has not even noticed it, locals lament.

“I have visited many places in the country, but this stands out. This is very much important in terms of its cultural, religious and natural values,” said Purbahadur Rawat, a local. “However nothing has been done for its promotion or conservation,” he added.

After Tilicho, ponds of Budhinanda are considered to be ponds situated at higher altitudes. In addition, the beauty of the ponds cannot be expressed in words, Rawat noted. “And yet, it has remained of no value to the government,” he said.

Locals believe that the area has potential to attract huge number of tourists and pilgrims, if it is advertised by the local and central government. According to Rawat, those who visit the place once actually come over again and again. For instance, there are many Indians who love to make frequent trips to Budhinanda. People from Bajura and elsewhere frequently visit the place.

“Some Indians know about it. They love to come here frequently. Those who worship goddess generally find this a special place,” he said. “Similarly, if we talk about internal tourists, people from far western region mostly visit here,” he added.

Rawat stressed that Budhinanda could be a memorable trip for anyone. The blend of natural beauty mixed with high altitude mountains and ponds cannot be seen anywhere else, he said.

Indian tourists to Budhinanda are often from the northern part. They generally get to Nepal from Mahendranagar border point. The belief that the goddess at Budhinanda offers even ‘impossible wish’ draws her diehard devotes to her. Wishes related to marriage, child birth, health and wealth are believed to be blessed by the Goddess.