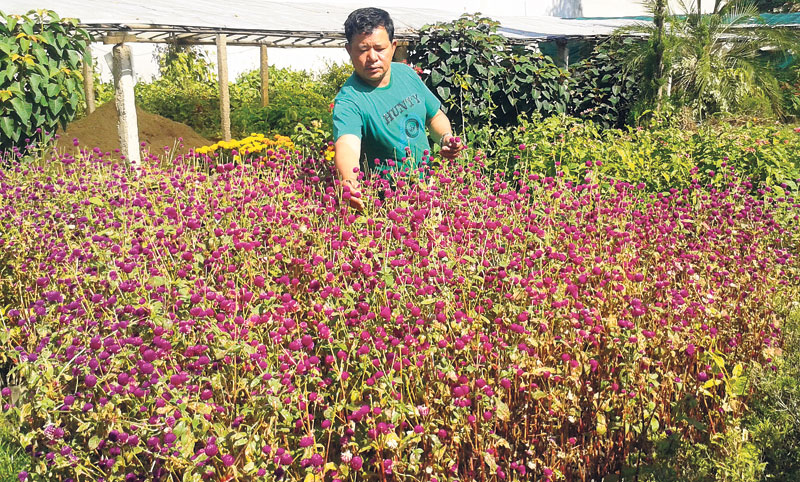 Dil Bahadur Gurung in his flower farm in Birauta, Pokhara. After working in a garden in Malaysia for three years, he returned home and started commercial production of flowers. Photo: Santosh Pokhrel/Republica

POKHARA, Oct 26: Given the soil quality in the plains and the hills of the country coupled with the interest of farmers in floristry, flowers should not have fallen among the items to be imported for any festivals in Nepal. However, something is not in place. The nation imports huge quantities of flowers every year in Tihar and other festivals. As Tihar closes in, traders are struggling to import flowers from India.

In this race, traders in Pokhara alone have imported flowers worth over Rs 5 million from India. The figures reflect the lack of interest among farmers towards floristry. One of the possible reasons behind the apparent lack of interests towards the field, bank officials point, is the lack of awareness among farmers about the loan facilities provided by banks for agriculture, including flower farming.

“Bank provides loan to farmers at very low interest rates for agricultural purposes. For floristry, the interest rate is set at six percent. Yet, very few seek such loans,” stated Bishow Mani Adhikari, chief executive officer at the Om Development Bank. “In Tihar there is huge demand for marigold and other flowers. These flowers could be farmed commercially here in Pokhara itself. But in lack of professional flower farming, the city is importing flowers worth Rs 5 millions.”

Banks have been providing easy loans to farmers to boost agriculture sector as per government policy. Nepal Rastra Bank has mandated banking and financial institutions to provide 15 to 20 percent of loans in productive sectors like agriculture, he informed.

“Despite such provisions, farmers have rarely approached banks for such loans,” he said.
Most of the houses in Pokhara are well structured and have colorful garden. Still, professional farming of flowers remains a potential growth sector, Adhikari noted. He added that more people would have taken interest in flower production if they were aware about the easy loan provisions. “We might have failed to inform the farmers about the facility. Else, farmers and entrepreneurs would have taken more interest in flower production. And we would not have to import flowers for celebrating our festivals”

He informed that banks provide agriculture loan of up to Rs 10 million at six percent interest rates by keeping land in rural area or towns as collateral. “The loan acquisition process is very simple as banks have minimized hassles. The very purpose of the loan is to encourage participation in agriculture. But in lack of interests from farmers to access them, the scheme has remained ineffective.”

CEO of Garima Development Bank, Govinda Dhakal also stated that farmers are missing out on a good opportunity. He stressed that the government should introduce awareness programs for informing the target group about the policy. “The loans are given at low interest rate to encourage participation in the agriculture. But with the targeted population ignorant about the scheme, it has not been effective”

Dhakal added that something like flower should never have been on the import list. “Flower farming is actually loved by many. Only if we could facilitate duly, Nepal would never have to import flowers from India.”

He further stated that the country might export flowers instead if the production is boosted. There is need of better facilitation on the part of the government and zeal among farmers, Dhakal opined. “Finance companies and banks and ready to fully cooperate for this,” he said.

According to entrepreneurs involved in floristry, flowers are cultivated in over 5 hectors of land in Kaski. The production covers a huge portion of the local demand. “We produce flower worth Rs 25 million which is supplied only to the local market. But that’s been not sufficient. We import the remainder from India, particularly from Kolkata,” said Dil Bahadur Gurung, who has been involved in professional farming and sales of flowers since few years.

Reflecting on his personal experience, he said that floristry is quite a profitable occupation. “But without investing labor and significant capital, it cannot take off,” he said, adding that he earns Rs 1.5 million annually through flower production and sales. He had learned floriculture while in Malaysia. He had worked three years in garden there and when he returned home, he started own business. “I’ve taken four ropanis of land for flower farming. It’s giving good return.”

Gurung sells a single flower of marigold for Rs 5 in Tihar. During other seasons, the price is little a bit low, he said. “Flowers are always in demand here. Hotels and resorts buy it for decorations through out the year.”