"Tax Settlement Commission itself was against law" 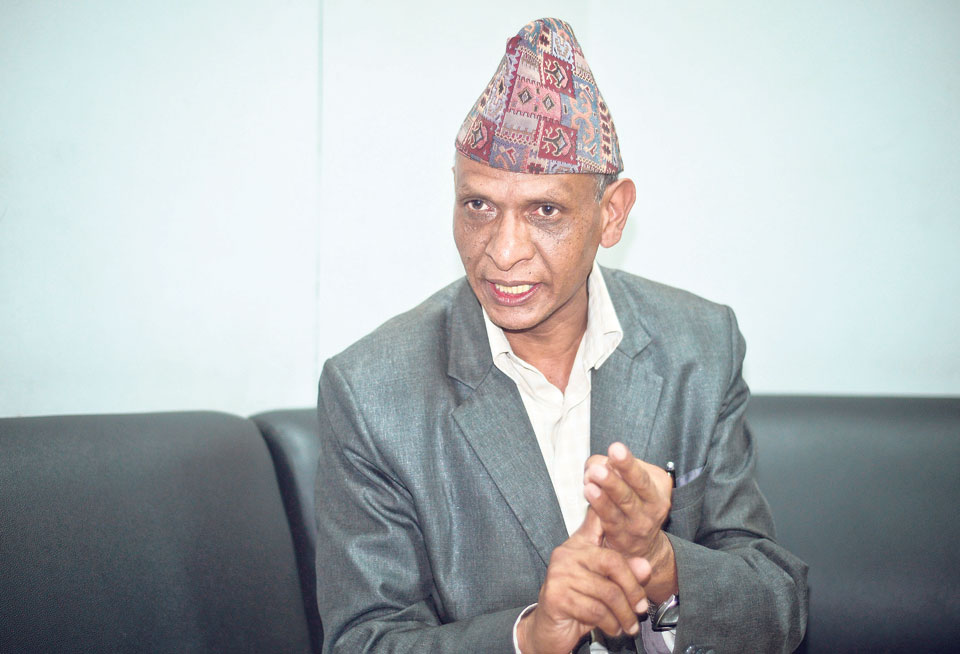 In its 54th audit report, Office of the Auditor General had disclosed in April that controversial tax discounts of over Rs 21 billion were provided to different firms and companies by the Tax Settlement Commission (TSC) led by Lumba Dhwaj Mahat. The commission formed in 2015 had decided on the taxes worth Rs 30.52 billion and settled at Rs 9.54 billion. Erstwhile Acting Auditor General Sukadev Bhattarai Khatri took the decision to disclose the issue although they were under great pressure not to do so.

The audit report has questioned the opaque tax settlement, which incurred huge loss to the government. Commission for the Investigation of Abuse of Authority (CIAA) has investigated the issue and has recently filed corruption cases against all three members of the TSC at the Special Court and it has sought to recover Rs 10.02 billion from each members. TSC’s member secretary Chudamani Sharma is in custody while Mahat and Umesh Dhakal are at large. Republica’s Rudra Pangeni caught up with Khatri to take insight on various aspects of controversial tax settlements. Excerpts:

Can’t the court or any other agency question the decisions of  Tax Settlement Commission?

We should first consider the existing tax laws and the practice of self declaration of taxes. We should pay the taxes accordingly as per the Income Tax Act of 2002. Unlike today’s self declaration practice, tax officials used to determine the tax payable by all the business firms and companies before 2002. The tax disputes could be high because tax officers used to determine the taxes. Now the context is different as taxpayers declare taxes on their own. Tax offices can reassess the taxes if needed. If dissatisfied with such reassessment, the taxpayers can seek legal remedies at three levels.

They can apply for review with director general of the Inland Revenue Department. Then they can appeal at the Revenue Tribunal if dissatisfied again. As last resort, they can go to Supreme Court to address their grievance.  This means, taxpayers have already got ample opportunity to address their grievances and the commission is not needed in the changed context.  On the other hand, only the parliament can waive the taxes and no others can do so, according to the Income Tax Act. The new laws replace old ones, says the legal practice.

Can we conclude that the commission’s decision can be questioned?

What’s the exact loss to the state coffers due to the commission decision?

Upon applications received related to tax dispute worth Rs 40.83 billion, the commission decided on pending taxes worth Rs 30.52 billion only. The commission negotiated at Rs 9.54 billion as payable taxes and waived Rs 21 billion. After the commission’s decision, taxpayers have paid about Rs 6 billion out of Rs 9.54 billion and remaining over Rs 3 billion is not yet paid. It means, the loss to the state coffers is Rs 24 billion.

What are the factors behind such big loss of Rs 24 billion to the state coffers?

Preamble of the Tax Settlement Act 1976 has clearly stated that the commission can be instituted to settle disputed taxes in good faith for the cause of the country’s economic benefit. But the commission has abused the clause of ‘good faith’ stated in the law, which has caused the losses the state.

The commission was meant for settling taxes for the bankrupt and insolvent firms but this commission has waived taxes of the companies and firms that are making robust profits and are being operated by the people living lavish lifestyles. The commission has waived the Value Added Taxes (VAT) worth Rs 770 million to distilleries, hotels and construction companies. The VAT is collected from the customers and should be compulsorily paid to the state within the deadline.

This is only a tip of iceberg we disclosed following a brief study of the commission’s report in our 54th audit report unveiled in April. We are yet to study all the files. The waived amount on VAT is huge, according to our estimate.

What type of a crime the commission has committed by waiving the taxes collected from the customers?

The business houses and companies collected 13 percent VAT promising to pay the amount to the government. But the commission defined it as tax dispute and waived it. Moreover, the commission has surprisingly decided to return already paid taxes through self-declaration system. The commission has returned Rs 78.2 million to 9 taxpayers and such amount could be more.

The commission had ill intention in making such decisions then. Do you agree?

Yes, it has waived the VAT, and also decided to return the taxes from the state coffers. This proves the commission had mal-intention while making such decisions. It’s not only against the tax laws but also a serious crime.

What is your reaction to returning the money from the state coffers?

It’s quite difficult to understand why they decided this. At the same time it is also interesting to note that a business firm has got waiver of 99.05 percent. The disputed tax amount of a distillery was Rs 3.29 billion but it was settled at Rs 39.9 million. Statistics show that a firm has been asked to pay only Rs 10,000 in a tax dispute of Rs 446.6 million.

Business people were appealing repeatedly to the government for setting up commission for one time. Isn’t this settlement report unfolding the mystery behind their plea?

Take an example of three firms of the same type named A, B and C and almost equal amount of the taxes they owed to the government. Let’s say annual transaction of each firms was worth Rs 10 million and their profits were also similar. Firm ‘C’ paid taxes as per law and in time but ‘A’ and ‘B’ did not. They rather waited for the set up of the commission to get waiver. If we allow practices like this, then it can grow into an epidemic for the country’s taxation system.

Can the government recover the settled taxes in this way?

The commission has already negotiated on the disputed taxes and settled through a contract signing. It is not practical to recover.

Are those who allowed such illicit waiver are the culprits?

You can understand it easily. I don’t have to state this.

Do you mean the business firms can be aloof from it but not the people in the commission?

This is a case under judicial review. Let us not comment on it.

Hasn’t the commission followed its own guidelines while settling the tax disputes?

No, it has not followed. It has waived only around 35 percent taxes to the government entities while the private businesses and firms have got 99 percent tax discounts. It is evident that it did not follow its own guidelines and decided without any rationale.

Why was the commission given more authority than permitted by the law?

Yes, the commission was given more authority. In 2008, in a meeting of the Public Accounts Committee, erstwhile secretary of Ministry of Finance and deputy auditor general had pledged not to form such commission but the government formed it.

Does the Income Tax Act 2002 forbid forming of such commission?

The act restricted anyone going beyond this law. As the clause 142 has clearly stated that no one except the parliament can reduce, increase or waive tax. The commission was formed despite the provision of three agencies-- director general of Inland Revenue Department, Revenue Tribunal and the Supreme Court -- for appeal. The Income Tax Act 2002 has no provision for the commission. Had it (the act) thought about formation of such commission, it would not have provided for the three agencies for appeal.

Did you receive any pressure from the political quarters and business communities to not disclose the works of the commission in your audit report?

The government provided the commission’s report only after we complained at the parliamentary committee. Various government agencies made delays to provide details against our efforts to assess the taxation of a telecom company. We decided that taxes were due although the cabinet had decided to waive it. We were pressurized to omit both issues but we replied them that we were putting it in the report anyway.

Is erstwhile Minister for Finance Ram Sharan Mahat responsible for these decisions? Is he clean?

Mahat himself had contributed to bring in the Income Tax Act 2002. He should have known that there was no rationality for the Tax Settlement Commission after the Act came into effect. Why did he institute such commission which he knew was against the Act? I do not understand it. It’s better to ask him.

KATHMANDU, June 20: The Commission for the Investigation of Abuse of Authority (CIAA) has issued arrest warrants against Tax Settlement Commission... Read More...